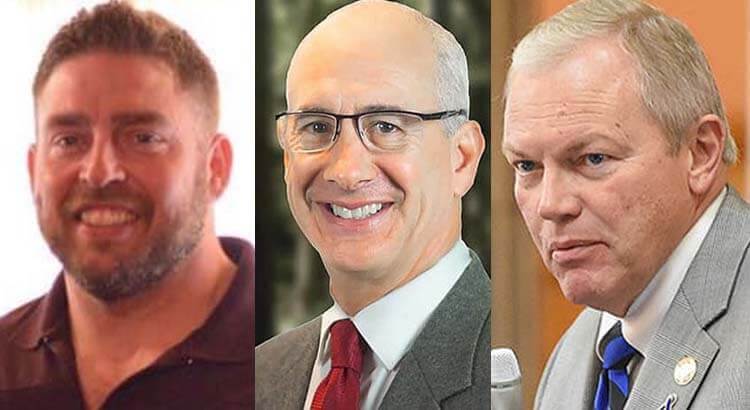 There are now three candidates voters will be able to choose from in the race for the 26th district state Senate seat up for election this November.

TiffinOhio.net has learned that 42-year-old Robert Taylor, a Marine veteran from Bucyrus, plans to officially launch a write-in candidacy for the seat on Monday.

Taylor, who supported conservative activist Melissa Ackison in her unsuccessful primary bid for the seat, says he is running as a “true constitutional conservative” candidate who is pro-Second Amendment, pro-life, and pro-Trump.

Due to running as a write-in candidate, Taylor’s name will not appear on the November ballot. Instead, a write-in space will appear alongside the two candidates who will be on the ballot in the race: Craig Swartz, a Democrat from Upper Sandusky, and state Rep. Bill Reineke, a Republican from Tiffin.

In a Facebook Live video posted to his personal page Friday, Taylor shared his plans with friends and family ahead of Monday’s official announcement.

“I am officially a write-in candidate for Senate district 26 in the state of Ohio,” Taylor said in the video before going on to slam Reineke and the Ohio Republican Party for being “corrupt.”

Taylor hit Reineke, a car dealership tycoon who is currently serving his third term in the Ohio House, for cosponsoring House Bill 6, the energy bailout legislation at the center of what is being called the biggest corruption scandal in Ohio history. Taylor also took aim at Reineke for having his car dealership business passed down to him from his parents.

“Bill Reineke was the cosponsor of [House Bill 6], and what’s that say? Here’s a guy who runs a big time auto dealership over there, Reineke Auto, or whatever the name of that place is. It’s my understanding that was a hand-me-down business. His parents passed that onto him,” Taylor said. “And that’s okay, but that’s what I’m saying. How many of you have had a parent to hand you a million dollar business, help you out, get you started? I’m a working man. I’m working-class.”

Taylor says one goal of his campaign is to see if a “common man” can make his way to the Ohio General Assembly.

“We need common people, the working man,” Taylor said in the Facebook Live video. “Somebody has to do it. Somebody has to do it, and I guess I’m that guy. Nobody else is stepping up, I don’t see any other common people trying to run and go down here to the statehouse and tell these clowns what we actually think. Because we are overtaxed and underrepresented.”

Taylor is expected to officially announce his candidacy and file paperwork with the Ohio Secretary of State’s office on Monday.