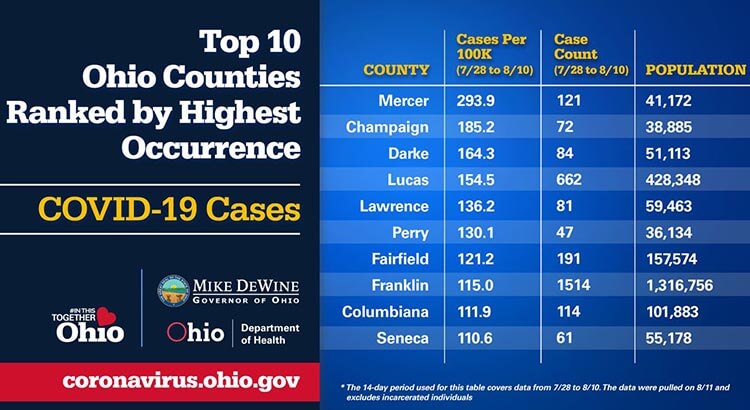 Seneca County has the tenth-highest rate of community spread, with 110.6 cases per 100,000 population.

There have been 61 new cases reported from July 28 through Aug. 10 in Seneca County, according to state health officials.

The Seneca County General Health District reported Tuesday that there are a total of 230 coronavirus cases in the county.

Four people have died with COVID-19 in Seneca County as of Tuesday, and there are nine people currently hospitalized.

Gov. Mike DeWine said during his Tuesday COVID-19 press briefing that events such as weddings and the Tiffin Flea Market are part of the reason why Seneca County is ranked among the top 10 counties with the highest community spread of COVID-19.

DeWine’s reference to a long-term care facility outbreak is regarding St. Catherine’s Manor of Fostoria, which has a cumulative total of 26 cases among residents and five cases among staff as of Aug. 5.

Here is a closer look at the top ten counties with the highest number of cases per 100,000 people. ⬇ pic.twitter.com/hetnGoKmJV