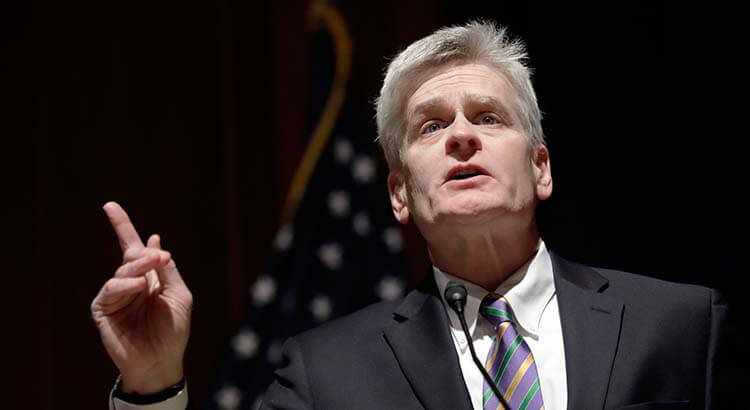 WASHINGTON – GOP Sen. Bill Cassidy is making a strong push to rescue ailing state and local governments in a fifth coronavirus relief bill — but his party’s leaders are resisting as they debate the contours of the next package.

The freshman senator is pressing Senate Majority Leader Mitch McConnell (R-Ky.) for $500 billion in assistance and urging the nation’s mayors to lobby for aid to cities and states.

In an interview with the Illuminator, he said he told mayors Monday on a call with the National League of Cities to “show ‘em your books.”

“Show them that this time a year ago this is how much you got, and this year you have far less. And because of that, you’re gonna have to lay off police officers and firefighters and teachers,” he said.

Cassidy conceded that Republicans and Democrats remain far apart on the issue, but he is nonetheless holding out hope for a compromise.

“They are keeping cards close to the vest but they want to get a deal,” he said.

In May, House Democrats dpassed a $3 trillion coronavirus relief package that included $1 trillion in aid to state, local, territorial and tribal governments.

Senate Republicans called that package “dead on arrival” and have raised objections to aid for cities and states and other provisions.

On Tuesday, McConnell on the Senate floor called the House provision a “trillion-dollar slush fund for states” and labeled Democratic negotiations over the package a “charade.”

Senate Republicans offered their own $1 trillion coronavirus relief proposal last week, which contains no new aid for cities and states. The package does allow for more flexibility in spending funds approved for cities and states earlier this year and includes some education funding that would go to local governments.

The parties’ different approaches to the issue have been a flashpoint for months.

In March, Congress approved $150 billion for cities and states in its $2.2 trillion coronavirus package. That funding only applies to municipalities with more than 500,000 people and doesn’t allow officials to use the funds to plug budget shortfalls.

This spring, McConnell characterized calls for more federal aid for cities and states as a “blue-state bailout” and said he would be open to allowing states to file for bankruptcy.

The comments set off intense bipartisan criticism from officials across the country.

“This is a red-white-and-blue pandemic,” National Governors Association Chair Larry Hogan (R-Md.) and Vice Chair Andrew Cuomo (D-N.Y.) said in a joint statement in May. “The coronavirus is apolitical. It does not attack Democrats or Republicans. It attacks Americans.”

On July 31, the executive directors of a group of nonpartisan associations representing state and local government slammed the GOP package in a CNN column. The package, they wrote, “ignores the economic realities in states and localities by not providing much-needed critical aid.”

McConnell suggested in April he might be open to such aid in exchange for legal protections for businesses and workers but has raised stronger objections since then. On Tuesday, he pointed out that states and localities have only spent a quarter of the funds already approved for them.

Trump said this spring he may be open to more state and local funding but later backtracked. “Why should the people and taxpayers of America be bailing out poorly run states … and cities, in all cases Democrat run and managed, when most of the other states are not looking for bailout help,” Trump tweeted in April.

House Speaker Nancy Pelosi (D-Calif.) in a call with members on Monday expressed confidence that Congress would pass additional aid to cities and states but said the GOP just “doesn’t know it yet,” according to CNN.

In the meantime, state and local governments are grappling with the health crisis as infections surge and, at the same time, pay teachers, first responders, trash collectors and others who provide essential services at a time when revenues have plummeted.

“The tax base has been destroyed,” Cassidy said earlier this year. “We need to prime the pump so that basic municipal services can be in place.”

Cassidy’s solution is a $500 billion stabilization fund for states and municipalities — a number he said Monday represents the “exact middle ground” between Republican and Democratic proposals for additional aid to cities and states.

In May, he introduced a bill with Democratic Sen. Bob Menendez (D-N.J.) that would create the fund. The bill would divide the $500 billion into three equal tranches — one that would allocate funds by population, another by infection rate and a third by revenue losses.

Under the plan, each state and the District of Columbia would receive at least $1.25 billion, and the money could be used to stem revenue losses.

“Democrats and Republicans are pretty far apart in terms of their leadership,” Cassidy said. “I do think that as they look for compromise, common ground between the two parties, we are where they could reasonably land.”

Cassidy’s proposal followed pleas for help from the National Governors Association, which supports the bill.

Five other senators have signed on to Cassidy’s bill:  Democrats Cory Booker of New Jersey, Joe Manchin of West Virginia and Kyrsten Sinema of Arizona and Republicans Cindy Hyde-Smith of New Hampshire and Susan Collins of Maine. And Cassidy says support for the bill in the upper chamber goes deeper.

He also said some House Republicans support aid for cities and states but that he is focusing his advocacy efforts on the Senate. “Right now, my play is more with my Republican senators,” he said.

Support for the effort will grow as need becomes greater and more apparent, he predicted.

“This is a process,” he said. “We’re trying to position ourselves that when you’re looking to find common ground, we are the common ground.”