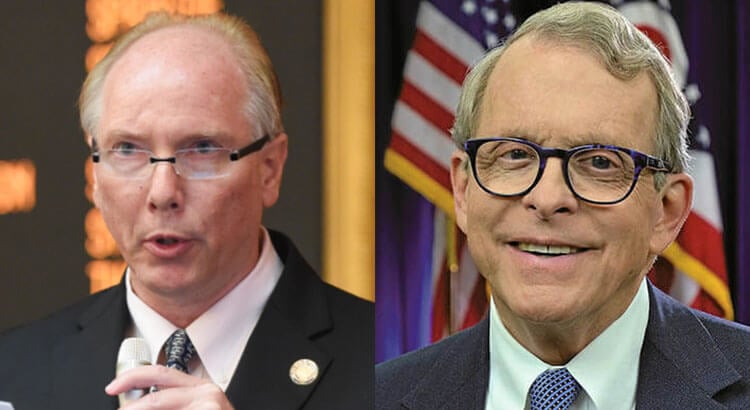 A group of conservative Ohio lawmakers are calling for the impeachment of Governor Mike DeWine, a Republican, over his actions in response to the ongoing coronavirus pandemic.

State Rep. John Becker (R-Clermont County) announced Monday that he has drafted ten articles of impeachment against Gov. DeWine and is asking all of his House colleagues to join him in “ending the madness.”

Becker’s office said in a news release that he is the main sponsor of legislation that is cosponsored by Reps. Candice Keller (R-Middletown), Nino Vitale (R-Urbana) and Paul Zeltwanger (R-Mason).

“Governor DeWine has violated the Ohio and United States Constitutions, as well as multiple sections of the Ohio Revised Code. Among his abuses of power, he meddled in the conduct of a presidential primary election and arbitrarily closed certain businesses, while allowing other businesses to remain open,” Becker claimed in the news release. “He later instituted a statewide mask mandate, implementing that requirement as a condition of employment, making Ohio a hostile work environment,” Becker said.

Becker says voters who are fed up with DeWine should contact their state representative via ImpeachDeWine.com, a website that contains a contact form with sample language for people to send to their respective state representative asking them to sign onto the legislation as co-sponsors.

“Gov. DeWine is focused on saving lives during the pandemic,” Dan Tierney, the governor’s spokesman, said in response to the impeachment effort. “He is also focused on helping our economy and getting Ohioans back to work. He is not focused on this resolution.”

Becker said he had hoped impeachment wouldn’t be necessary.

“I kept holding out hope that we wouldn’t get to this place,” Becker said in the release. “For months and months, I’ve been hearing the cries of my constituents and of suffering people from every corner of Ohio. They keep screaming, ‘DO SOMETHING!’ They are hurting. Their businesses are declining and depreciating. Their jobs have vanished. The communities that have sustained their lives are collapsing, and becoming shells of what they once were.”