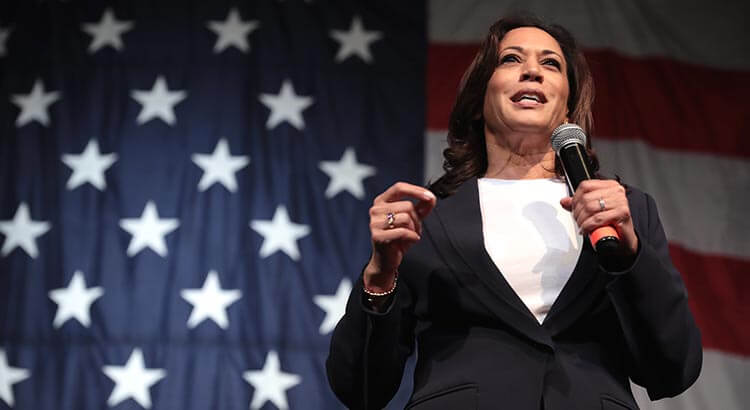 If there is a more authentically American story than the one of U.S. Sen. Kamala Harris, you’d have to make it up.

Last Tuesday, the California Democrat, the daughter of Jamaican and Indian immigrants, became the first Black woman in American history to be named to a presidential ticket. And across the United States that day, Black women, who saw themselves reflected in Harris’ eyes, rejoiced.

“I’m so excited I can hardly talk,” former Philadelphia City Council member Marian B. Tasco told the Philadelphia Inquirer. “For us to have an African American woman be a candidate for vice president, that is just so exciting for me, having worked so long in the political arena.”

Harris, 55, who made national headlines with her briskly efficient evisceration of then-U.S. Supreme Court nominee Brett M. Kavanaugh in 2018, emerged as an early favorite in the veepstakes when former Vice President Joe Biden announced he intended to choose a woman, likely a woman of color, as his running-mate.

It’s long past absurd that America stands nearly alone in the industrialized world for never having put a woman in the Oval Office — and yes, Clintonistas, I hear you, the popular vote numbers in 2016 said it all. That does not mean Harris joining the 2020 ticket is any less epochal.

Harris, who enjoyed a close relationship with Biden’s son, the late Delaware Attorney General Beau Biden, when she was the Golden State’s top cop, survived a culling process that sometimes threatened to be reduced to a mere popularity contest as various — and vastly qualified — contenders waxed and waned.

As The Washington Post’s Karen Tumulty wrote Wednesday, the very qualities that some believe hampered Harris’ short-lived presidential bid — that she is cautious and deliberate — are the very attributes that make her an ideal running-mate for Biden, who will benefit from her counsel should he win the White House in November.

But crucially, in choosing Harris, Biden picked a running-mate who will meet where the country where it is now: A multiracial and multiethnic republic, where the voices of Black and Brown people have been raised and are, rightfully, prominent, and who will shortly become the majority of the population.

Harris, like President Barack Obama before her, brings an intimate knowledge and understanding of that changing America.

During last August’s Democratic debate, she took Biden to the woodshed over his opposition to busing,  forcefully arguing that it was a ticket to opportunity for hundreds of thousands of Black children just like her. She and Biden later mended fences over that televised moment of confrontation.

While she’s not without her flaws — Harris has been forced to reconcile her calls for police reform during this tumultuous summer of change against her career in law enforcement — Harris is a living refutation of the crass and hateful nativism of the Trump administration.

As he has struggled to brand Biden, a nickname that won’t be printed here was changed in a new round of ads that debuted Tuesday, Trump will similarly struggle to brand Harris.

That’s due in part to changing American attitudes about race and race relations (a majority of Americans support the Black Lives Matter movement), but also because of the policy ground Harris has staked out during her time in the Senate.

Like Biden, a Senate veteran before his ascension to the vice presidency in 2008, Harris is largely a moderate Democrat who will defy Trump’s efforts to paint her as some empty vessel for the party’s progressive wing.

Trump has so far failed to tar Biden with that same brush, though that has not stopped the Conspiracist-in-Chief from trying to craft a Bizarro World Biden who’s held in thrall by The Squad.

Nor is it likely that Harris will wilt in the face of any presidential Twitter storm. Her questioning of Kavanaugh reminded the nation of her prosecutorial bona fides. They were cemented with Twitter shade of her own, when she clapped back at Trump “Don’t worry, Mr. President, I’ll see you at your trial.”

Finally, though it seems grim to talk about it, Harris has the experience and expertise to step in if Biden, who will be 78 by the time of his possible inauguration in January, is incapacitated and unable to serve.

Biden has described himself as a “transitional candidate.” And in Harris he has found an ideal partner to whom to pass the baton.

As much as Trump has tried to move the country backwards, putting up walls, withdrawing America from the world stage, and hearkening back to a segregated past, Harris is a living reminder that the arc of history is always forward-moving.

She’s America as it is now, and will be in the decades to come. Trump is an unpleasant chapter the country can’t move past quickly enough.

John L. Micek is the Pennsylvania Capital-Star’s Editor-in-Chief. He’s been covering Pennsylvania politics for more than 20 years and most recently served as Opinion Editor at PennLive/The Patriot-News in Harrisburg, Pa. Micek’s commentary is syndicated to more than 800 newspapers nationwide by Cagle Syndicate. And he’s a regular contributor to a host of broadcast outlets in Pennsylvania and abroad. Follow John on Twitter @ByJohnLMicek.