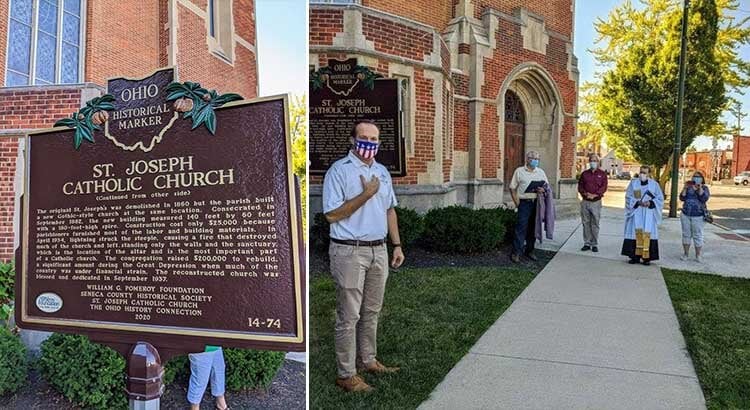 The church is celebrating its 175th anniversary this year, and it was awarded a state of Ohio historical marker to help commemorate the occasion.

“St. Joseph’s was constructed by immigrants and has endured through wind storms and fires to become one of the more recognizable landmarks in Downtown Tiffin. Congratulations to the entire parish on this wonderful anniversary,” Montz said.

“St. Joe’s is resilient. The video that’s out that describes the fire and the rebuilding, I think it’s only appropriate that this monument is now being dedicated during this pandemic. Because St. Joe’s is resilient, and even though we’re struggling now, better things will come,” Thomas said.

The historical marker states that St. Joseph Catholic Church has been located at 36 Melmore St. since the parish’s formation in 1845.

“Tiffin was established by Josiah Hedges in 1822, and shortly after, many German Catholic families began to settle in the area. They formed part of St. Mary’s parish until 1845, when they obtained permission from Bishop John Purcell of the Diocese of Cincinnati to organize as the separate congregation of St. Joseph,” the marker states.

“In May 1845, parishioners bought two acres of land at the conjunction of Melmore and South Washington Streets. Within the month, they laid the cornerstone for a 40-foot by 66-foot brick church that would be completed by August of that year. As the congregation grew, Rev. Joseph Bihn, pastor from 1856 to 1873, saw the need for a new church.

“The original St. Joseph’s was demolished in 1860 but the parish built a new Gothic-style church at the same location. Consecrated in September 1862, the new building measured 140 feet by 60 feet with a 180-foot-high spire. Construction cost only $25,000 because parishioners furnished most of the labor and building materials.

“In April 1934, lightning struck the steeple, causing a fire that destroyed much of the church and left standing only the walls and the sanctuary, which is the location of the altar and is the most important part of a Catholic church. The congregation raised $200,000 to rebuild a significant amount during the Great Depression when much of the country was under financial strain. The reconstructed church was blessed and dedicated in September 1937.”