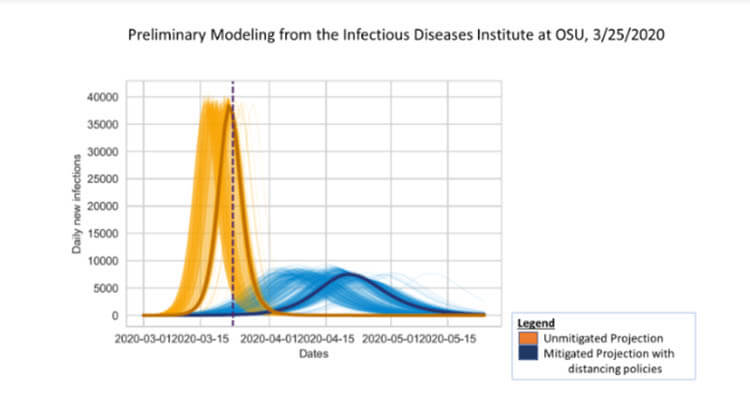 When the Ohio Disease Reporting System began tracking contagion in the Buckeye State, Harry Potter hadn’t yet made it to the big screen and people listened to music on CD players.

Clinical labs, local health departments and Ohio hospitals pour data on the more than 112,000 COVID-19 cases in the state into ODRS, which makes its way to the Ohio Department of Health’s coronavirus website. The database tracks a wide spread of other infectious diseases from cholera to Crimean-Congo hemorrhagic fever.

ODH deployed the database in September 2001. It was set to be replaced this fall, though the plan was shelved due to the pandemic that has killed nearly 4,000 Ohioans since March.

The complexities of responding to an outbreak of a virus that can kill victims and spread asymptomatically has revealed key blind spots in the system.

When the Ohio Restaurant Association made a dubious claim that there’s no evidence linking Ohio’s eateries to COVID-19 outbreaks, ODH officials denied the claim, but couldn’t say how many cases traced back to the industry.

An ODH spokeswoman estimated at the time there were 50 known bar and restaurant outbreaks but called the figure an “incomplete picture.” She explained ODRS isn’t built to answer this kind of query.

Brian Fowler, ODH’s chief data officer, said in an interview the database mainly tracks cases by patient, and possibly by specific outbreak — assuming a local health department detects the outbreak and codes the individual cases to it accordingly.

“I think over the years, we have tried to put as much in there as we can to track different things,” he said. “We’ve never had a situation where we’ve had this many reports coming in for a new disease we don’t know much about.”

Plus, the contours of a specific outbreak aren’t always as defined as one might hope, Fowler said. Say five COVID-19 cases were all at a bar together. Is that a bar outbreak? What if they all went to the same grocery store too?

“It’s hard to sort of lump and split outbreaks,” he said. “When you have a big pandemic like this, and you have widespread disease transmission, is the bar an outbreak? Or is the outbreak the whole community’s? Local health departments have to decide these things as they go, and that can lead to confusion.”

Similarly, Fowler said ODRS can’t produce data on how many known exposure sites are workplace vs. non-workplace — a finding that could reveal if the disease is spreading because people are going to work, or making lifestyle choices that enable its spread.

Gov. Mike DeWine has walked a line between urging religious institutions to adopt preventive practices like social distancing but refusing to issue orders that could strain constitutional religious freedoms.

But in terms of persuasion, DeWine can’t count on Ohio’s massive realm of coronavirus data to answer the obvious question of how many Ohioans were in fact infected at church.

At a press conference, he used a visual display of a church outbreak (compiled and contact traced by the local health department) showing the web of 91 cases all tracing back to a single infected churchgoer.

Earlier this month, DeWine described frustrations with the inability to mine ODRS for data, and described a workaround of calling local health department for information.

“Data related to outbreaks is, frankly, under the current system at [ODH], not very easy to get,” he said. “The ODRS was designed to look for broad categories, not by setting.”

Fowler acknowledged it’d be nice to have more data, but emphasized ODRS is putting out more information on a disease than it ever has.

“Does having additional data help for persuading people? Of course it does,” he said. “But we have the data we need to say this disease spreads if you’re close to somebody, so try to avoid those types of locations as much as possible.”

While there are holes, ODH publishes unprecedented amounts of information on the coronavirus itself and its downstream effects on Ohio’s health care systems.

For instance, of the 22,000 Ohioans tested for COVID-19 on Tuesday, 3.8% of those tests came back positive, suggesting Ohio is in better control of the outbreak than in mid- to late-July.

There were 894 coronavirus patients in Ohio hospitals Wednesday, and more than 5,700 available beds, a sign that hospitals aren’t facing excessive strain for now. Users can drill down further into ICU beds specifically, or how many ventilators are available. 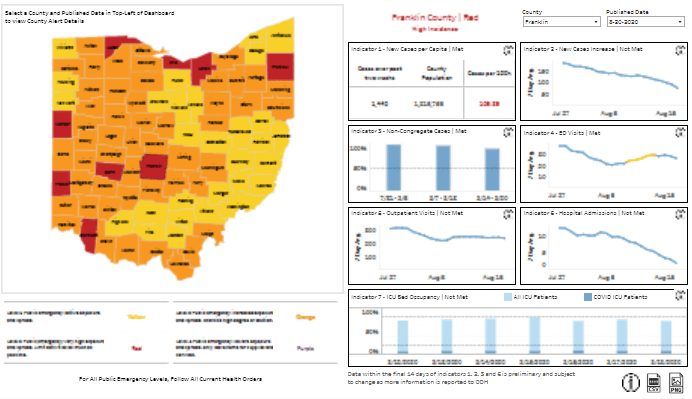 Fowler said there’s more to come. He said Ohio will soon publish county-by-county test positivity rate data (the higher the rate, the more likely it is that cases are being missed). He said other updates are coming but declined to specify.

Despite this plethora of data, conspiracy theories centered on the pandemic have flourished in recent months, fueled in part by misinformation on social media and right-wing politicians, and echoed by President Donald Trump.

In a high-profile example, a person on Twitter erroneously and baselessly alleged Ohio counted one senior citizen as 15 cases. The Laura Ingraham Angle, a popular conservative television program, aired the allegation. Then-Speaker of the House Larry Householder repeated it that week to a crowd of reporters.

Dan Tierney, a DeWine spokesman, said between ODH publishing unprecedented reams of data, the governor’s twice weekly press conferences, and working with media to correct misinformation, the administration is quelling the cacophony of COVID-19 untruths.

“The media plays a large role, the fact that we try and put up so much data on the ODH website, we try to let people do the research, be informed, come to their own conclusions, that does help as well,” he said.

The underfunding of public health and data pitfalls are hardly unique to Ohio.

The COVID Tracking Project, itself a response to what its founders at The Atlantic saw as a shortfall in state-by-state data on the pandemic, gives Ohio a B in its grading system. Fowler found it a bit stingy.

“I personally think it [ODH’s website] has got more information than most,” he said. “We have a lot of information out, more than we’ve ever put out on any disease in the history of ODH.”