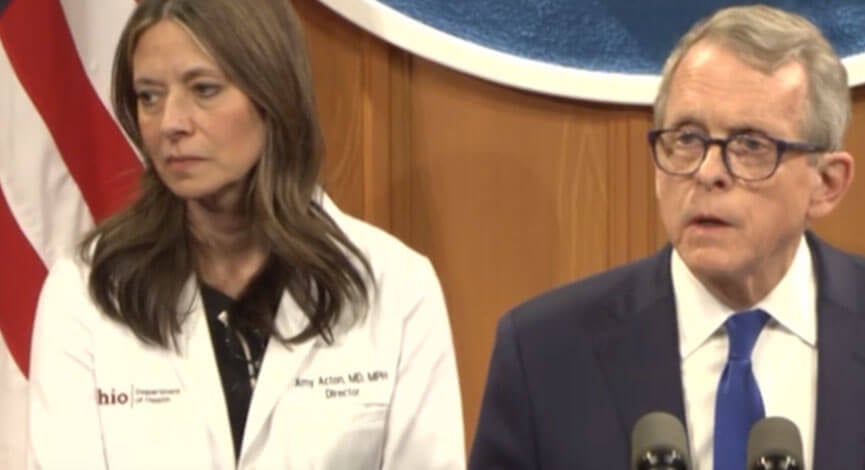 DeWine said that Acton will be returning to the Columbus Foundation, where she worked before becoming the director of the Ohio Department of Health in February 2019.

“It saddens me for her to be leaving our office,” DeWine said. “She has assured me, though, that she’s just a phone call away or a text away and she would be available to continue advising me and our office as we move through this pandemic.”

An update on our friend and advisor, Dr. Amy Acton: She told me yesterday that she has decided to leave state employment and return to @Colsfoundation, where she worked before @OHDeptofHealth.

Dr. Acton previously announced in June that she would step down as director of the Ohio Department of Health, and at that time she accepted a positive to serve as DeWine’s chief health advisor to continue helping the state during the COVID-19 pandemic.

Acton drew both praise and criticism regarding health orders she signed under DeWine’s direction, including orders that postponed the Ohio primary election and closed bars, restaurants, gyms, and other non-essential businesses in the state in an effort to stymie the spread of the novel coronavirus.

Acton will serve as the Director of Kind Columbus, effective Sept. 1, the Columbus Foundation announced in a press release Tuesday.

Acton will be the first director of this special Columbus Foundation initiative, which is “dedicated to spreading the words and actions of kindness as a defining value for our region.”

“I am so fortunate to have been given the opportunity to serve the Governor and the people of Ohio,” Dr. Acton said in the press release from the Columbus Foundation.

“For me, it was a privilege to try to be of help to the awesome team in the Department of Public Health and our extraordinary Governor and Lt. Governor, and to help give people a connection to each other, as we did all we could muster to save their lives and the lives of others. I am pleased to be returning to The Columbus Foundation to lead this investment in kindness as a valuable tool for community healing and progress,” Acton added.