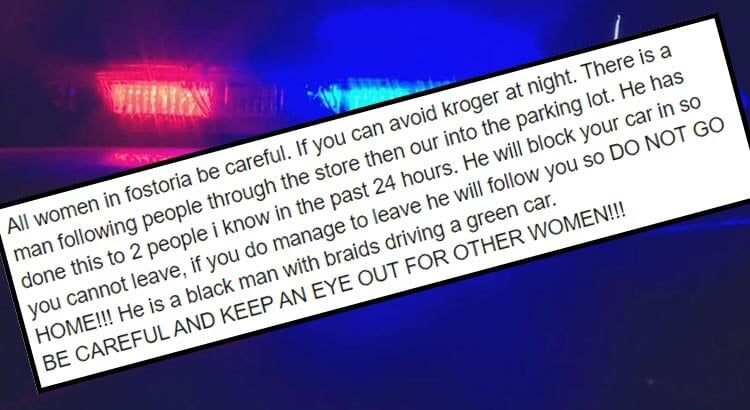 FOSTORIA, Ohio — The Fostoria Police Division has issued a statement regarding a viral Facebook post which claims a man has been following and harassing women at the Kroger store in Fostoria, and at least two people have filed reports with the department regarding the man.

“He will block your car in so you cannot leave, if you do manage to leave he will follow you so DO NOT GO HOME,” the viral post states.

The post claims the man attempts to hit on women, and after being turned down, begins to follow them.

But later on Tuesday, at least two people had filed reports with the Fostoria Police Division regarding a man harassing them at the Kroger store. Those reports are under investigation, according to police.

“PLEASE watch your surroundings. This man FOLLOWED me around Fostoria Kroger today!! He was a tall African American man with dreads. He was wearing a white tshirt with red basketball shorts with a black mask with a blue Nike swish sign on the right side,” another version of the post states.

One of the social media posts regarding the situation, which has been shared by a number of people in the area, states that a woman called her boyfriend to tell him she was being followed by the man, to which the boyfriend said he had heard of a similar incident taking place before.

“[He] immediately asked me if it was a black guy with dreads? I said yeah, how did you know? He said stay put! Don’t leave the store, tell the manager! I was nervous, I alerted the manager and he followed me around the store and watched the man exit the store (he was checking out when I was too) and he was the driver in a white vehicle the passenger was also an African American man with dreads,” the Facebook post states.

The Fostoria Police Division said in their Facebook post that they can only improve the community’s public safety by “working together to keep the criminals held responsible for their actions.”

The reports are currently under investigation by Fostoria police.