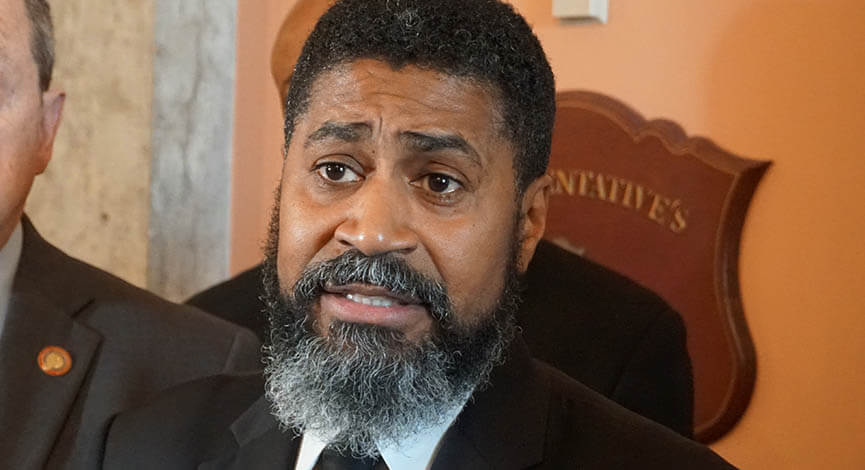 Anybody in the know about Ohio politics has a perspective on what federal law enforcement is calling the biggest bribery scandal in state history.

But nobody could have had the same perspective that Fred Strahorn did when news broke on July 21 that Ohio House Speaker Larry Householder had been arrested on charges that he had corruptly used corporate funds to ram through a $1.3 billion ratepayer bailout of two failing nuclear power plants.

Strahorn, a Democrat from Dayton, stepped down as House minority leader in January 2019 after he failed in his attempt to get most members of his caucus to vote for now-former speaker Ryan Smith, R-Bidwell. In the end, 26 of 38 House Democrats voted for Householder, giving him the winning margin in his 52-50 victory over Smith.

After the election, Strahorn resigned his leadership position and Emilia Sykes of Akron, who had voted for Householder, was elected in his place.

In an interview Friday, Strahorn, a 17-year veteran of the legislature, said his experience told him that Householder should be kept away from the center of power.

“We all know he had a history of having some issues, Strahorn said. “Certainly he was under investigation the last time he was speaker.”

In 2006, the Justice Department told the FBI that it wouldn’t pursue charges against Householder. The FBI had been told two years earlier that Householder had used his post as head of the House Republican Campaign Committee to overpay some vendors in exchange for kickbacks from them.

They’re accused of using the money to elect Republican candidates friendly to Householder and on xenophobic TV and mail ads in support of House Bill 6, the bailout. They’re also charged with using the funds to squash a citizen initiative to repeal HB 6 and to feather their own nests.

Strahorn was leery of Householder, but the criminal complaint shocked him.

The feds haven’t accused any House Democrats of involvement in the scandal but the fact remains: Without their votes, Householder would never have become speaker. On Friday, Strahorn refused to criticize the members of his caucus who put the now-indicted, now-former Republican speaker over the top.

“I want to refrain from taking a shot at my colleagues,” he said.

He did say, however, that in the heat of the January 2019 speaker battle he sensed that the nuclear bailout was central to the fight.

“I was suspicious,” he said. “I didn’t know for sure. I couldn’t prove it, but I’ve been doing this for a long time and something just didn’t seem right.”

Ironically, while some outsiders were hailing Householder’s elevation to speaker as a victory for bipartisanship, Strahorn saw something else.

“That’s one of my biggest sadnesses over this,” he said. “I had a really good relationship, whatever Speaker (Cliff) Rosenberger (who in 2018 resigned amid an FBI probe of his overseas travel) may have done or may not have done. And I had a good working relationship with Ryan Smith. There were issues there, but we could find middle ground. I just think that Larry (Householder) took us in a very different direction.”

Strahorn said he didn’t vote for Bob Cupp, R-Lima, when he became speaker Thursday because Strahorn mistakenly thought Democrats were going to field their own candidate. But he said he supports the new speaker.

“He’s the right person to move us forward,” Strahorn said. “He’s a person of integrity.”

Instead of feeling vindicated by Householder’s arrest, Strahorn said he felt as if a load had been lifted.

“I failed to protect the state from a guy I knew was going to do bad things,” he said.