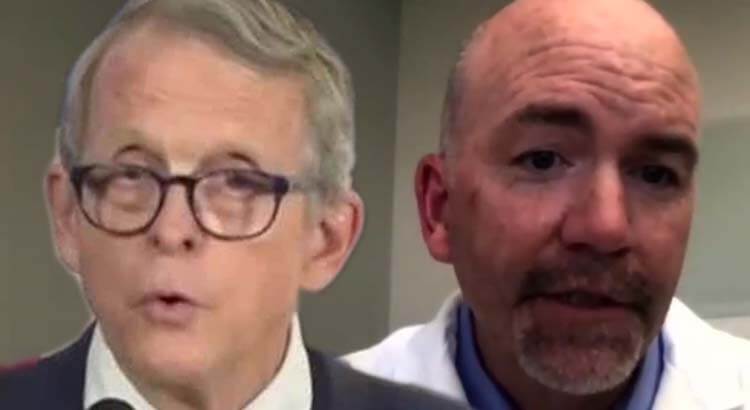 An Ohio doctor is weighing in after Gov. Mike DeWine tested positive for the novel coronavirus (COVID-19) on Thursday, and then hours later tested negative.

DeWine was scheduled to greet President Trump on the tarmac at Burke Lakefront Airport in Cleveland. He was tested as part of a protocol for coming in contact with the president, and that test came back positive, preventing the governor from being able to greet the president.

Before his planned meeting with the president, DeWine was tested using an antigen test arranged by the Republican National Committee, which came back positive.

Later that day he was tested using a PCR test, which looks for specific RNA for the SARS CoV-2 — in other words, the genetic material specific for the virus that causes COVID-19.

Dr. Peter Mohler, chief scientific officer for The Ohio State University Wexner Medical Center and vice dean for research at the OSU College of Medicine, joined the governor during his press briefing Friday afternoon to provide some answers regarding the discrepancy between the two tests.

DeWine said Mohler has been working alongside the governor’s team for the past few months to help with Ohio’s testing strategies.

According to Dr. Mohler, PCR tests are what have been widely used across Ohio throughout the pandemic. Roughly 1.6 million PCR tests have been performed in the state, Mohler said.

“This is an incredibly sensitive and incredibly accurate test. It’s like a big telescope way to look at the virus,” Dr. Mohler said. “We would call the gold standard the PCR test.”

Dr. Mohler said the PCR test is considered to be more accurate than the antigen test, which is a brand new type of test.

“The antigen test doesn’t look at the genetic material, it looks at the protein on the surface of the virus,” Dr. Mohler said. “It’s a little bit less sensitive and so you’re going to have things that we call false negatives and false positives.”

The advantage of the antigen test, however, is that it allows for point of care testing, which means results can come back within 15-20 minutes, Dr. Mohler said during the press briefing.

But the antigen test has a significant downside, as the state of Ohio learned Thursday, in that it’s less sensitive and therefore less accurate than the PCR test.

“For the epidemiologists of the world, you’re very quickly able to do contact tracing, be able to quarantine people and be able to make decisions on healthcare,” Dr. Mohler said.