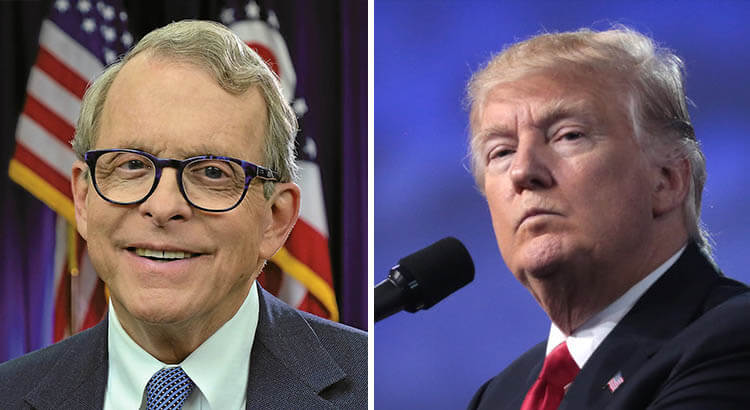 Ohio Gov. Mike DeWine on Thursday said he does not agree with President Donald Trump’s calls for a national boycott against Akron-based tire manufacturer Goodyear.

“Look, we should not boycott this good company. They have Ohio workers who are doing a good job and making a good product,” DeWine said during his Thursday coronavirus briefing. “We should not have any kind of boycott.”

Trump urged Americans to boycott after a Goodyear employee told a TV station in Kansas that employees at the Topeka plant were instructed not to wear attire with any political slogans, including “Make America Great Again” and “Blue Lives Matter.”

“Goodyear became the focus of a conversation that created some misconceptions about our policies and our company,” Goodyear said in a statement shared on Twitter. The company added that its corporate office did not create or release the zero-tolerance slide in question and it was not part of a “diversity training class.”

Goodyear added that they have “zero tolerance for any forms of harassment or discrimination. To enable a work environment free of those, we ask that associates refrain from workplace expressions in support of political campaigning for any candidate or political party, as well as similar forms of advocacy that fall outside the scope of racial justice and equity issues.”

The company said it appreciates the “diverse viewpoints” of all its more than 60,000 employees and has “always wholeheartedly supported both equality and law enforcement.”

“Goodyear employs thousands of American workers, including in Ohio where it is headquartered. To President Trump, those workers and their jobs aren’t a source of pride, just collateral damage in yet another one of his political attacks,” Biden said in a statement.

“President Trump doesn’t have a clue about the dignity and worth that comes with good-paying union jobs at places like Goodyear — jobs that can support a family and sustain a community,” Biden added.

“It’s absolutely despicable that the President would call for a boycott of an American company, based in Akron, that employs thousands of U.S. workers,” Brown tweeted Wednesday.

“Keep in mind, this is a President who spent years making his own Trump-branded products overseas,” Brown added. “He failed to stand up for workers in Lordstown, and now he betrays the workers in Akron.”