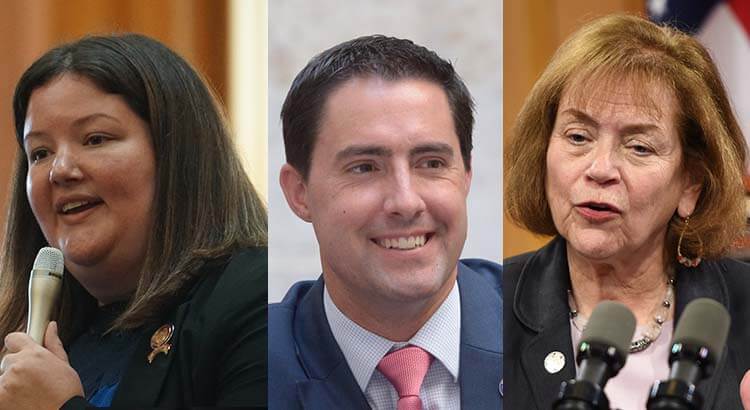 Their House Bill 737 was introduced shortly after the July 21 arrest of Ohio House Speaker Larry Householder, R-Glenford, as part of a federal bribery investigation. Ohio Secretary of State Frank LaRose, whose office oversees campaign finance reporting, has come out in favor of the bill. Fifteen other state legislators of both parties have signed on as cosponsors.

LaRose met with Manning and Miranda on Monday morning to discuss legislative ideas, then the trio outlined proposals to reporters.

Householder and four others were arrested as part of a $61 million racketeering scheme to enact a $1.3 billion nuclear bailout in the form of House Bill 6. The 2019 bill was meant to benefit the former FirstEnergy Solutions of Akron, while also allegedly personally enriching Householder and other political operatives in the process.

The scheme, as alleged by federal investigators, centered on use of “dark money groups” registered as 501(c)(4) organizations. While political candidates are required to disclose their donations and spending through regular campaign finance reports, these nonprofit “social welfare” groups do not have to under federal law.

Investigators say FirstEnergy funneled millions of dollars to the groups, which in turn used the money to support Householder, his allies and the effort to pass HB 6. David M. DeVillers, the U.S. Attorney for the Southern District of Ohio, has said the conspiracy likely could not have happened without perpetrators having taken advantage of campaign finance rules exempting dark money groups from having to disclose their donors.

The new bill proposed by Manning and Miranda would not place any new restrictions on political spending for elections or other policy issues. It would, however, require all spending going forward to be publicly disclosed.

Using HB 6 as an example, FirstEnergy would still have been allowed to spend millions to influence the outcome of the bill. However, this spending would have been made public at the time, a fact that may have impacted its support among lawmakers in the Ohio Statehouse as well as their constituents.

“If you’re going to spend your money, you should own it,” LaRose said.

Besides the transparency component, the bill’s proponents want to reform Ohio’s campaign laws in a few other ways.

One aspect involves “petition blockers.” As part of the Householder scheme, his alleged criminal enterprise worked to scuttle a referendum effort to get HB 6 overturned. Such people working to impede a petition drive should have to register themselves and identify who is paying them, LaRose and the HB 737 sponsors say.

The bill would also provide new subpoena powers to the Ohio Secretary of State’s Office in investigating campaign finance issues.

Supporters of this legislation say they hope the pressure stemming from the fallout of Householder’s arrest will lead Ohio lawmakers to getting these reforms passed.

“This is the time,” Miranda said.