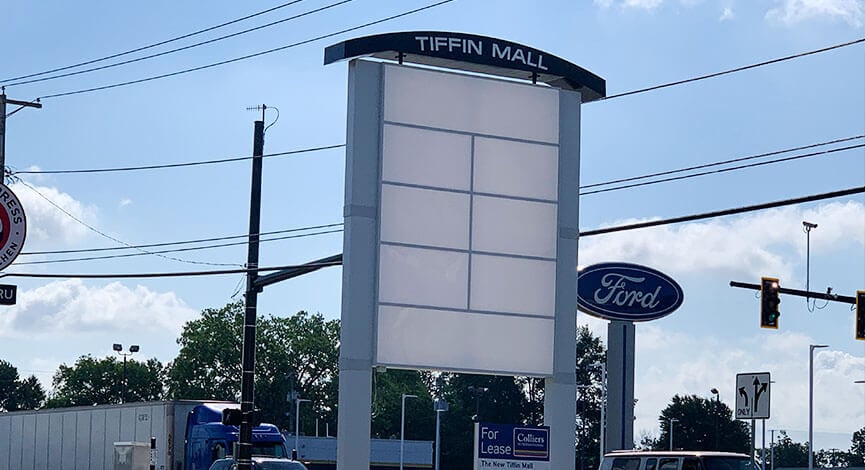 A brand new sign has been installed outside of the Tiffin Mall property, with an empty array of slots used to indicate tenants.

This begs the question… What for?

The mall, owned by Toledo-based Key Hotel & Property Management, has been mostly empty over the past few years.

Since the closure of Label Shopper, which was located where Planet Fitness resides now, there are no retail offerings in the mall. A few restaurants, including Xcaret Mexican Restaurant and Kiku Japanese Fusion, as well as a dry cleaning business, are current tenants of the main mall property.

Cinemark Theater and Asian Grill Buffet reside in the mall annex — but beyond that, it is virtually empty.

People looking to get some exercise used the air conditioned mall in the past to get their steps in — but even that isn’t an option anymore, as much of the empty indoor mall area is blocked off by fences.

Some have wondered if there are plans to demolish the property and develop a strip mall in its place. Strip malls, such as the property that houses Chipotle Mexican Grill and Boost Mobile in Tiffin with separate units for each tenant, are considered to be more cost effective than indoor malls — particularly due to heating and cooling costs.

Steve Roumaya, CEO of Key Hotel & Property Management, previously said the retail market has been “hot” in Tiffin, and that they are seeing “significant demand for additional shopping options.”

“We look forward to working with all existing mall tenants as well as other area businesses to help them succeed, and we appreciate all the support we are receiving from the City of Tiffin,” Roumaya said.

“They’re dying virtually everywhere,” Montz tweeted. “Construction of new malls has nearly ceased entirely in the United States due to decrease in popularity and online shopping.”

The Tiffin Mall was purchased in 2016 by Key Hotel & Property Management. That group purchased the property for $2.2 million from Tiffin Mall Realty, which was owned by the Kohan Retail Investment Group out of New York.

Another sign directly below the new one states that the “new Tiffin Mall” is available for lease. What’s new about the property remains a mystery, as it hasn’t changed much since it opened in the 1980s. The same benches, fake plants, and wall coverings still reside in the mall today.

Key Hotel & Property Management couldn’t be reached for comment Monday, but this story will be updated with new information as it is received.

It will be interesting to see what, if anything, follows the installation of this new sign. Stay tuned.