The criminal complaint against Ohio House Speaker Larry Householder and four political operatives lays out alleged bribes made to signature collectors for a voter referendum on a nuclear bailout, along with a comprehensive campaign to hire signature collection companies, just so those companies couldn’t work against the bailout effort, House Bill 6.

As part of the 80-page criminal complaint, the four operatives are all named in an alleged plot to keep collectors from getting those signatures, and bribing individuals to provide “inside information” about where the campaign stood. 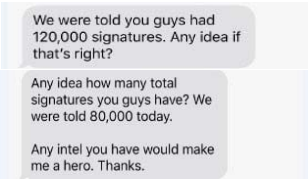 “Thereafter, (the employee) recorded his conversations with Borges, including Borges’ payment of $15,000 to him,” the complaint stated.

Two days after the Ohio Attorney General had approved ballot language for HB 6, Borges allegedly reached out to the employee.

The employee texted Borges after a meeting to say he would not accept the alleged bribe.

“At the beginning of this I thought I could walk my information into Larry’s office and sell it for enough to retire on,” the employee texted Borges, according to court documents.

Borges responded to the employee, saying “No matter what – don’t ever tell anyone about our conversation from earlier.”

The employee would later reconnect with Borges “at the direction of the FBI,” and Borges would offer a “substantial ‘buy out’ for sensitive information…about the Ballot Campaign.”

The investigation also alleges that Borges “stated that he and his firm were working for Company A on the ballot project and that Householder, Company A, and Borges’ firm formed an ‘unholy alliance.’”

Other bribes are alleged to have occurred between the men charged in the case and signature collectors. The criminal complaint specifies alleged bribes of $2,500 and plane fare “to stop collecting signatures and provide inside information relating to the Ballot Campaign’s HB 6 referendum efforts.”

The investigation said Householder was present at a recorded dinner party with Clark, in which they discussed a discrepancy between the numbers of signatures they showed and the numbers signature gatherers had reported.

Householder was recorded again, according to investigators, discussing the ballot campaign signatures during a dinner with Clark. Clark was recorded as saying “we have to go out on the corners and buy out their people every day.” He also mentioned a strategy to “knock off” signature collectors.

“It was at this point in the conversation, when Householder interrupted…and said, ‘It is so important, it is so important, that they are not successful, because when the legislature votes on something it needs to stay law,’” according to transcripts of the recording stated in the criminal complaint.

Following that discussion, signature collectors began receiving unsolicited text messages from a contractor with a signature service with whom Clark had contacts. The company had also been paid more than $600,000 with money connected to Generation Now, according to investigators. 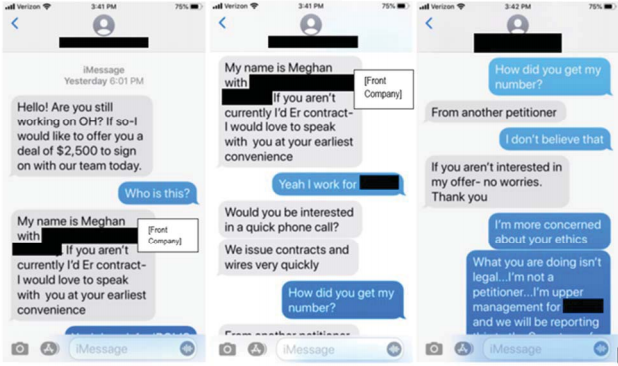 One signature collector said she received an offer of $2,500 and a plane ticket home after receiving unsolicited texts, according to the complaint.

In affidavits provided by signature collectors, a contract described the services needed for payment. Those included providing “statewide ballot issue advice and expert consultation on Ohio statewide ballot measures and the associated petition circulation and signature collection matters related to the referendum of HB 6 related issues, which occurs within a 90-day period upon enactment HB 6.”

The contract, according to investigators, was signed by Longstreth, with notices sent to Generation Now.

The criminal complaint specifically names Clark, accusing him of advising clients “that if they would retain as many of the signature collection firms as possible, then those firms could not work for their opposition,” effectively reducing the ability for the referendum group to collect signatures.

In a recorded meeting in July 2019, Clark said he had wired $450,000 “hiring signature collections people to not work.” He later confirmed that the money had come from Householder’s Generation Now.

A spreadsheet recovered from Cespedes lists the firms hired, and investigators state in the criminal complaint that the document was created two days after Clark was recorded.

In that phone call, Clark said “they are all full of shit. I have been a lobbyist for 39 years, been around a long time. It always goes circular to someone going well, we’ll give you a kickback.”

“The records further show that some of these firms, along with other petition firms, received additional payments in the fall of 2019,” the complaint stated.

Investigators also connected transfers of Generation Now money to signature firms with text messages between those accused in the case, specifically Clark, Cespedes and Longstreth. Cespedes even offered to “up the budget” to hire more firms.

“I am pleased that House Bill 6 will go into effect at midnight tonight and am confident it will produce positive results for Ohio,” Householder was quoted as saying in the press release.