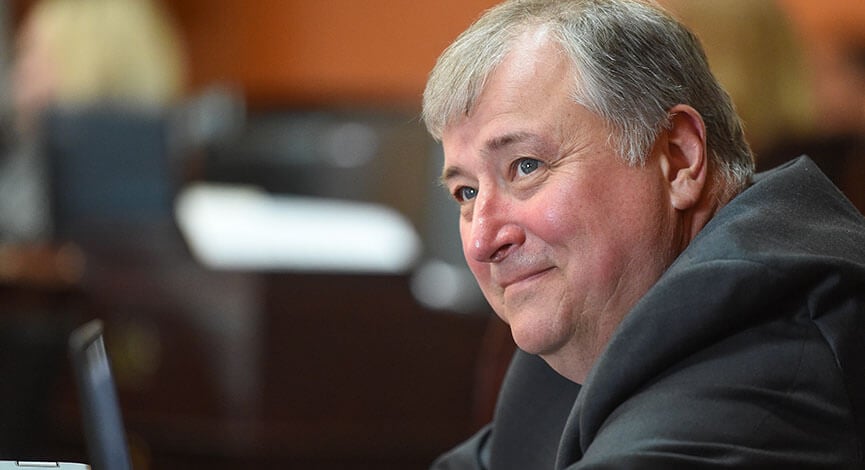 Larry Householder during session in the Ohio House chamber. (via Ohiohouse.gov)
ShareTweet

Ohio House Speaker Larry Householder, four political operatives and a dark-money group were charged Tuesday in a criminal complaint that an Ohio energy company paid them $61 million to get a $1.5 billion nuclear bailout from taxpayers.

All are charged with racketeering, which carries a prison sentence of up to 20 years.

The alleged conspiracy, which revolved around the bailout of two failing nuclear plants in Northern Ohio, is “likely the largest bribery and money-laundering scheme ever in the state of Ohio,” David M. DeVillers, U.S. Attorney for the Southern District of Ohio, said at a Tuesday afternoon press conference.

Shortly after the press conference, Ohio Gov. Mike DeWine called on his fellow Republican to step down.

“I am deeply concerned about the allegations of wrongdoing in the criminal complaint issued today by the U.S. Attorney’s Office,” DeWine, who last year signed the bailout into law, said in a written statement. “Every American has the presumption of innocence until proven guilty.  Because of the nature of these charges, it will be impossible for Speaker Householder to effectively lead the Ohio House of Representatives; therefore, I am calling on Speaker Householder to resign immediately. This is a sad day for Ohio.”

The criminal complaint says that “Company A,” the former FirstEnergy Solutions of Akron, worked to save its failing nuclear plants by funneling $61 million into Generation Now, a 501(c)(4) “dark money” group controlled by Householder.

The money was used for three general purposes, the complaint said. First it was used to build “Team Householder” through campaign contributions and other measures that helped Householder win the speakership in 2019.

“In exchange for payment from Company A, Householder’s enterprise helped pass House Bill 6, legislation described by an enterprise member as a billion-dollar ‘bailout’ that saved from closure two failing nuclear power plants in Ohio affiliated with company A,” the complaint said

The money was also used for the personal benefit of Householder and the other conspirators, DeVillers said. Householder got about $500,000, he said.

And the money was used to fend off a petition effort to repeal HB6, going so far as to buy plane tickets for and pay $1,000 each to people circulating it to get out of town, DeVillers said.

The federal prosecutor said that it was crucial to keep the investigation secret until Tuesday. Now it begins a new phase that might be causing some lawmakers, energy executives and some others to lose sleep.

“As of this morning there are a lot of FBI agents knocking on a lot of doors asking a lot of questions, serving lots of subpoenas. That’s going to go on for days.”

House Bill 6 is adding $1.5 billion in additional taxpayer bailouts to the $10.2 billion that Akron-based FirstEnergy Solutions and its former parent company, FirstEnergy Corp, have received from taxpayers since 1999. Most of the funds have gone to prop up the Davis-Besse and Perry nuclear power plants in Northern Ohio.

The company that owns the plants was renamed Energy Harbor after emerging from bankruptcy earlier this year.

Despite the companies claims of poverty, the interests behind the bailout spent millions — much of it in the form of hard-to-trace dark money on campaign contributions, a xenophobic ad campaign and then on an aggressive effort to stymie a petition drive to repeal the bailout DeWine signed into law a year ago.

The interests behind the nuclear bailout also contributed heavily to the effort at the beginning of 2019 to elect Householder speaker. He ended up winning the support of 26 Republicans and 26 Democrats, His opponent, Ryan Smith, R-Bidwell, got the votes of 34 Republicans and 12 Democrats.

The Ohio Democratic Party didn’t respond when asked about the fact that Householder wouldn’t have worn the speakership without Democratic votes. However, the party chairman, David Pepper called on Householder to step down as speaker.

“As the U.S. attorney indicated, this investigation is ongoing, and we will wait to hear all the facts as they emerge. However, given what was revealed in today’s complaint and the taint of corruption over Ohio legislative activity, we believe Speaker Householder should step down from leadership immediately as he avails himself of his due process rights,” Pepper said in a written statement.

In 2006, the Justice Department told the FBI that it wouldn’t pursue charges against Householder. The FBI had been told two years earlier that Householder had used his post as head of the House Republican Campaign Committee to overpay some vendors in exchange for kickbacks from them.

Nor is Householder, 61, of Glenford, the first Ohio House speaker to find himself in the FBI’s crosshairs. In 2018, Speaker Cliff Rosenberger, a Republican, resigned amid an FBI probe of his overseas travel. He has not been charged, but the investigation remains open.

Read the criminal complaint below: