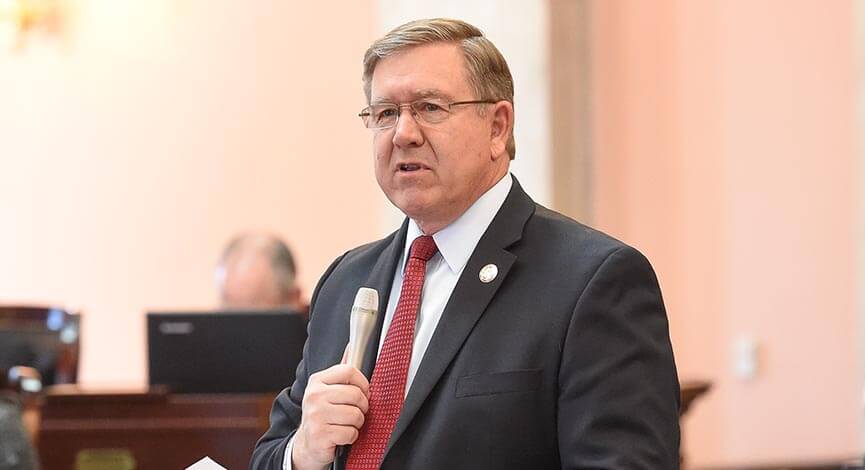 The Ohio House of Representatives voted Thursday to remove Speaker Larry Householder as the chamber’s leader, then hours later elevated state Rep. Bob Cupp (R-Lima) to serve as the next Speaker of the House.

Cupp, 69, a former Ohio Supreme Court justice, was chosen to guide the legislative chamber following the arrest of Householder as part of a federal bribery investigation. Cupp’s supporters touted the Lima native’s experience and integrity as being well suited to serve as House Speaker.

The vote to remove Householder was unanimous. The subsequent vote to elect Cupp fell largely along party lines, with three Republicans joining the Democratic caucus in voting against.

“It is a great privilege to lead this chamber,” Cupp said after taking the oath of office. “I’m sorry it is in such difficult and trying and unprecedented times as this, however. But I pledge to do so honorably and fairly and humbly. It is imperative to repair the public’s trust in our public officials.”

Householder, four political operatives and a dark-money group were charged last week by prosecutors in a criminal complaint that an Ohio energy company paid them $61 million to get a $1.3 billion nuclear bailout from ratepayers in the form of House Bill 6.

Shortly before the vote to remove Householder as speaker on Thursday, an official federal grand jury indictment was filed against Householder.

Though Householder was removed from his leadership position, he retains his seat in the body. (He was not present on the floor for either vote Thursday.) Officials from both parties have called for Householder to resign.

A motion had been made during the afternoon session Thursday to expel Householder from the chamber, but it was tabled with the support of most House Republicans.

Speaking to reporters after Thursday’s floor session adjourned, Cupp indicated the members would not seek to remove Householder from office. Householder is unopposed for re-election this November; Cupp noted if Householder is removed now he may return again next year.

Charged along with Householder were Matt Borges, a lobbyist who was formerly chairman of the Ohio Republican Party, Neil Clark, a lobbyist who owns Grant Street Consulting, Juan Cespedes, also a lobbyist, and Householder’s close adviser, Jeffrey Longstreth. The investigation centered on their efforts to get HB 6 passed into law.

All are charged with racketeering, which carries a prison sentence of up to 20 years.

The criminal complaint says that “Company A,” the former FirstEnergy Solutions of Akron, worked to save its failing nuclear plants by funneling $61 million into Generation Now, a 501(c)(4) “dark money” group controlled by Householder.

The money was used for three general purposes, the complaint said. First it was used to build “Team Householder” through campaign contributions and other measures that helped Householder win the speakership in 2019. The money was also allegedly used for the personal benefit of Householder and the other conspirators. Finally, the money was allegedly used to fend off a petition effort to repeal HB 6, going so far as to buy plane tickets for and pay $2,500 each to people circulating it to get out of town.

Cupp voted for HB 6. He has also received nearly $25,000 in campaign donations from FirstEnergy’s political action committee dating back to his earlier stint in the Ohio General Assembly in the 1990s.

Still, his election as speaker was perhaps viewed as a change in direction compared to his opposition for the role, Rep. Butler, a Householder ally.

I congratulate Bob Cupp upon his election as the new Speaker of the Ohio House of Representatives. Speaker Cupp is a man of integrity who will serve Ohio well. I look forward to working with Speaker Cupp and Senate President Obhof in the days ahead.

The House Democrats are far more skeptical. Having helped to elevate Householder to the speakership last year, Democrats this time uniformly voted against Cupp.

A one-sentence statement from House Minority Leader Emilia Strong Sykes was brief and to the point.