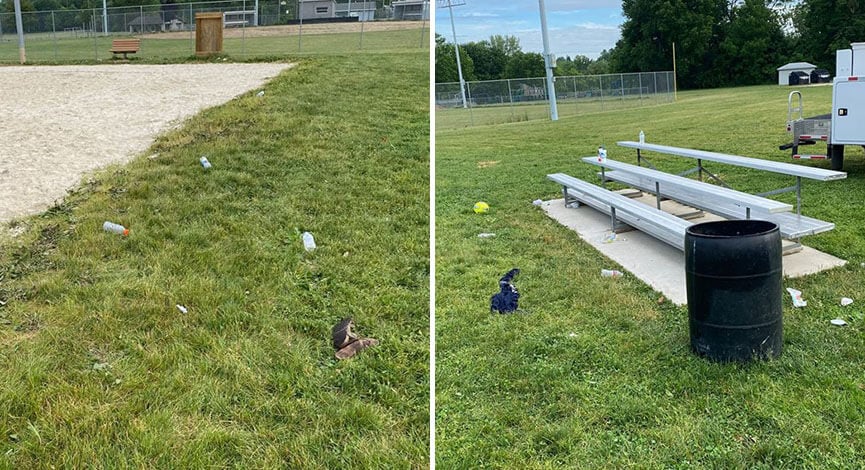 “We are continuing to have a ton of trash issues at Hedges-Boyer Park. The park staff is becoming very frustrated with it,” Montz said.

“It’s not a trash problem that people could not find a trash can, they’re just throwing it down like along the walking trail like you’d expect. We’re actually seeing the issue occur at the basketball courts and volleyball courts, where people are leaving bottled water, Gatorade, cans of pop, etc. literally within feet of the trash cans. Just letting them sit on the bleachers, throwing them on the ground.”

Montz said park staff have been going out and finding trash cans half-filled, so it’s not as if people couldn’t fit the trash into them instead of littering.

“People are just not willing to walk it another few feet and throw it away. So because of that, they have erected permanent signage out at the park asking people to please throw their items away,” Montz said. “I know they got the volleyball courts back up, that was one thing that they had done. They first put up some warning signs and unfortunately people were still trashing the volleyball courts, so the nets were taken down for a week. And the same thing has now happened with the basketball courts and the tennis courts, so they were taken down for a week as well.”

Montz asked park-goers to stop littering and take the simple step of throwing your items away properly.

“This can’t continue. We need to do a better job of keeping our parks clean, and there is absolutely no excuse, when there are multiple trash cans right next to these courts, for the parks department first thing after a weekend, or even during a weeknight… And the courts were just riddled with bottles and trash. There’s really no excuse, trash cans are right there in the area,” Montz said.

“We’re asking the public to please do a better job of picking up after yourselves. We need to have pride in our community, and taking care of our parks will go a long way towards doing that.”