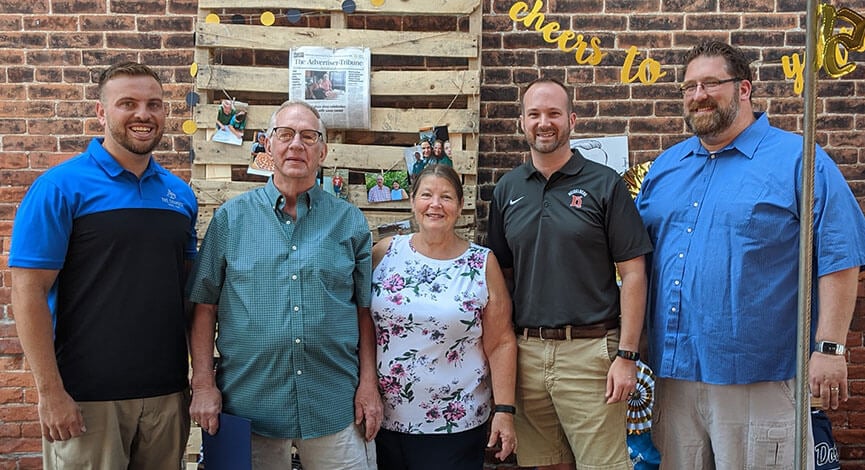 53 years ago, Bloomville native Richard Valentine, a mechanic for a Ford Dealership, took a part-time job at the original Jac and Do’s on Trenton Avenue in Findlay.

What started as a part-time job to bring home extra income to support his four children in the midst of a divorce has blossomed into a half century serving as a cornerstone of our community.

After two and a half years on Trenton Avenue, having worked his way to manage and operate the pizza shop, Richard hoped to strike out on his own. A conversation with the owner of the Findlay Jac and Do’s led Richard to Tiffin, and the pizza shop at 283 South Washington Street.

After building a house in Tiffin, and working at a breakneck pace at both his job at the Ford dealership along with countless hours at the pizza shop, Richard signed the deed for ownership of Jac and Do’s on July 4th, 1970.

For 43 of the past 50 years Richard has been joined by his wife Jan, a Wapokoneta native who he met while she was attending Tiffin University. Jac and Do’s is a true family affair, with the Valentine children Dick Jr., Tim, Berlin, Kim, Adrienne and Amanda all spending time in the shop.

“Amazingly, Jac and Do’s has had four generations of family work in the business,” Mayor Montz wrote in a post to Facebook.

From the single picnic table and pizza oven in 1970, Jac and Do’s has added four concession trucks that make appearances all over the state at county fairs and festivals, while son Tim owns Jac and Do’s in Indian Lake, Urbana and Kenton.

Jac and Do’s has also accumulated a large extended family in the 50 years of continuous operation with untold hundreds of past and present employees learning valuable insight into quality, customer service and being a part of the fabric of Tiffin.

“In an industry where 60% of new restaurants fail within the first year and 80% do not survive until their 5th anniversary, we pay tribute today to Richard, Jan and the entire Valentine family for 50 years of Jac and Do’s serving as a gathering place, a popular lunch spot for high school students and a delicious Friday and Saturday night staple for family dinners for so many in Tiffin and Seneca County,” Mayor Montz wrote.