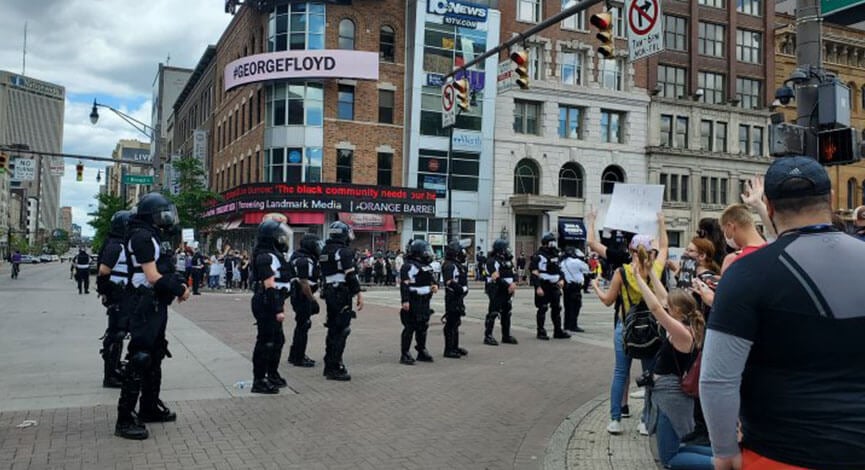 Lawyers across the state say local and national law enforcement have been using police intimidation tactics against Black Lives Matter protesters and organizers.

The Ohio Chapter of the National Lawyers Guild said on Monday that police surveilled and visited at least a dozen people, seizing trash, probing for personal testimony, and asking for photos and videos from recent months’ protests.

“Police have targeted experienced organizers and newer activists, protesters, medics, bail fund members, and others,” a statement posted to the Ohio Chapter of National Lawyers Guild’s Facebook page read. “We know from history that these are intimidation and repression tactics that are unhealthy for democracy, and we want our movements to be aware and prepared.”

Sarah Gelsomino, a Cleveland-area civil rights attorney and NLG member, said she has been contacted by people throughout the state who were approached by local law enforcement, FBI or Bureau of Alcohol, Tobacco, Firearms and Explosives (ATF) agents.

“The feds can investigate in any way they want, including knocking on peoples’ doors,” she said. “The problem is the legal line between a legitimate investigation and harassment is a thin one. It very quickly turns the corner to a scare tactic.”

Gelsomino also said law enforcement have reportedly confiscated protesters’ phones and turned them over to federal agents, followed people while driving, questioned neighbors and family members of protesters, and — within the last week — showed up unannounced at an activist’s home at midnight.

“This is a textbook, very repressive tool that law enforcement uses that has a very chilling effect,” Gelsomino said. “That’s our concern — that not only is (this behavior) dangerous for people potentially being investigated for criminal activity, but they’re also chilling people’s First Amendment right to protest and to speak.”

The FBI’s Cleveland field office did not respond to a request for comment.

Cities that experienced large demonstrations following the death of George Floyd at the hands of four Minneapolis police officers have reported an uptick in investigations by federal agencies.

Similarly, following the death of Freddie Grey while in the custody of Baltimore police and subsequent demonstrations in 2015, a private software company used social media to map protest activity and, in some cases, allow police to arrest protesters.

On June 26, President Donald Trump tweeted photos of 15 unidentified suspects wanted for attempting to topple a statue of President Andrew Jackson in Washington, D.C. In the days’ recent posts, people have advised not to post identifiable photos of protesters on social media.

“I know that the federal government and the FBI in particular has been watching (social media) and is actively seeking more information based on what they’ve seen on the internet,” Gelsomino said. “What we put in the public domain is watched closely by the feds.”

The NLG advises people to exercise their Fifth Amendment rights and not speak to local law enforcement or federal authorities without a lawyer present.

“We encourage folks in the movement to not talk to police or agents in order to protect not only themselves but the broader movement and other people in it,” the NLG’s statement read.