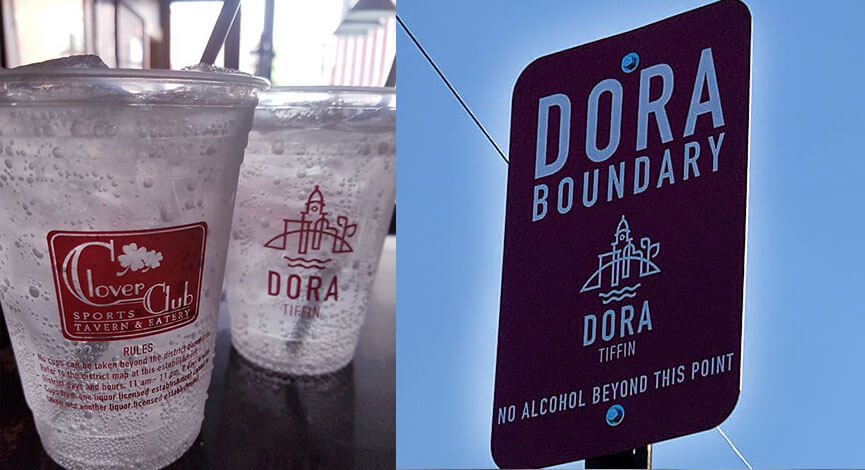 Restaurants and bars in Downtown Tiffin have begun serving up drinks to be consumed outdoors as part of the City of Tiffin’s new Designated Outdoor Refreshment Area (DORA) program.

“It’s finally here, folks. We can now give out DORA cups to go. Any liquor, cocktail, beer, or wine you’d like. No food purchase needed. The cups are only 50 cents a piece. Stop in and grab one today,” The Renaissance of Tiffin wrote in a post to its Facebook page Tuesday afternoon.

“DORA is underway! Visit us to get your cup!” the Clover Club wrote on their page.

Bob Stine, owner of GW’s Fine Food and Spirits, told TiffinOhio.net that they are also now offering drinks to-go as part of the DORA program.

From 11 a.m. to 11 p.m. every day, the DORA allows patrons of liquor-permitted establishments within the DORA boundaries to possess a specifically marked open container within the designated area.

Last month, Tiffin City Council passed an ordinance establishing the DORA. The program officially went into effect on July 1, but many businesses are just now receiving their special permits to allow them to serve the drinks in specially-marked DORA cups.

Tiffin joins 27 other communities in the state of Ohio that have implemented a DORA.

DORA beverages must be purchased from a participating liquor licensed establishment within the designated district; maps have been distributed to participating vendors to be posted at their exits, and signage has been posted at the boundaries of the DORA area.

Businesses owners may post signage to exclude their property from DORA participation.

The only open container allowed will be the designated, specially marked DORA cup purchased from a participating establishment, and a DORA cup cannot be brought into another liquor licensed establishment.

The Tiffin City Council reserves the right to suspend the DORA at any time, for any reason, and the ordinance will sunset on Dec. 31, 2020. Prior to that, council may vote to make it permanent in the City of Tiffin.

The concept was initially presented to council by a recommendation from the Downtown Development Committee of the Tiffin-Seneca Economic Partnership in October 2018 as a way ease or make more accessible outdoor dining and allow patrons to enjoy a beverage within the district’s boundaries.

The proposal submitted to council laid out the hours of operation, boundaries, and establishments to be included in the district, as well as safety and sanitation plans, which were the result of a full year of due diligence and research into communities of a similar size with DORAs in place.

“During the current situation, our restaurants and bars have limited indoor seating and this allows them to expand outdoors. We want to support our small businesses that are struggling as a result of the pandemic. Prior to the DORA, restaurants with a liquor permit that would like to have outdoor seating, were required by law to fence or rope off an area adjacent to their building. We do not have wide enough sidewalks to accommodate those barriers,” Amy Reinhart said.

“The business and property owners have been investing a lot of money and time into making downtown Tiffin a destination. Now, the owners of our restaurants and bars are willing to put forth the additional cost to purchase outdoor seating which creates a welcoming atmosphere within the downtown,” Reinhart added.

Any other businesses beginning to offer DORA drinks can contact TiffinOhio.net by clicking here to be included in this article as well as future stories.