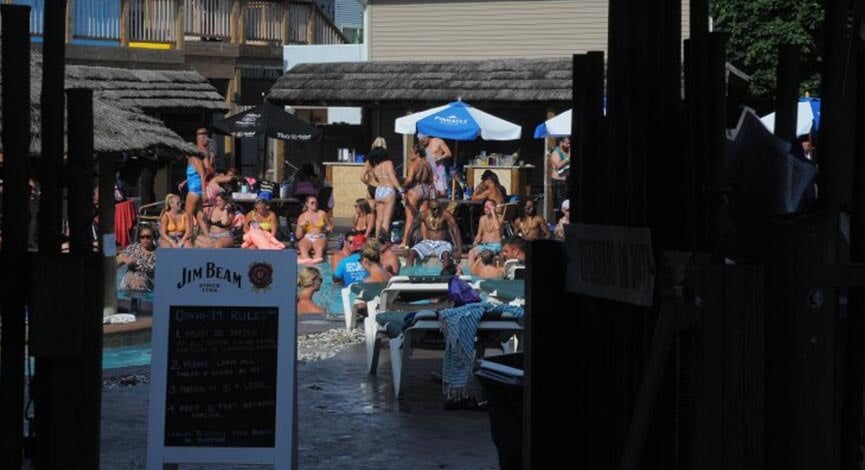 A pool bar at Put-In-Bay. Photo by Jake Zuckerman.
ShareTweet

PUT-IN-BAY — The drinks are flowing. The music is bumping. On Saturday, a line formed to enter one of four pools at The Islander Inn, including what’s advertised as the world’s longest swim-up bar.

Of course, a pandemic rages on all the while.

Recent mass testing detected 66 cases of COVID-19 among workers on the island — a tourist magnet with a boozy reputation, accessible by a short ferry from the mainland.

That figure only counts cases among residents and workers, not tourists who either brought the new coronavirus with them or took it home as a souvenir.

On July 3, the Ohio Investigative Unit charged Niese Holdings Ltd., the liquor permit holder for the swim-up bar, with improper conduct and obstructing an inspection. A hearing is scheduled before a three-judge panel in August.

The Ohio Department of Health’s requires bars to ensure parties stay six feet apart to slow the virus’ spread, or use barriers or other protective devices between groups.

The Islander is one of six bars in Put-In-Bay that have been cited for COVID-19-related violations by the OIU since June 1. Its operators did not respond to a phone call or email. 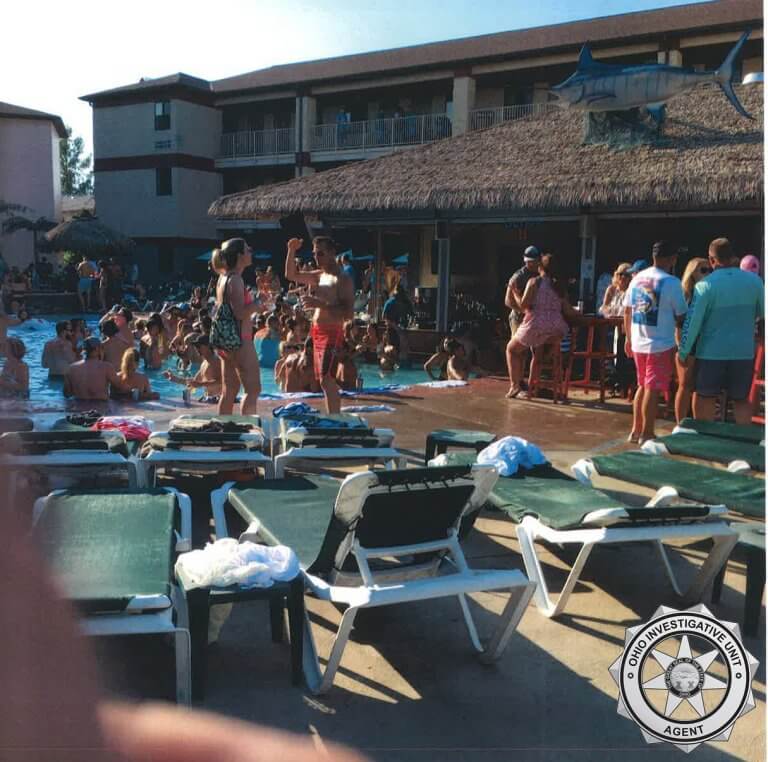 The Ohio Investigative Unit charges the liquor permit holder of the Blue Marlin with improper conduct/disorderly activities. Photo from OIU.

It’s unclear what effect the enforcement is yielding. On Saturday, Put-In-Bay’s bars filled up as usual. Sunburnt tourists sipped drinks in the pool. Friends crowded around tables on the island’s main drag to listen to Johnny Cash covers.

Masks are required statewide in Ohio, though not when “actively consuming food or beverage in a restaurant or bar.” Details are scant. Must masks be worn between sips? Between courses?

Gov. Mike DeWine said Thursday that bars are increasingly becoming a hub of transmission of the new coronavirus. He cited an outbreak of 53 cases tracing back to a “name-that-tune” event at a Henry County winery.

There’s evidence to support the bar theory. As of Monday, more than 7,000 Ohioans between 20 and 29 years old have contracted the disease in July alone, far beyond any other age group.

“We’re starting to see a different age group that is now testing positive,” said Ottawa County Health Commissioner Jerry Bingham. “This age group falls into the demographic with the kinds of crowds we see at Put-In-Bay.”

Many of the businesses on Put-In-Bay house their own employees, raising Bingham’s concerns of the virus rocketing through the bartending community.

He organized the mid-July mass testing event, which ended with a 7% positivity rate, above the statewide average of 6.2%.

However, there’s a blind spot in testing a tourist destination.

The visitors may be coming to the island, catching a disease, but only being counted by their county of residence. Health departments communicate, and sometimes Bingham hears about Ohioans elsewhere who were likely infected at Put-In-Bay, but it takes time, and a little luck.

“I just think that there’s so much case investigation and contact tracing going on throughout the state of Ohio that it sometimes takes time [to find] a commonality through other cases in the state,” he said.

In both Ohio, Kentucky and West Virginia, COVID-19 cases have traced back to travel to Myrtle Beach, a South Carolina locale similar to Put-In-Bay.

Bingham said while the public health community may not be winning the battle against bars, “the tide has shifted” when it comes to masks and social distancing.

Of the more than 14,000 bars OIU has inspected since the pandemic began, just 90 have been cited, according to Michelle Thourot, agent in charge of the unit.

“What’s happening is, there’s hundreds of people in these locations,” she said of locations that were cited. “They’re shoulder-to-shoulder, there’s no masks, there’s no attempt at social distancing … They’re running their bars just like they were in January or February.”

More than strict compliance, she said OIU is looking for a good faith effort and to work with bars to keep employees and patrons safe. She knows following COVID-19 guidelines is costly to businesses and a headache for managers.

For some establishments, it’s just going to mean running a business differently. But it can be done, whether it means putting down tables on a dance floor or nagging enforcement of social distancing in the pool.

“I’m not going to make it sound like this is easy, but it’s important,” she said.

Peter Huston, executive director of the bay’s Chamber of Commerce, offered a rosier outlook on the bar scene.

“Pool bars often attract younger more gregarious visitors,” he said. “People visiting the island need to make their own decisions on where to go and their comfort level around those younger tourists. The ferries, stores, restaurants and bars are all doing amazing jobs here. They are all motivated to ensure the visitors feel safe.”

There’s talk of shuttering bars. In Columbus, the city council voted Monday night to close bars at 10 p.m. Mayor Andrew Ginther said the thinking behind the idea is that social distancing tends to deteriorate by the hour, so best to cut it off early.

Franklin County Common Pleas Judge Mark Serrott halted the ordinance for two weeks in response to a lawsuit from a group of bars and restaurants, according to The Columbus Dispatch.

Ohio’s bars re-opened for outdoor dining May 15 and indoor service May 21. Almost immediately, the Standard Hall in Columbus attracted national attention when photographs of its crowded patio emerged.

Starting in mid-June, average new caseloads leapt upward from about 380 cases per day to about 1,300 per day a month later.

However, closing bars could devastate business owners and employees at Put-In-Bay or anywhere they take effect — even more than the pandemic already has. 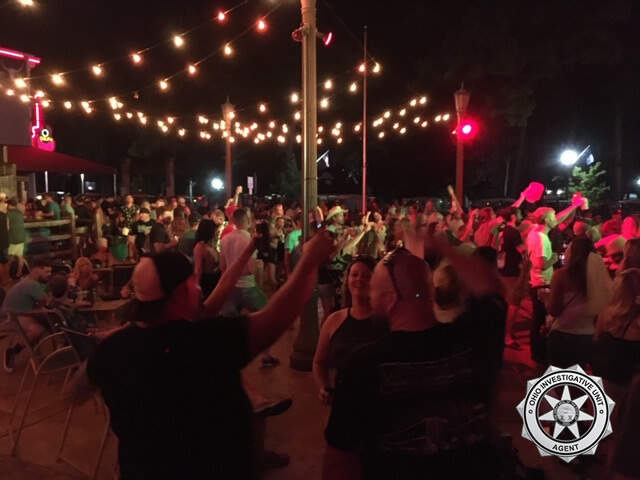 Bill Market, co-owner of Miller Ferry, one of the main transportation lines to the island, said ferry traffic is less than half of what it has been the past few summers.

The ferry business may be hurting, but it beats hospitality.

Before The Outliers played a Saturday night set at T&J’s Smokehouse, frontman Will Jackson said he and his band’s livelihood depends on what remains of the bar and restaurant industry.

“The whole entertainment industry, which to me includes everybody from musicians, to bartenders, to wait staff, our whole job revolves around making sure people have fun while on vacation,” he said. “And vacation has pretty much been eradicated by covid.”

OIU cited the bar over the weekend, alleging a majority of patrons inside were not wearing masks, that the outside patio was “packed” with patrons, people were shoulder to shoulder on the dance floor, and even bar security failed to wear masks.

Put-In-Bay Mayor Jessica Dress did not respond to emails.

Kayla Johnson, a manager at The Fishbowl, which has not been cited by the OIU, said she’s had to cut back hours at the bar, and short staffing ended breakfast for the season. It’s been a slow couple of weeks. But she tells employees all the time, if we want to keep making money, then mask up.

“It’s doable, you just follow the guidelines,” she said. “They’re always changing, but you gotta keep up with the times. Now’s a time where everything’s moving along, you’ve got to move with it.”