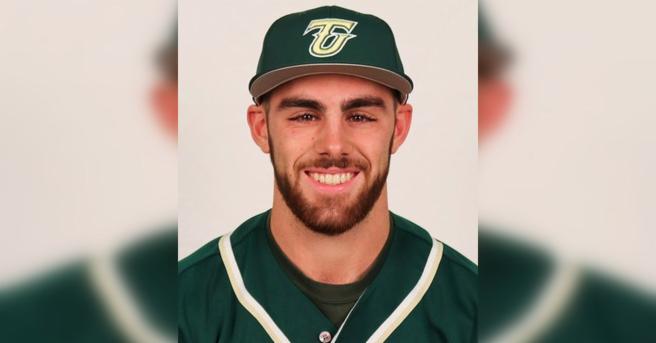 A couple of days after the conclusion of the 2020 Major League Baseball Draft, Tiffin baseball standout Cody Orr has agreed to terms with the Houston Astros to sign as a free agent.

The junior is one of just three players in Dragon baseball history to sign with an MLB team, joining Logan Sendelbach (Pittsburgh, 2015) and Nick Rodesky (Philadephia, 2014). He would have had a very high chance to join Sendelbach (10th round) as the second TU player to be selected during the 40 rounds of a typical draft, but the 2020 version was shortened to just five rounds due to current circumstances.

Orr may go down as one of the best two-way players in Tiffin baseball history, truly blossoming into a star in 2019 as a sophomore. Offensively, Orr was third on the team with a .349 average, first with 55 runs scored, third with 66 hits, first with five triples, sixth with 29 RBI, fourth with 25 walks, and second with eight stolen bases. His 55 runs scored were the third-most in Dragon season history, including five in Tiffin’s first NCAA Tournament game and win over Ashland on 5/16. The five triples were second in the conference, 23rd in the nation, and tied for the second-most in a single season at Tiffin. He recorded 21 games with multiple hits, including five of the last six. He also finished the year with a hit in 11 of his last 12 games, hitting .471 in the month of May.

On the mound, he set a Tiffin single-season record with 88.1 innings of work, posting a 6-1 record in 14 starts with a 5.09 ERA, three complete games, and 69 strikeouts (second all-time at Tiffin). Orr picked up a GMAC Pitcher of the Week award after helping lead TU to the GMAC Championship in May and was named First Team All-Conference as a super-utility player.

Following the collegiate season, Orr played for the Chillicothe Paints of the Prospect League and continued to rake, winning the league batting title with a .409 average. He also recorded nine doubles, a Prospect League record 14 triples, four home runs, 44 RBI, and 58 runs scored in just 46 games. He also went 1-1 with a 3.73 ERA in seven starts on the mound, recording 24 strikeouts in 31.3 innings. At the end of the summer, Orr helped lead the Paints to the Prospect League Championship and was named an East Division All-Star.

Orr’s momentum had continued into his junior season in 2020 before the season was canceled, starting hot with a .412 average in nine games and 34 at-bats. He scored 10 runs and picked up 14 hits, a double, a triple, two homers, 10 RBI, eight walks, and five steals. He also appeared in one inning on the mound, tossing a scoreless frame with two strikeouts to earn a save. He picked up a GMAC Player of the Week honor for Feb. 17-23 after hitting .638 with five RBI.

“Today, Cody will sign with the Astros organization and it is, no doubt, an exciting day for him and his family,” added Wilkins. “But I promise you, in his mind, this is just part of the process. His goal is to make it to the big leagues and, knowing him, I think it is a very realistic goal. Our program continues to grow because of guys like Cody. We all wish him the very best and look forward to following his pro career.”

As of Monday afternoon, the Astros have announced six other free agent signings, including players from UC-Irvine, Southeast Missouri, Texas-Arlington, Missouri, Central Missouri, and Houston Baptist.