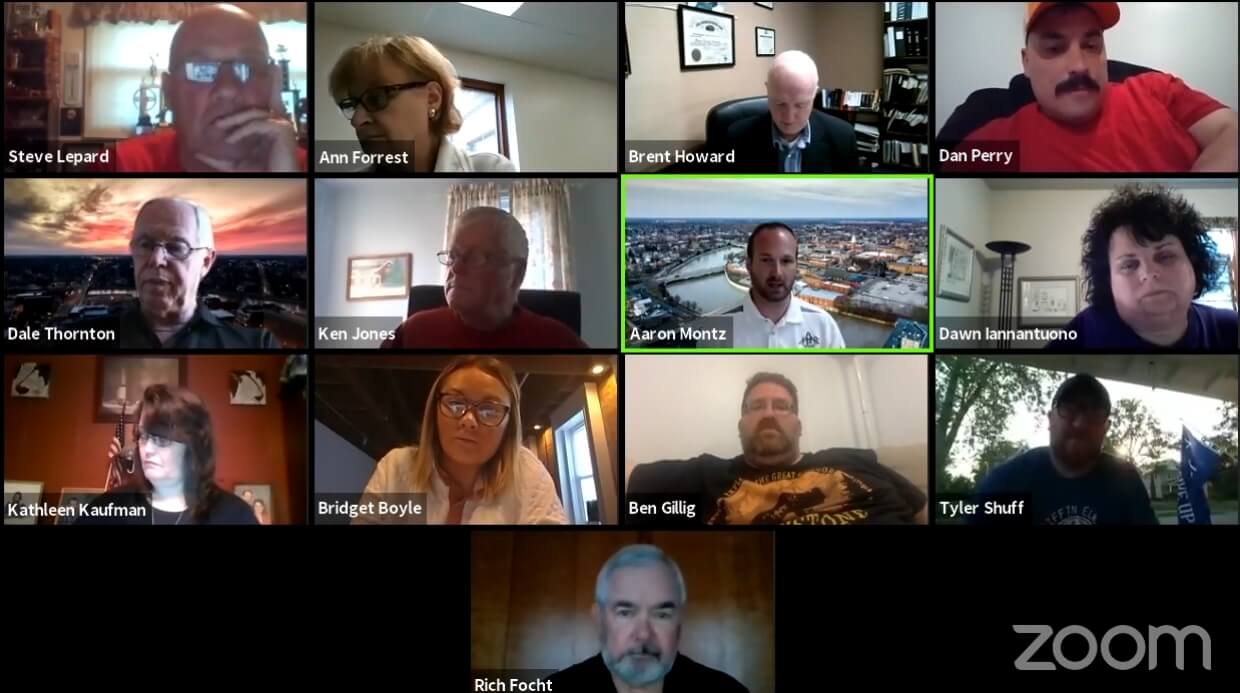 City Council held a nearly 40-minute public hearing session to field comments from residents and business owners regarding the proposal, which would allow for alcohol beverages to be consumed on sidewalks, city green space, and even alleys and parking lots in a designated area downtown.

The meeting was held in a virtual format using Zoom video conferencing software under the provisions of Ohio House Bill 197, as amended, in response to the COVID-19 pandemic. This ensures the public can participate at hearings and observe and hear the discussions and deliberations of all members of Tiffin City Council.

During public comment, council heard from community members in support of the proposed ordinance.

Seneca County Commissioner Mike Kerschner (R) spoke on behalf of himself as well as Commissioners Anthony Paradiso (R) and Shayne Thomas (R) in support of the proposed ordinance.

“We all know that the businesses downtown need a little bit of a spark, and hopefully this will help them with that,” Kerschner said.

Kerschner said commissioners are requesting that the front lawn of the Seneca County Joint Justice Center be excluded from the DORA during business hours. He cited concerns with the presence of alcohol outside of PIVOT court hearings, which allows drug & alcohol offenders to stay out of jail if they agree to recovery and other conditions.

Tiffin City Law Director Brent Howard noted that the commissioners would be able to exclude their property from the DORA, as would a private property owner in the area, by posting signage or other notices.

Bryce Riggs, who was recently appointed as the next executive director of the Seneca Regional Chamber of Commerce & Visitors Services and Destination Seneca County effective July 1, 2020, encouraged council members to approve the proposal, saying he believes it will help support businesses particularly amid the novel coronavirus pandemic.

“Every business owner that I have spoken with is really excited about the DORA and the opportunities that it brings to the local community, and it allows them to expand their offerings. I really see this as an easy opportunity for council to continue to be a strong partner for the local community and the business community, and to offer this tool for businesses especially during the pandemic,” Riggs said.

David Zak, President & CEO of Tiffin-Seneca Economic Partnership, also urged council to approve the proposal. Zak said we are in an “extraordinary situation,” citing the closure of New Riegel-based restaurant Sauced as a result of the economic effects of the coronavirus pandemic.

“They are extremely hard-hit,” Zak said of local businesses.

Eric Kuebler, owner of the Laird Arcade Brewery (LAB), spoke in support of the proposal. Kuebler said he sees it as a benefit not only to his business, but additionally, as a benefit to the community and other downtown-area businesses.

Amy Reinhart, Downtown Street Manager for Tiffin-Seneca Economic Partnership, said 27 other communities throughout the state of Ohio have implemented a DORA, and none of them have had to repeal it due to issues.

“40 percent of businesses that are restaurants and bars are slated to close as a result of the COVID-19 closures,” Reinhart said.

Reinhart said she believes it is “vitally important” to support businesses during this time, and the DORA would be a good way to do so.

Councilwoman Dawn Iannantuono (D) of the Third Ward said she was initially against the DORA proposal when it was previously discussed by council, but she understands the struggle local businesses are experiencing amid the pandemic.

Iannantuono said the main concern she has heard from community members is regarding the proposed time frame for Tiffin’s DORA, which is Monday through Sunday, 11 a.m. to 11 p.m.

Although she still shares some of those concerns, Iannantuono said she believes it is important to support local businesses, especially amid the pandemic, and will vote in support of the proposal to give the community an opportunity to “test run” the program.

Councilman Ken Jones (R) of the Second Ward said he believes the time frame for DORA should be limited to the third Thursday of every month, and every Friday, Saturday, and Sunday from 4 p.m. to 11 p.m.

Councilwoman Bridget Boyle (R) of the First Ward said she believes the assumption that there will be intoxicated people on the sidewalks when students walk home from school is “unfair considering we’ve never implemented this before.” Boyle cited the amount of other communities throughout the state that have not experienced problems as a result of DORA implementation.

“I think this will be a great testing period for DORA, and as we’ve stated, at the end of December, if there’s things we’d like to scale back after truly experiencing it and not assuming how things are going to go, we can do that as a group,” Boyle said. “I’m excited to see how this transpires.”

Councilman Dan Perry (R) of the Fourth Ward said he doesn’t believe local bars and restaurants will irresponsibly serve customers that are visibly intoxicated, and that it would still be possible for individuals to be charged with public intoxication, disorderly conduct, or other charges

Mayor Aaron Montz (R) said council needs to keep in mind this is a trial run. “I’m almost bothered by Councilman Jones’ comments and those from others that this is going to turn into a big drunk party in Downtown Tiffin,” Montz said, citing the other communities throughout the state that have implemented a DORA. “It has been successful in all 27 communites that have implemented this, from big major cities to little villages. None of them have had problems, none of them have cut back hours, in fact many of them have expanded DORA.”

“I’m a little bothered by us saying we do not trust our residents enough to do DORA successfully,” Montz said. “We just need to remember, this is about helping our businesses. We are going to see people come to tiffin because we know we have a very active downtown scene right now.”

Council will hold the third reading of the proposed DORA ordinance during a special meeting on June 22 and is expected to pass the proposal.

If passed, the DORA implementation would expire on December 31 of this year. It could then be renewed by council if it is successful.