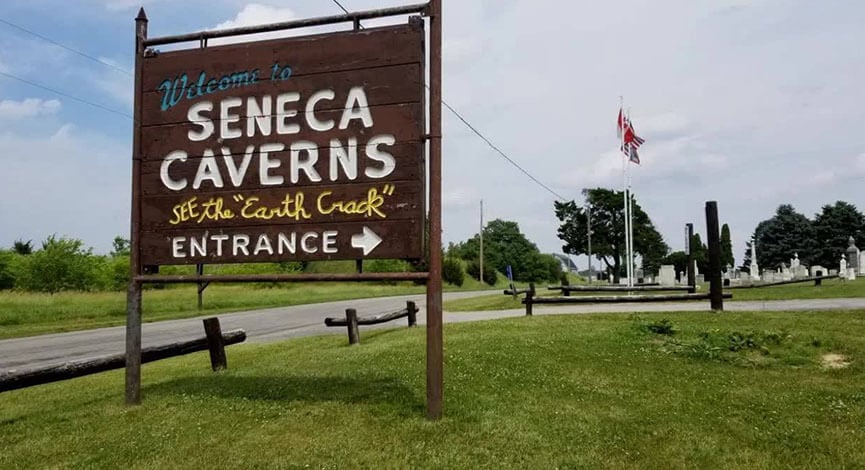 BELLEVUE, Ohio — One of Ohio’s largest underground caverns and one of the nation’s most fascinating geological wonders, Seneca Caverns, will open for its 2020 season on Monday, June 15.

“The cave lights will be on daily from 10AM to 5PM. We can’t wait to explore this summer with you!” a post on the Seneca Caverns Facebook page states.

All visitors are encouraged to follow Ohio’s social distancing guidelines during their visit amid the novel coronavirus pandemic. Facial coverings are permitted, but not required, due to the high humidity and physical exertion required on the cave tour.

Seneca Caverns was discovered in June 1872 by two boys, Peter Rutan and Henry Komer of Flat Rock, Ohio, while hunting rabbits with their dog. Their dog chased a rabbit to a brush pile, where the dog and rabbit then disappeared.

The boys dug around the brush pile and discovered an opening, which was actually a natural sinkhole. The boys fell through the opening, landing in the first level of the cave. They found their dog, and crawled back up to the cave entrance. They then returned home and told everyone about their discovery.

In 1931, Don Bell found a series of passageways and rooms not previously known to exist, which led to an underground river, the water table. With this discovery, Don Bell thought the cave was large enough to develop commercially. Following two and a half years of improvement efforts, Seneca Caverns was opened to the public on May 14, 1933.

Retained close to its original, natural, wild state, this subterranean tour is truly a unique and educational experience you will always remember. Experts have stated that Seneca Caverns may be the only cave of its kind open for public visitation. The official designation as a Registered Natural Landmark by the Ohio Department of Natural Resources reflects this quality.

The caverns are electrically lighted and tours are conducted by a knowledgeable guide.

During the summer months, the tours depart approximately every 30 minutes with the last tour departing one hour before close.

A light jacket is recommended as the cavern’s temperature is a constant 54 degrees Fahrenheit. It is also suggested that comfortable shoes be worn for the tour.