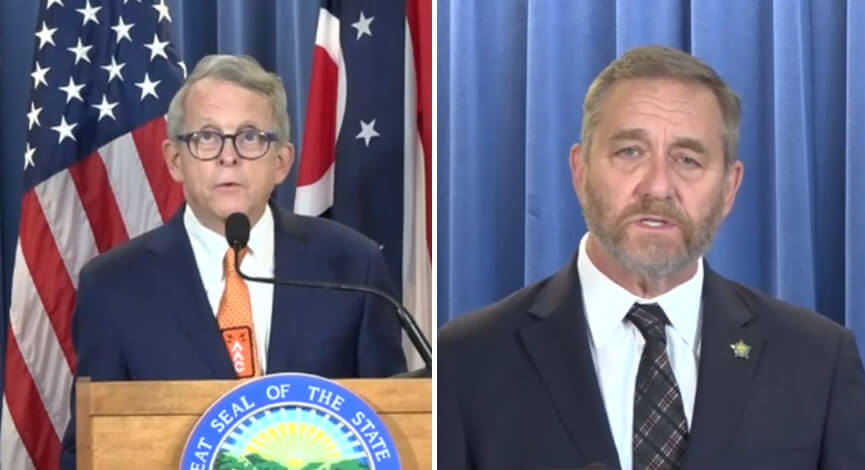 “Under current law, there is no mechanism in Ohio to revoke a peace officer’s certificate for conduct that is egregious, but not criminal,” said Governor DeWine. “Officers can be fired from one agency for racial profiling, lack of professionalism, or for simply not doing their jobs, yet they can carry on with this behavior when they’re hired somewhere else. It is time to treat a peace officer certificate more like a professional license.”

Doctors, dentists, lawyers, barbers, cosmetologists, and those in many other occupations are currently held to high professional standards, which often include a code of ethics and mandated reporting to oversight boards. The boards have the authority to suspend or revoke the licenses of those who do not follow the established professional standards.

“Authority is always given for the benefit of others.  These reforms will help focus our society’s grant of authority on that service to others,” said Attorney General Yost.

The oversight and accountability board as envisioned would be established within the Ohio Attorney General’s Office as part of the Ohio Peace Officer Training Commission (OPOTC). Board members would work with law enforcement experts to establish standards and a code of conduct for Ohio’s law enforcement professionals. The board would also be responsible for ensuring that Ohio’s law enforcement officials adhere to the professional code of conduct. Violations could result in the suspension or revocation of a peace officer’s certificate.

DeWine and Yost both called on the Ohio General Assembly to mandate that qualified, neutral investigative agencies investigate all officer-involved shootings and in-custody deaths.

“The concept of internally investigating these incidents is outdated and does not inspire public trust,” said Governor DeWine. “Even if an agency’s internal affairs unit conducts these investigations strictly by the book, there can still be the perception that investigators are covering for their co-workers. Simply put, law enforcement agencies should not be investigating themselves.”

DeWine and Yost additionally announced that they will immediately begin requiring independent investigations on cases of this nature involving the Ohio State Highway Patrol (OSHP) and Ohio Bureau of Criminal Investigation (BCI). BCI will investigate any cases involving OSHP and vice versa.

To further eliminate any perceptions of impropriety, Governor DeWine and Attorney General Yost also recommended that the Ohio General Assembly mandate that outside prosecutors also be assigned to all officer-involved shootings and in-custody deaths to independently evaluate the evidence and prosecute cases in which charges are filed.

Attorney General Yost announced that his BCI Special Investigations Unit will dedicate highly-trained special agents to form a team that will conduct independent investigations after an officer-involved shooting.

“Statewide public data related to use-of-force will not only provide transparency for Ohio citizens, but it will also improve our understanding of why these incidents happen so that we can proactively work to prevent them in the future,” said Governor DeWine.

The use-of-force data will help Ohio identify the scenarios that most often lead to use-of-force and offer specific de-escalation training related directly to these situations.  The data can also be used by OCJS to direct federal grants into targeted areas to help improve community-police relations.

Governor DeWine today asked the Ohio General Assembly to ban the use of chokeholds by Ohio law enforcement officers unless the officer is justified in using deadly force in situations where an officer is fighting for his or her own life or protecting the life of another.

DeWine also directed all cabinet-level agencies that possess law enforcement authority to examine their use-of-force policies to ensure that chokeholds are only permitted in situations where use-of-force would otherwise be justified.

DeWine also asked the Ohio General Assembly to determine if the state can provide monetary assistance to local agencies to help defer the cost of purchasing equipment and storing video.

Both DeWine and Yost asked the Ohio General Assembly work with them to identify a permanent funding stream for law enforcement training to ensure that every Ohio officer receives advanced training every year.

“Although some agencies have the means to pay for their own training each year, not all can afford it. Ohio must do more to ensure that all our officers have the knowledge and skills to properly protect the public,” said Governor DeWine. “If Ohio is serious about better preparing the officers who serve this state, we must find a permanent funding stream to train every officer, every year.”

As a short-term solution, Governor DeWine announced that he has directed OCJS to reimburse local agencies for up to six hours of law enforcement training on use-of-force, implicit bias, and the de-escalation of situations involving individuals in a mental health crisis or suffering from drug or alcohol addiction issues.

The reimbursement would apply for any officer who has not yet received this training in 2020.

To better ensure that only those with the appropriate character and temperament enter law enforcement basic training in Ohio, Governor DeWine and Attorney General Yost announced today that they are encouraging the Ohio General Assembly to require that all basic training applicants pass a psychological exam as a condition of their acceptance into a police academy.

Following a cadet’s graduation from basic training but before issuing a peace officer certificate, OPOTC would check references and take other critical steps to further ensure that the candidate possesses the appropriate character, fitness, and temperament to be a certified peace officer in Ohio.

Governor DeWine also provided an update today on the creation of the new Ohio Office of Law Enforcement Recruitment within OCJS.

DeWine announced that Dr. Patrick Oliver, Ph.D., who currently serves as the director of Cedarville University’s criminal justice program, has agreed to serve as the lead consultant to the new recruitment office. Dr. Oliver served for 27 years in law enforcement, including 11 years as a trooper with the Ohio State Highway Patrol. He also served as the police chief in the cities of Fairborn, Grandview Heights, Cleveland, and as the Ranger Chief of the Cleveland Metropolitan Parks.

The new Ohio Office of Law Enforcement Recruitment will assist agencies that are working to hire more minorities and women and will encourage these populations to explore a law enforcement career. The office will also develop and share best practices on the hiring of candidates who are best suited for the law enforcement profession.

The proposed reforms were developed with feedback from the Ohio Legislative Black Caucus, Ohio Conference of NAACP, Ohio Chiefs of Police Association, Buckeye State Sheriffs’ Association, Fraternal Order of Police, and others.

Conversations regarding additional actions to improve Ohio’s overall criminal justice system will continue and more reforms are anticipated in the future.