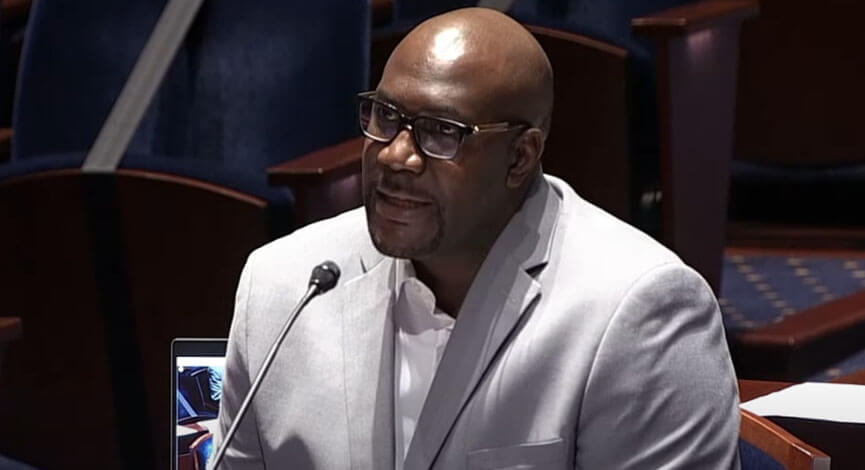 “I can’t tell you the kind of pain you feel when you watch something like that. When you watch your big brother, who you looked up to your whole entire life die, die begging for his mom,” Philonise Floyd testified at a U.S. House hearing on police reform.

He implored lawmakers: “Honor George and make the necessary changes that make law enforcement the solution and not the problem.”

“We cannot bring back George Floyd, Breonna Taylor, or the countless men and women who have died or been injured senselessly by law enforcement, but we can prevent similar tragedies in the future,” Beatty said Wednesday in a statement.

“The Justice in Policing Act will do precisely that by guaranteeing transparency and accountability from the very people sworn to protect and serve all Americans—and at the same time ensure justice for every one of us,” she said.

Vanita Gupta, president and CEO of the Leadership Conference on Civil and Human Rights, told lawmakers on Wednesday that the legislation is Congress’ “most comprehensive effort in decades to substantially address police misconduct.”

But while she welcomed law enforcement legislation, “policing reform alone is not going to solve the crisis that we’re in today,” she said. She urged leaders to “envision a new paradigm” that involves shrinking the footprint of the criminal legal system in the lives of people of color and increasing investment in social services.

“When we stop using criminal justice policy as social policy, we will make communities safer and more prosperous,” Gupta said.

Although House Democrats are expected to pass the wide-ranging police reform bill in the coming weeks, it faces dim prospects of clearing the GOP-led Senate. There, Senate Majority Leader Mitch McConnell has asked Tim Scott of South Carolina to take the lead on a police reform package.

Scott wrote on Twitter Tuesday that he would soon release details on a police reform and retraining package. “I am hopeful that this legislation will bring much-needed solutions,” he said.

Democrats calling for massive overhauls are urging their colleagues to fundamentally rethink the nature of policing.

Rep. Karen Bass, a California Democrat and the chair of the Congressional Black Caucus, told lawmakers Wednesday that if the Democratic-backed bill had been law, “George Floyd would be alive because chokeholds would be banned.”

Breonna Taylor, who was killed by police officers in Louisville, Ky., in March, “would be alive because no-knock warrants for drugs would be banned,” Bass added. Tamir Rice, a 12-year-old killed by police in Cleveland in 2014, “would have graduated high school this May.”

President Donald Trump and GOP congressional leaders are seizing upon the “defund the police” movement to attack Democrats as the November elections approach.

“The vast, vast majority of law enforcement officers are responsible, hardworking, heroic first responders,” Ohio Republican Rep. Jim Jordan said at Wednesday’s hearing. Americans, he said, “know it is pure insanity to defund the police. And the fact that my Democrat colleagues won’t speak out against this crazy policy is just that — frightening.”

Trump praised Jordan’s comments on Twitter Wednesday and used the opportunity to slam the Democratic presidential nominee. “This Radical Left agenda is not going to happen. Sleepy Joe Biden will be (already is) pulled all the way Left. Many, like Minneapolis, want to close their Police Departments. Crazy!” Trump tweeted.

There’s a debate among advocates who want to “defund the police” about exactly what that would mean. Some are calling for steep cuts to police budgets while channeling that cash into social service programs; others want to eliminate police departments entirely.

Biden’s campaign told The New York Times this week that he is opposed to cutting police funding and believes more spending is necessary to help improve law enforcement and community policing.

Democrats accuse the GOP of using the debate to distract voters.

Brown told reporters on Wednesday that Trump and congressional Republicans “are going to play with that term ‘defund the police’ as if Democrats want to eliminate police departments. That’s clearly not true, but that’s what they’ll say.”

Brown added, “Defunding police doesn’t mean we disband police departments. It doesn’t mean we don’t spend money for law enforcement. It means we start thinking more about training police, about discipline, about making sure that mental health services are available in communities and some things aren’t police work that have kind of been defined that way.”