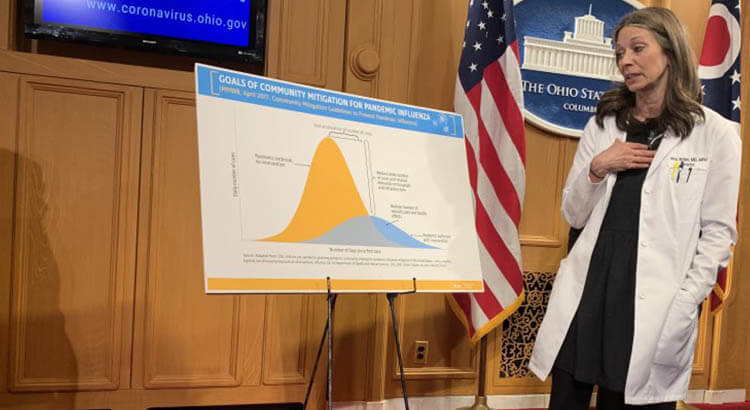 Shortly before Ohio restaurants were set to reopen, Dr. Amy Acton was asked which restaurant she planned to dine at first.

Acton had no answer to give.

“I have no life right now,” she replied, half-jokingly, explaining that her around-the-clock responsibilities managing the state’s coronavirus response did not afford her much time to contemplate a relaxing night out.

It had been a long two months for Acton up to that point. It didn’t get much easier in the weeks since.

On Thursday, Acton announced her resignation as the Ohio Department of Health director. She plans to take on a new role as an advisor to Gov. Mike DeWine on health issues.

The Youngstown native was thrust from relative obscurity to becoming a household name. Acton’s professorial explanations and clever use of analogies — masks as swiss cheese, for example — hearkened back to her days teaching public health at Ohio State University.

Acton’s calm demeanor during the initial COVID-19 press briefings in March helped her popularity grow, with her temperament viewed in contrast to the rising case numbers and a society grinding to a frightening halt.

The rest of America began to take notice. TIME Magazine lauded her “collective calm amid calamity.” The Washington Post called Acton a “white-coated emblem of her state’s forceful coronavirus response.”

There were t-shirts made, a bobblehead, a TV show opening parody and a fan club Facebook page which has grown to over 133,000 members. Her Twitter page gained 55,000 followers despite Acton having never once tweeted or followed another user.

But of course, people joked. Acton is a leader, not a follower.

That was the good side. However, Acton has also been the subject of immense criticism from a segment of Ohioans angry about the mitigation steps taken to ward off the spread of COVID-19.

Acton and DeWine have governed under unusual circumstances during this crisis. She is a member of his cabinet, and he has made clear that he is the one ultimately responsible for the decisions made.

But the Ohio Revised Code gives only her position the authority to take dramatic steps in response to a pandemic. It began with a health order restricting some parts of the Arnold Sports Classic in Columbus. Then went the schools, the mass gatherings, the restaurants.

No baseball. No elective surgeries. No haircuts. All due to health orders led by the governor, but signed by her.

Acton took the slings and arrows for this arrangement. The anger from critics has never been pacified, not from DeWine insisting the buck stops with him or even the fact Ohio has largely reversed course and reopened.

The animus has been a cascading swirl of resentment. While the hostility is largely contained within social media pages, it has also led all the way to Acton’s doorstep.

There were protests held outside her house in Franklin County, with one person carrying a sign reading: “Jewish Leaders John 7:1,” a piece of scripture referring to Jewish leaders wanting to plot the death of Jesus Christ.

Indeed, some of this anger is fueled by anti-Semitism. Acton is Jewish and has occasionally referenced her faith as part of a broader discussion of community. On Holocaust Remembrance Day, she described the need for Ohioans to come together as one in order to halt the virus spread and keep people safe from harm.

That led state Sen. Andrew Brenner, R-Powell, to exclaim he would not let Acton turn Ohio into Nazi Germany. His words were widely condemned in the days that followed, but he suffered no other political harm. A week later, he earned a “Legislator of the Year” award from the Ohio Real Estate Investors Association.

Brenner is far from the only legislative critic. He’s not even the only one to have been condemned for anti-Semitic remarks against Acton. State Rep. Nino Vitale, R-Urbana, has referred to Acton as a “dictator” dozens of times and also as a “globalist” — a term the Anti-Defamation League notes is part of a “long-running conspiracy theory” against Jews.

The legislative criticism has been more than just harsh language. Ohio Republicans have introduced a swath of bills meant to rein in Acton’s power during a pandemic response.

After approving one such bill in the Ohio House, Speaker Larry Householder told reporters it was not a personal response against Acton but instead about legislative oversight. In a nearby hallway, state Rep. Jena Powell, R-Arcanum, addressed constituents on a Facebook video: “We worked on bills to limit the power of Dr. Acton.”

Just 24 hours before announcing her resignation, the Ohio House’s Republican Caucus unanimously passed a “Truth in COVID-19 Statistics” bill. The sponsor, Rep. Diane Grendell of Chesterland, has accused Acton and her department of withholding virus data from the public in order to stoke fears and exaggerate its deadliness.

The hostility remains even after Acton’s departure from the state health director role.

“I say NOT good enough!,” Rep. Vitale posted minutes after the announcement. Then he turned his attention to DeWine and Lt. Gov. Jon Husted. “1 down, 2 to go of the Terrible Tyrannical Trio!”

Those are the political critics. Among others in state government, though, Acton proved herself as a well-respected health director.

That is evident when re-watching the Governor’s Summit on COVID-19 Response from March 5. This was prior to the first virus case being confirmed in Ohio, before Acton became a household name. DeWine asked the two-dozen members of his cabinet in the audience to introduce themselves. When it was Acton’s turn, her peers applauded.

A few weeks ago, a protest flier began circulating among anti-government social media pages calling for a demonstration at the Ohio Governor’s Mansion, located not far from Acton’s own house.

When the time came, no protesters showed up. Up and down the street, though, were a row of yard signs.