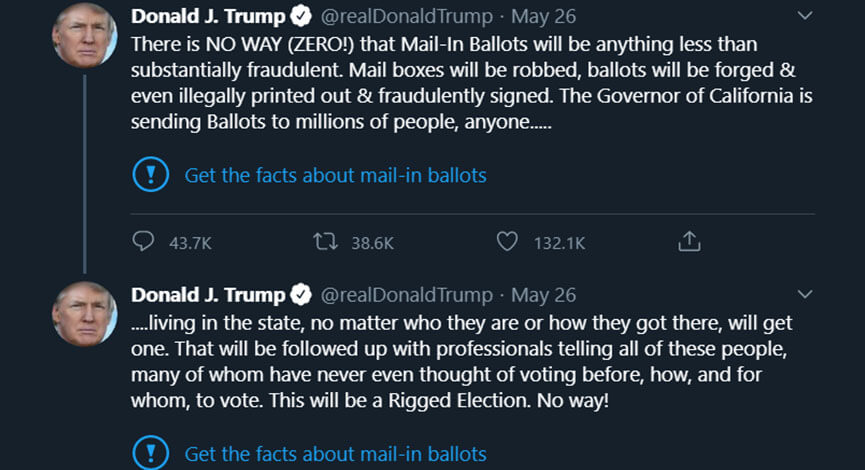 In a landmark action, Twitter has for the first time attached independent fact-checking information directly to two tweets from President Donald Trump. The president’s tweets make false claims alleging that wider use of mail in ballots will result in an increase in voter fraud.

This is far from the first time Trump has posted falsehoods on Twitter. But it is the first time the social media company has taken action against his account.

Twitter has removed tweets from other politicians and world leaders, including Brazilian President Jair Bolsonaro. It frequently removes accounts that are deceptive and spread disinformation. The company has also suspended notable accounts, such as the controversial and hyperpartisan ZeroHedge blog, for posting misinformation.

As a scholar who studies social media, it’s clear to me that the reason Twitter acted this time is that public outcry finally reached a level where the company had enough backing to check a president – but it still doesn’t have enough public support to delete a presidential tweet.

Twitter has corporate policies laying out what it will and won’t do about elected officials posting misinformation, including showing warning information before displaying the tweet and posting accompanying notices. Those apply in this case, but it’s important to remember that the rules are written by the company.

Twitter was not forced into this situation: The company chose to allow governments and elected officials on its platform where there is inconsistent enforcement of the few rules that exist to prevent government abuse.

I see Twitter’s latest action as a signal that the company fears public opinion more than it fears the president and his bully pulpit.

In response, Trump has taken aim at Twitter and is threatening to regulate the corporation, but, as is his usual style, he has not offered details of what he would do, or how it would work.

Trump has come to depend on his Twitter feed as a way to circumvent the press and directly share his unfiltered thoughts with the public. Twitter’s action signals the company may step into the fray, changing the information he is sending to his followers.

The company is buying some time with this move, but the public is likely to keep a close eye on its actions as the presidential election approaches. After the 2016 U.S. presidential election, Americans became much more aware of how loose the rules were for misinformation and propaganda on social media – and are on the lookout for it from all potential sources, including the White House.

Jennifer Grygiel is a social media expert with up-to-the minute understanding of the technology. Grygiel is an assistant professor of communications at Syracuse University.