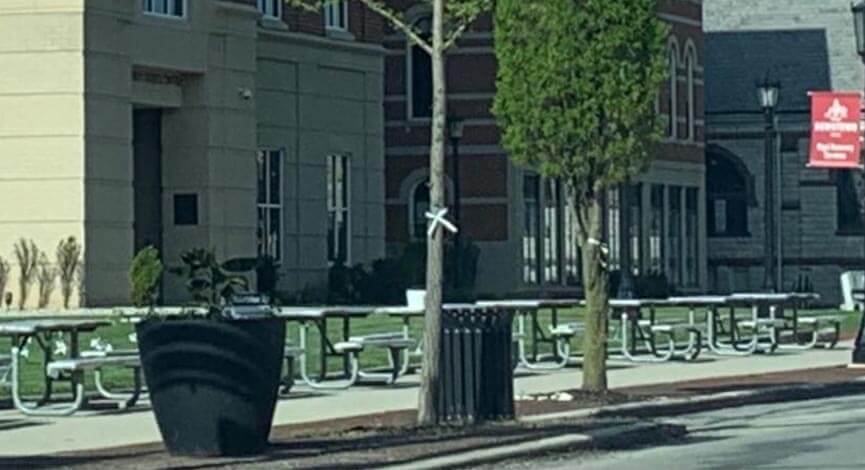 TIFFIN — During the Seneca County Commissioners’ meeting Thursday, Amy Reinhart, Downtown Main Street Manager for Tiffin-Seneca Economic Partnership, updated the board on efforts being made to help restaurants and bars as they re-open from COVID-19 restrictions.

Reinhart indicated that Tiffin-Seneca Economic Partnership has been working with the City of Tiffin to bring picnic tables from local parks to the downtown area in order to provide outdoor seating for restaurants.

Friday was the first day restaurant patios in Ohio could be reopened since Gov. Mike DeWine initially announced shutdown restrictions on businesses March 15. Indoor dining will be allowed beginning Thursday, May 21.

“Most of the outlying businesses, restaurants, bars do have some sort of parking lot or some place where they can set up some outdoor seating, but unfortunately in the downtown, they’re very, very limited. They don’t have any green space or personal private parking lots, so we’re working to try to bring those tables into the downtown to create more seating,” Reinhart told the commissioners during the meeting.

Reinhart asked the commissioners if they would be willing to allow county-owned parking spaces to be used for the purpose of outdoor dining, citing the amount of restaurants and bars located on Washington St., between Market St. and Madison St., where the commissioners’ office is located.

Commissioner Shayne Thomas said he thought it would be a good idea for the commissioners to allow restaurants to use county-owned property for tables, and Commissioners Anthony Paradiso and Mike Kerschner agreed.

Half of the public parking spaces in the RTA Building lot will be used for picnic tables, and the commissioners agreed to allow part of their office parking lot on Madison St. to be used for the effort.

Additional spaces in the commissioners’ lot will be available on weekends, including Fridays, as county offices are only open Monday-Thursday amid the pandemic.

Reinhart noted that there are ongoing discussions with Seneca County Health Commissioner Beth Schweitzer regarding rules and regulations for outdoor seating amid the coronavirus pandemic. In addition, it is being considered to use plastic table cloths on the wooden picnic tables, and under the clear plastic would be a sheet containing the rules and regulations laid out by the Seneca County General Health District.

Reinhart also discussed the proposed DORA ordinance being considered by Tiffin City Council, which would establish a Designated Outdoor Refreshment Area (DORA) downtown where outdoor consumption of alcohol would be permitted.

The first reading for the ordinance will be held during Tiffin City Council’s meeting on June 1. A second reading, where public comment on the issue will be allowed, is to be held June 15. On June 22, a special meeting is scheduled where the third reading will take place, and council will take a vote on the ordinance.

Mayor Aaron Montz has expressed his support for the ordinance and urged council members to vote in favor.

“The DORA will allow bars and restaurants within the district to place additional seating outdoors to expand their capacity and help recoup what may have been lost revenue,” Montz previously said.

State law mandates a minimum of 30 days for a discussion period surrounding outdoor refreshment areas, meaning the earliest date the proposal could be passed and enacted into law for Tiffin would be June 22.

Reinhart said if the DORA ordinance passes, it would likely be active within a few days after appropriate signage is posted.