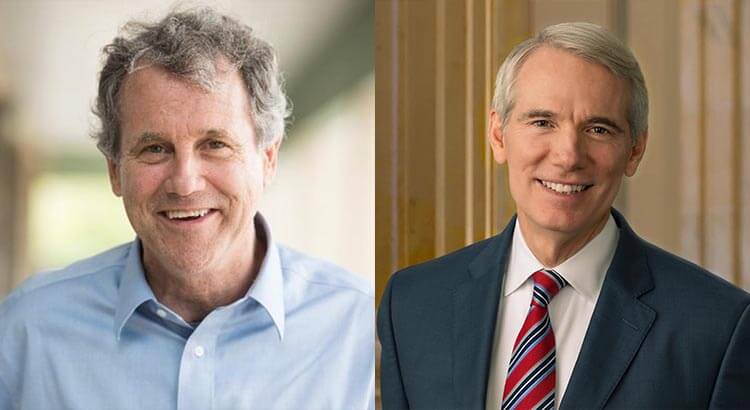 U.S. Sens. Sherrod Brown, a Democrat, and Rob Portman, a Republican, want the federal government to step in — a sign of unity amid disputes among national party leaders.

“We know how hard this crisis is hitting our cities and counties,” Brown said during a press call Wednesday. “They need robust, flexible funding to keep serving Ohioans.”

Portman agrees. “Public safety is now in question,” he told reporters in a separate call on Tuesday. “I don’t think anybody in Congress would want to see public safety compromised in the middle of this crisis.”

Ohio is home to four of five cities that will bear the most immediate fiscal brunt of the pandemic, according to a recent report by the Brookings Institution. Columbus and Cincinnati top the list, while Toledo and Cleveland rank fourth and fifth, respectively.

These cities are especially vulnerable to budget shortfalls because they rely more heavily than others on income taxes, which are more sensitive to declines to employment than property taxes and other sources of revenue, according to the report.

“Ohio’s unique composition of tax revenues makes it much harder from our state and local governments to fully respond to this crisis,” the senators wrote in a joint letter to Treasury Secretary Steven Mnuchin last week.

Another factor affecting cities’ fiscal outlook is their share of workers in industries experiencing significant employment declines, according to the Brookings report.

Unlike the federal government, most states cannot carry deficits, even during crises.

Cities across the state are anticipating revenue losses of between 15 and 25 percent, Dayton Mayor Nan Whaley said last week during a virtual briefing with Brown. “To not be able to provide the services that they’re desperately going to need and will continue to need in our community is going to be hard.”

Timothy DeGeteer, the Democratic mayor of Parma, and David Scheffler, the Republican mayor of Lancaster, pleaded for federal aid on Wednesday’s call with Brown.

“I’m very concerned about our city’s future and what that would look like without direct stabilization funds from Congress,” DeGeeter said.

In Columbus, 12% of workers are unemployed, which will impact its ability to provide core services and to contribute to public-private partnerships that create jobs, according to Robin Davis, a spokeswoman for Mayor Andrew Ginther. “We don’t know the full impact right now,” she said.

The Ohio Department of Health reported more than 16,000 confirmed cases of coronavirus and more than 750 deaths as of Tuesday. Marion County — the site of a major COVID-19 outbreak at an area prison — has among the nation’s highest number of cases per resident, according to the New York Times.

Against a ‘blue-state bailout’

President Donald Trump said last week he would push for state and local aid in forthcoming coronavirus legislation but seemed to weaken his stance this week.

“Why should the people and taxpayers of America be bailing out poorly run states … and cities, in all cases Democrat run and managed, when most of the other states are not looking for bailout help,” he tweeted Monday.

Portman said such concerns shouldn’t prevent Congress from coming to the aid of cities and states to prevent social and civic breakdown.

Senate Majority Leader Mitch McConnell (R-Ky.) had characterized aid to cities and states as a “blue state bailout,” but said earlier this week he would be open to such aid in exchange for legal protections for businesses and employees, according to Politico.

Democratic leaders panned the pitch, indicating a coming clash over the issue.

“I don’t think at this time of the coronavirus that there is any interest in having less protection for our workers,” House Speaker Nancy Pelosi (D-Calif.) told reporters Tuesday.

The Senate is slated to reconvene on Monday. House leaders reversed a plan to do the same and have not yet set a date to reopen.

In March, Congress set aside $150 billion in its $2.2 trillion coronavirus package to help municipalities respond to the pandemic. Of that, about $4.5 billion is going to Ohio, Portman said. The law doesn’t allow officials to use the funds to plug budget shortfalls and only provides direct aid to those with more than 500,000 people, such as Columbus.

Pelosi pledged to fight for the funding. The next coronavirus package “must contain … funding for state and local governments to pay frontline workers,” she said.

Last week, a bipartisan pair of senators unveiled a proposal to create a $500 billion “stabilization fund” for state and local governments. It would divide the money into three equal tranches — one that would allocate funds by population, another by infection rate and a third by revenue losses.

Under the plan, all states and the District of Columbia would receive at least $1.25 billion, and the money could be used to address revenue losses. Cities and counties with more than 50,000 people would be eligible for aid.

It comes in response to a recent plea for help from the National Governors Association.

On Monday, the Federal Reserve announced it would expand a loan program for cities and counties, according to the New York Times.

Portman said he had not seen the proposal to create a $500 billion stabilization fund and declined to say how much additional money he would support for cities and states. “Let’s see what the additional needs are,” he said.

Allison Stevens is a Washington D.C. reporter for States Newsroom, a network of state-based nonprofit news outlets that includes the Ohio Capital Journal.