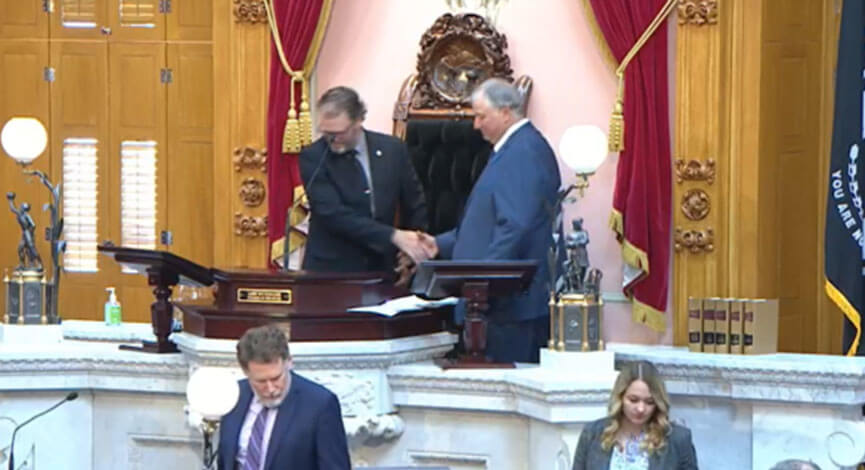 Ohio House Republicans squashed a proposal from Democrats on Tuesday that would have required lawmakers and staff to wear face masks while conducting House business to slow the spread of COVID-19.

The House Rules and Reference Committee, an arm of House leadership, recommended postponing the issue indefinitely, paving the way to the proposal’s demise. The postponement came on a motion from House Majority Leader Bill Seitz.

“This small Democratic minority in the Ohio House is not going to govern what the majority does,” he said after the vote. “They don’t have that kind of control over the duly elected representatives of the people.”

As the virus first swept across the U.S., health authorities advised against the use of face coverings. Today, however, almost every venerable health institution from the CDC, the Cleveland Clinic to the Mayo Clinic advises the use of masks to prevent viral spread from the wearer to those around them.

Cloth masks, unlike N95s, do not protect the wearer. However, the theory goes, if enough of a population wears masks, the prevalence of potentially viral droplets in the shared air would be slashed.

Defending the vote, Seitz cited language that matches March 4 guidance from the Journal of American Medicine stating that there’s no evidence suggesting masks worn by healthy people are effective in preventing people from becoming ill.

Seitz insisted the information was up-to-date and claimed it was current as of April 20. The lead author revised the guidance in an April 17 article.

“Recent studies suggest that coronavirus disease 2019 (COVID-19) may be transmitted by infected persons even in the absence of symptoms of disease,” the guidance states. “Primary benefits of wearing a mask include limiting the spread of the virus from someone who knows or does not know they have an infection to others.”

Seitz did not respond to emailed inquiries about what research he was relying on.

Gov. Mike DeWine has advised — though not ordered — Ohioans to wear masks. Employees, but not patrons, of some businesses are required to wear them.

House Speaker Larry Householder, R-Glenford,  however, has questioned the usefulness of masks and claimed he does not own one. He also said he’s not planning to shepherd any legislation to repair damage the virus caused, like chronic shortages of medical equipment or insufficient COVID-19 testing.

House Republicans have shared Householder’s open skepticism to various preventative health measures that epidemiologists have advised. They recently voted to strip Ohio Department of Health Director Dr. Amy Acton of her ability to issue and implement public health orders for more than 14 days.

At the statehouse, mask usage itself has fallen along partisan lines. Republicans, by and large, have refused. House Democrats backed the measure, have worn masks, and broadcast their decision to do so on social media.

One House Republican who has publicly offered a litany of unfounded conspiracy theories about the origin of the coronavirus has said he won’t wear masks because they cover faces, which are the “likeness of God.”

After the vote Tuesday, Seitz indicated his issues with masks are not purely empirical.

House Assistant Minority Leader Kristin Boggs sent a letter to Householder after the vote lamenting the decision and urging him to follow CDC guidance.

“Being one of the first workplaces in the state to return following the stay-at-home order carries with it a bit of pressure to get it right,” she said. “As elected officials, we have an obligation to lead by example. We remain concerned with the example we are setting for our fellow Ohioans.”