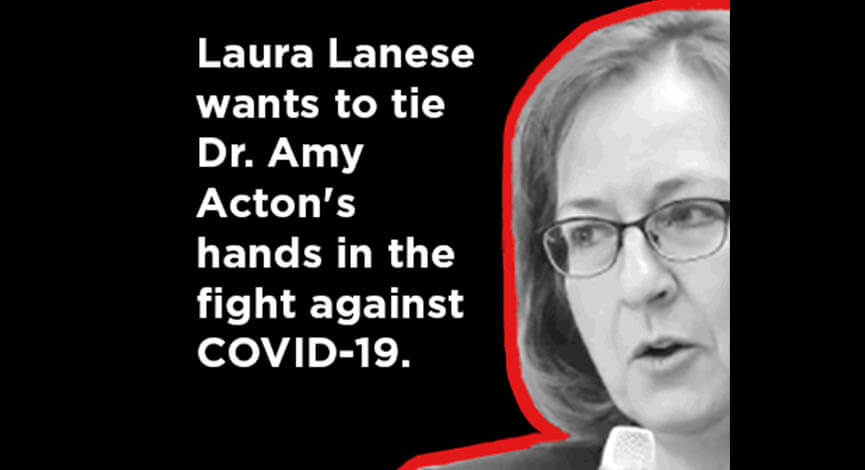 One week after Ohio House Republicans voted to limit the ability of state Health Director Dr. Amy Acton to protect public health during the coronavirus outbreak, the Ohio Democratic Party on Wednesday launched paid Facebook ads calling out the GOP representatives for “their out-of-touch decision to stand with extremists.”

“Dr. Amy Acton is working hard to keep Ohioans safe during a global pandemic,” said Ohio Democratic Party Chairman David Pepper. “Unfortunately, GOP lawmakers in the Ohio House have decided to oppose Dr. Acton and take the side of reckless extremists who want to put at-risk workers and everyday Ohioans in danger.

“Ohio Democrats support a responsible reopening for Ohio — and that means we must prioritize making testing more widely available, requiring masks to be worn in public places, protecting workers from exposure on the job and retaliation by their employers and providing safe child care options. When most Ohioans trust and respect her, attacking Dr. Acton shows how completely out of touch Statehouse Republicans have become. In addition, many of the attacks have been both offensive and extreme. We will hold them accountable today and at the ballot box in November.”

Last Wednesday, the Ohio House voted 58-37 on Senate Bill 1, which would allow politicians on the Joint Committee on Agency Rule Review to overrule health officials in deciding whether to extend a stay-at-home order — which health experts agree has been a critical tool in fighting the coronavirus outbreak in Ohio. Gov. Mike DeWine has already pledged to veto the bill.

Public polls show that the majority of Ohioans support Dr. Acton’s handling of the coronavirus crisis.

The Columbus Dispatch editorial board called the legislation “an invitation to contagion and exactly what our state does not need in the midst of the first global pandemic in a century.” The editorial also notes that anti-Acton protests “appear to be led by an amalgamation of right-wing adherents — hardcore Trump backers, gun-rights extremists, people who don’t like foreigners and, in at least one shameful display, open anti-Semites.”

The ads are targeting the following GOP incumbents facing election or re-election: