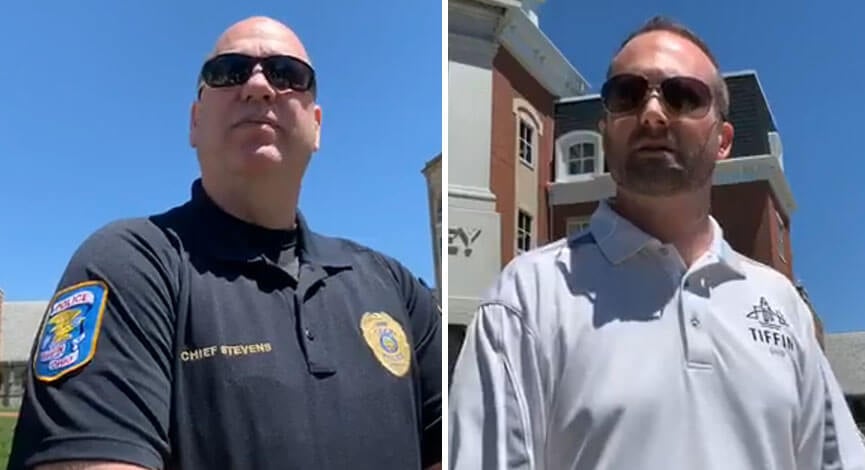 Police Chief and Seneca County Sheriff-elect Fred Stevens, Mayor Aaron Montz, and Seneca County Commissioner Shayne Thomas were among the local leaders who made an appearance at a protest in Downtown Tiffin Sunday afternoon.

The protest was one of many in cities coast to coast over the death of unarmed black man George Floyd at the hands of a police officer in Minneapolis, Minnesota.

Starting at 1 p.m., dozens of demonstrators held signs and participated in chants such as “I Can’t Breathe,” “Silence is Violence,” “Black Lives Matter,” and “Hands Up, Don’t Shoot” on the lawn of the Seneca County Joint Justice Center.

When asked why he came to the protest, Chief Stevens said he wanted to show that the Tiffin Police Department supports peaceful protests and understands the frustrations of demonstrators.

“I want to show that the Tiffin Police Department supports peaceful protests, and I understand the frustrations and injustices. There’s no way to excuse what that officer did. What I told my officers, that’s pure lack of training, pure lack of supervision, pure lack of accountability, and definitely lack of transparency, and we don’t have that in our community or in this area. We have great community relations, and this is an example of it. We want to support everybody and let them have their freedom and right to protest,” Stevens said.

“We stand with the message here that what they did was wrong, and they should be charged. There should be justice for George Floyd,” Stevens added.

Mayor Aaron Montz said he was at the protest to show support for the demonstrations. Montz said he believes it’s important that “people want to have this conversation.”

“I think it’s important we have conversations about what’s going on in this country instead of just avoiding the problem,” Montz said.

Prior to the protest, Montz wrote on Facebook that words could not describe “the anger [he] felt watching the video of George Floyd.”

“We as a nation must come together and stamp out hate and brutality of any kind. The arrest of Officer Chauvin is a positive first step. However, we do not live in a vacuum, and until we address the larger systemic issues facing our nation, we will not be able to properly heal and move forward. We must all commit to treating one another fairly and equally regardless of race, religion, sex, age, sexual orientation, or physical or mental disabilities,” Montz wrote.