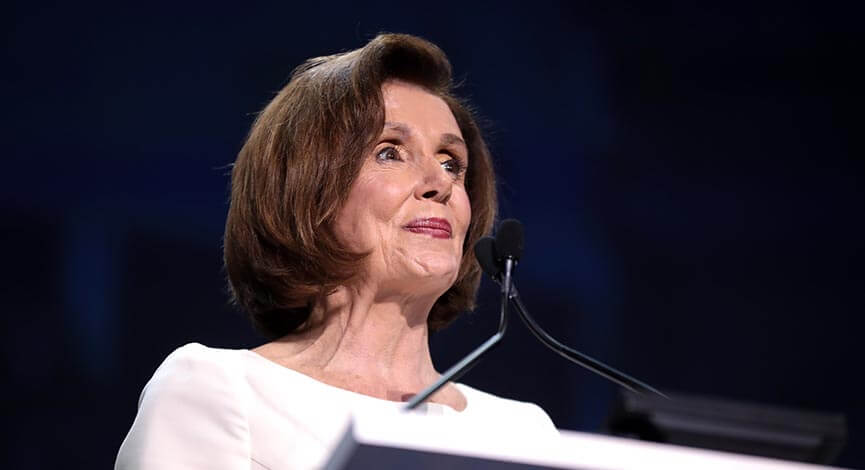 WASHINGTON — The U.S. House on Friday cleared a massive $3 trillion relief bill aimed at blunting the health and economic impacts of the COVID-19 pandemic.

The sweeping legislation, which passed largely along partisan lines by a vote of 208-199, carries a price tag that’s roughly equal to the four previous coronavirus response bills already signed into law.

The measure contains nearly $1 trillion for state, local, territorial and tribal governments. It would also offer direct payments of $1,200 to Americans, extend federal unemployment benefits, increase funding for nutrition assistance programs and ensure that every American can vote by mail in the November election.

But the measure appears to be just a starting point for negotiations in the next round of congressional relief. The White House has issued a veto threat. Senate Majority Leader Mitch McConnell (R-Ky.) declared the bill “dead on arrival” in the upper chamber of Congress. And 14 House Democrats voted against the bill, including moderates facing tough reelection bids this fall. Rep. Pete King of New York was the lone Republican who voted for it.

House Speaker Nancy Pelosi (D-Calif.) called the legislation an “urgently-needed relief package to protect the lives and livelihoods of the American people from the devastation of the coronavirus crisis.” Many of her GOP colleagues, however, decried the bill as a roundup of Democratic priorities that had no chance of winning the votes of Senate Republicans.

Rep. Joyce Beatty (D-Ohio) said on the House floor ahead of the vote, “I challenge my colleagues to join us and vote for this big and bold bill. Americans deserve every penny of it.”

Rep. Donna Shalala (D-Fla.) said her office in Miami “is not getting calls, we’re getting cries for help. My neighbors are scared of both a virus that could kill them or their loved ones and worried about how they will make their next rent or mortgage payment or buy groceries, or when their children will go back to school.”

She warned that unless Congress passed the bill, “my county and cities and school board will not be able to pay teachers or firefighters or police officers or transit workers or even hire contact tracers to help get this virus under control.”

Rep. Alcee Hastings (D-Fla.) called the bill a desperately needed relief package. “I continue to receive emails, letters and phone calls from constituents bearing the brunt of this administration’s disorganized response to the COVID-19 pandemic,” he said.

“Americans are afraid, not just of whether they’re going to make ends meet, but of whether they’re going to make it through this pandemic at all,” Hastings added. “Yet this White House remains utterly disconnected from reality, moving at every opportunity to reject science, sideline medical experts and pat themselves on the back for a job well done, even as the COVID-19 pandemic tears our communities apart.”

Rep. Kweisi Mfume (D-Md.) said amid the partisan squabbling on the House floor Friday, “This is not a Democratic effort. This is an effort that is supported by Republicans, and somebody needs to say that. Republican governors, Republican mayors, and there will be Republican members of that side of the aisle that vote for this.”

Many Republicans in the House, meanwhile, accused their colleagues across the aisle of wasting valuable time.

Oklahoma Republican Rep. Tom Cole said of the Democrats’ bill: “It’s more like a liberal wish list. It would make more sense in my view … to just send it straight to Santa Claus than to send it to the United States Senate.”

Democratic Rep. Cindy Axne of Iowa was among the Democrats who opposed the measure.

“I could not in good conscience vote to accept this Washington gamesmanship, or vote to approve unrelated wastes of taxpayer dollars, while Iowa sees its COVID-19 case rates climbing and parts of my district become a national hotspot,” she said in a statement. “I will always stand up to anyone — even my own party — when it comes to doing what’s right for Iowa.”

U.S. House lawmakers on Friday also approved a landmark rules change to allow members to work from afar during the pandemic.

The chamber approved a resolution that authorizes committees to work remotely during the pandemic and would allow voting by proxy. Under the resolution, one member could serve as a designated proxy for up to 10 members. It’s the first time in congressional history that remote floor voting will be allowed.

The New York Times noted that the COVID-19 outbreak prompted Congress to alter the voting-in-person requirements that persisted even through Philadelphia’s yellow fever outbreak of 1793, the Spanish influenza of 1918, the Sept. 11, 2001, attacks.

“Let me say at the outset that there is no substitute for the personal interaction of members in a committee room or on the House floor,” House Majority Leader Steny Hoyer (D-Md.) said. “But when that is not possible — because it poses a mortal danger to the health of members, staff, press, and the public — we must provide for alternative ways to do the people’s business.”

Rep. Jamie Raskin (D-Md.), who lives about 20 minutes away from the U.S. Capitol, said in an interview earlier this month, “I think I’m going to be a pretty busy guy if we actually end up with some kind of distance voting by proxy.”

The largely party line vote on the resolution was 217-189. Three Democrats voted against it: Reps. Elaine Luria of Virginia, Rick Larsen of Washington and Tom O’Halleran of Arizona.

The resolution also directs a study into whether and how lawmakers can eventually vote remotely via secure technology.

Republican lawmakers berated that resolution, declaring that it sends the wrong signal to the country when essential employees are going to work in person every day, but members of Congress can opt to stay at home. They’ve also questioned whether remote voting is constitutional.

“You gotta be here to do the business of the people,” said Rep. Jim Jordan (R-Ohio.) “You can’t phone it in. You can’t mail it in.”

Rep. Virginia Foxx (R-N.C.) called it “a dark day in the history of our country” as Democratic leadership moved to allow proxy voting. Democrats are using the pandemic “to justify gutting the Constitution,” she said. “It is disgraceful.”