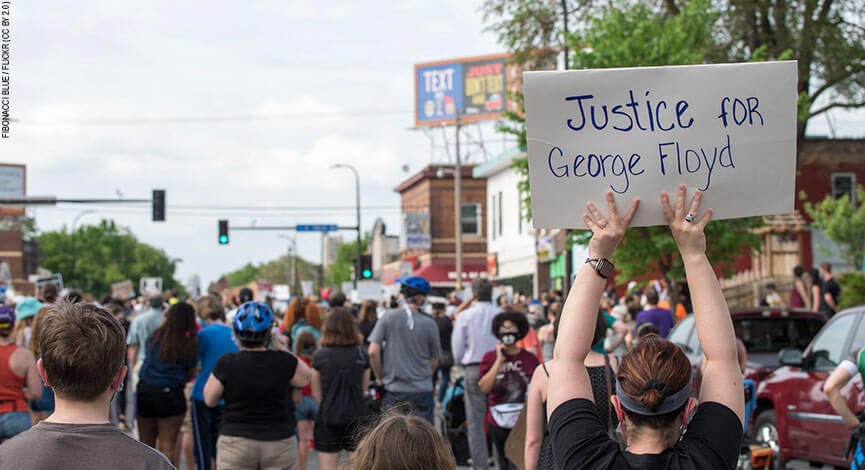 After a night of demonstrations related to the Minnesota death of George Floyd, Ohio legislators condemned the police actions that led to the man’s death, and called for racism to be declared a public health crisis.

Thursday night street protests occurred in downtown Columbus calling for nationwide action, as police used tear gas and riot gear to force crowds to disperse. Multiple windows in the Ohio Statehouse were broken, along with some other buildings around Capitol Square.

“Black America woke this morning to a nightmare that seems to never end and a continued feeling of hopelessness that nothing will ever be better,” said state Rep. Stephanie Howse, D-Cleveland, president of the OLBC, in a statement. “Black Ohioans deserve to be heard today, tomorrow and always.”

Howse mentioned the COVID-19 pandemic, saying it is disproportionately affecting people of color, something Ohio Gov. Mike DeWine has acknowledged at press conferences about coronavirus.

On Friday, DeWine said the video of George Floyd was “absolutely horrific” and that the police officer who kneeled on Floyd’s neck violated police training and conduct.

“What Fran and I felt and feel: sorrow and disgust at what we saw,” DeWine said. “We can not fully comprehend or imagine what an African American family must feel looking at that.”

DeWine said he hadn’t yet read the legislation proposed by the OLBC, but planned to.

The legislation would promote community engagement on issues of racism, commit to reviewing ordinances “with a racial equity lens” and build alliances with local organizations.

The deadline for cosponsors to sign on to the bill is Monday, and it is expected to be formally introduced on Tuesday.

Other legislators spoke out against the protests, with state Rep. John Becker, R-Union Township, Clermont County, calling those participating “violent thugs” as he shared a news report from Thursday.

State Rep. Rick Carfagna, R-Genoa Twp., cited a statement from the Genoa Twp. Police Department on social media, honoring Ohio police for their work and “praying for justice in Minneapolis, an understanding of the fear and anger that are fueling these protests, the safety of law enforcement officers everywhere, and a calming to the senseless acts of destruction that do nothing to achieve the justice that is needed.”

“Violence in all forms is wrong,” Balderson wrote in a message posted to his Facebook account. “This includes the protests that led to rioting overnight in Columbus.”

“Less than two weeks ago, those protesting the State at Home orders stood outside the Statehouse, armed, and pounded on the windows of the Statehouse,” the statement read. “Their protest was not disrupted. They were not gassed. Last night, the treatment was different. The disparate treatment Black Americans face is everywhere, even when they gather in protest.”

Senate Minority Leader Kenny Yuko, D-Richmond Heights; and Sen. Hearcel Craig, D-Columbus; called the demonstrations “a reflection of the frustrations shared by many Americans with the long-term systemic problem of racism.”