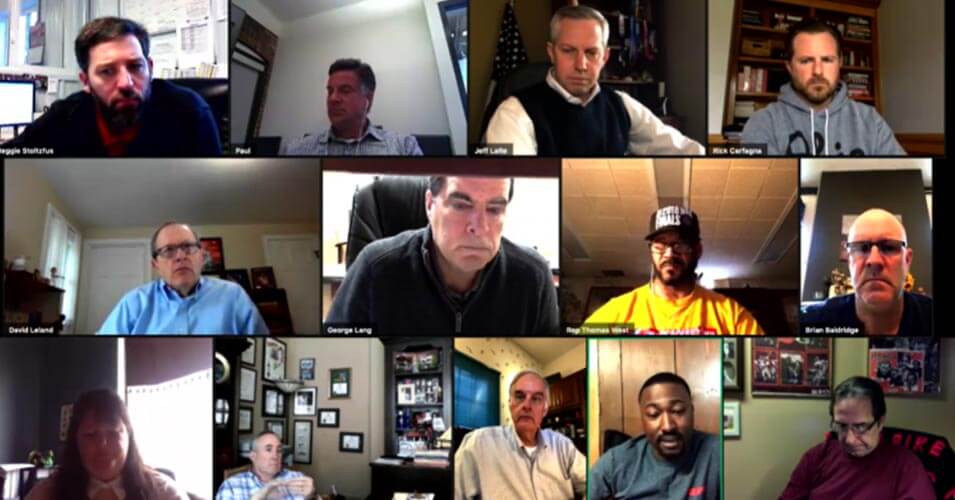 It was only minutes after state legislators ended their Zoom conference meeting, with many urging a swift reopening of the economy, that the Ohio Department of Health announced a new slate of virus deaths and illnesses.

Fifteen more Ohioans had died in the prior 24 hours. An additional 363 people were confirmed to have the new coronavirus — more people than could fit in an entire field-level section to watch the Ohio State Buckeyes football team.

And yet, there is a growing momentum among some Ohio legislators to speed up the return to normalcy.

Members of the newly-formed Economic Recovery Task Force within the Ohio House of Representatives held a virtual meeting on Monday. The main message presented by legislators, most of them Republicans, was that Ohio should reopen the economy sooner rather than later. Members also heard from health care professionals who collectively spoke about the increasing harm of not being able to provide care to Ohioans.

The task force is meant to help “lay the foundation for economic recovery from the COVID-19 pandemic,” a news release announcing the group stated last week. It is led by Rep. Paul Zeltwanger, R-Mason, who also chairs the Ohio House’s Economic and Workforce Development Committee.

Zeltwanger said a response to the pandemic depends on how you interpret the data. The United States now has the most total deaths due to COVID-19 in the world, Zeltwanger acknowledged, but he also noted the U.S. does not have as high of deaths per capita as in other countries.

Republican State Rep. Nino Vitale offered his own interpretation of the data. The Urbana legislator said he had a “difficult time” assessing the severity of the ongoing pandemic, claiming there are people dying with symptoms of COVID-19 who are included as having directly died as a result of the virus.

As of Monday, lab tests confirmed 268 Ohioans have died due to COVID-19. Another six are believed to be caused by the virus by health providers, but their cause of death is not fully certain.

The state tracks the confirmed cases and the “probable” cases separately on the state’s COVID-19 page commonly used by reporters and citizens alike to track the latest updates.

In Vitale’s mind, though, the state health department experts are only “guessing.”

“Seems to be one consistent theme, that we want to get businesses back open and get back to normal,” Upchurch said. “However, I have to say, if we were to do that sooner rather than later, we would still make ourselves vulnerable to an increase in infections, especially as we talk about the lack of adequate testing across the state of Ohio.”

He asked the three medical professionals to speak about the potential of increased spread by reopening the state too quickly.

Dr. Ian Thompson, a surgeon from Springfield, said the eventual application of “rapid testing” will be a major breakthrough. Such tests could provide results within minutes, allowing doctors to treat patients for issues unrelated to the virus so long as they test negative upon arriving for an appointment or procedure.

The two other guests were Dr. Philip Slonkowski, a pediatric dentist from rural Western Ohio, and Dr. Steven Tornik, an osteopathic doctor who said 10 patients of his family practice just outside of Columbus have contracted the virus. (Nine have since recovered and the 10th is on their way, Tornik told legislators.)

All three outlined major impacts to the statewide shutdown, which has included a pause on non-essential, in-person medical care. Thompson described complications to halting patients’ physical therapy treatments, which may lead to further complications down the road. Slonkowski said his dental practice, now entering its fourth week of closure, is starting to receive calls from families complaining that kids’ teeth are hurting without access to care.

The dentist said his office now has a rapidly-growing backlog of operations and “preventative checks” that will be difficult to manage once the practice reopens. The ongoing shutdown will prove even more harmful to children with braces, Slonkowski said.

“Delaying the treatment means teeth will be moving in directions that are unsupervised,” he said, noting some with braces are ordinarily seen every few weeks.

Slonkowski said it is up to state professionals with the Ohio State Medical Association and the Ohio Dental Association to plan ahead in supplying the reopened health care offices with enough personal protection equipment (PPE). Without the PPE, he said, the offices cannot function safely and patients may not feel comfortable returning for care.

The three professionals, along with most on the task force, recognized the need for Gov. Mike DeWine and Dr. Acton’s shutdown orders. Still, they warned about the resulting consequences as each week passes without a “return to normal.”

Zeltwanger said legislators will need to assist the state government in making the tough decisions to steer Ohio back on course.

The Economic Recovery Task Force is made up of 24 members of the Ohio House of Representatives, all chosen by Speaker of the House Larry Householder, R-Glenford.

Women and Democrats are underrepresented in the group:

The task force is meeting again Tuesday to hear from several state economic leaders about how the pandemic has affected restaurants, hotels and salons.