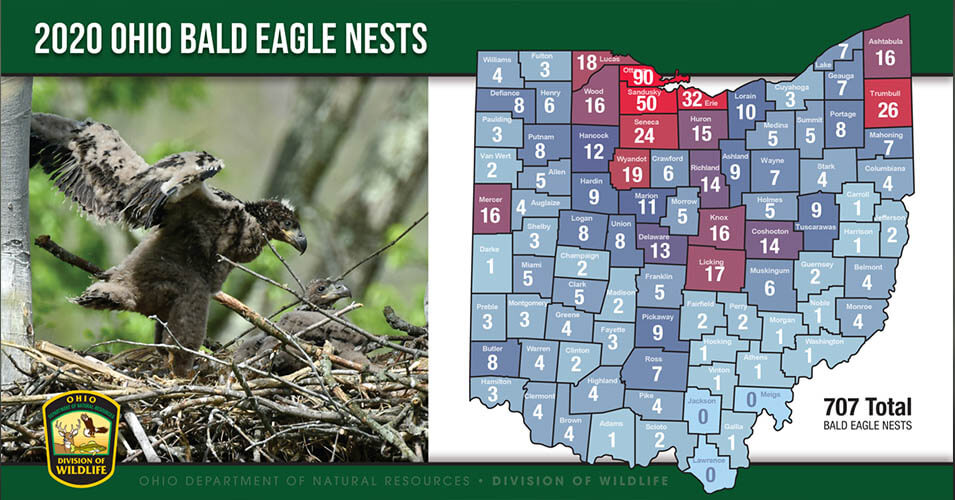 Thanks to thousands of reports from citizen scientists during February and March, 707 bald eagle nests have been confirmed in Ohio!

The Ohio Department of Natural Resources’ Division of Wildlife received approximately 2,500 reports from the public for the 2020 census. Wildlife staff, including wildlife officers and biologists, verified nest locations in 85 counties.

The bald eagle is one of Ohio’s greatest wildlife success stories. The nest census was the first undertaking to discover all such sites for the first time in eight years. The results show an increase of 152% from the 2012 census, when 281 nests were recorded in Ohio. The high number of nests represents the hard work and dedication put forth for Ohio’s wildlife.

In the early 1980’s the Division of Wildlife started acquisition and expansion of wetland habitat first by the establishment of the Ohio Wetland Habitat Stamp (supported by duck hunters) and the North American Wetland Conservation Act NAWCA (an initiative led by hunters) that provided more money to specifically acquire and improve habitat like Pickerel Creek, Killbuck, Pipe Creek, Killdeer, Big Island, Mosquito, Mallard Club, Metzger – all of which have high quality eagle habitat.

Remember that bald eagles are protected under both state law and the federal Bald and Golden Eagle Protection Act. It is illegal to disturb bald eagles. When viewing these majestic birds, remember to respect the bird’s space and stay at least 100 yards away from the bird or nest. Disturbing bald eagles at the nest site could lead the pair to abandon the eggs.

As with many of Ohio’s native wildlife species, bald eagles require specific habitat conditions to thrive. Bald eagle habitat protection and research is funded by the sale of bald eagle conservation license plates, income tax check-off donations to the Endangered Species and Wildlife Diversity Fund and sales of the Ohio Wildlife Legacy Stamp. Learn how to support Ohio’s magnificent wildlife like the bald eagle at wildohio.gov/support.