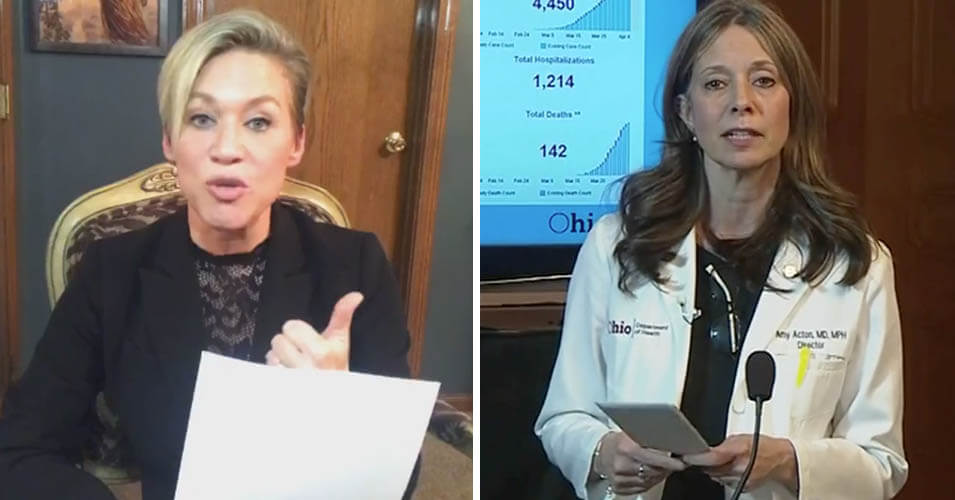 A Republican state senate candidate is comparing the Ohio Department of Health Director, Dr. Amy Acton, who is Jewish, to a Nazi physician who performed deadly experiments on prisoners at concentration camps during World War II.

Melissa Ackison, of Marysville, who is running in a heated Republican primary for the 26th district state senate seat, took to her campaign Facebook page Thursday to defend State Sen. Andrew Brenner (R-Powell), who was condemned by Gov. Mike DeWine (R) after he made a controversial Facebook post on Holocaust Remembrance Day in which he said he wouldn’t let Acton “turn Ohio into Nazi Germany.”

“Remember when I told you they would attack the representatives who dare to speak out with truthful comparisons of historical tragedies of not so long ago?” Ackison asked in her Facebook post Thursday. “Here’s your ‘Republican’ Governor attacking a respected Conservative and throwing him to the wolves.”

Ackison said she believes DeWine “lashed out” at Sen. Brenner “for making comparisons of Gestapo style tactics and Nazi Germany while boasting that Dr. Acton is ‘saving lives.'”

“DeWine conveniently omits the part about Acton defying her own health orders to ensure babies are still being sucked out of their mothers wombs and their limbs torn off, using the same tactics Josef Mengele used on pregnant Jews,” Ackison said in the post.

The comments from Ackison came just days after Acton made reference to Holocaust Remembrance Day and her own Jewish heritage.

Acton described feeling “optimistic that we have the grit and resilience to weather a war, especially given the outstanding leadership we have.”

Gov. Mike DeWine had followed Acton by noting his own father’s service in World War II in liberating concentration camps. DeWine recounted how his father witnessed the camps’ ovens first-hand and remembered the images for the rest of his life.

To Ackison, however, the Nazi Germany comparison rests with the present Ohio leadership. The cover photo on Ackison’s campaign Twitter account shows Jews lined up against a wall during World War II. 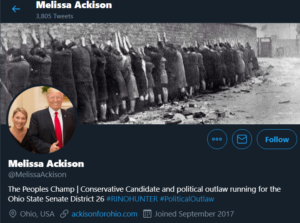 Ackison, a small business owner and conservative activist from Marysville who is currently a candidate in the Republican primary for the 26th district Ohio Senate seat, made national headlines last week after a photo of her and several other pro-Trump protesters yelling into the windows of the atrium at the Ohio Statehouse went viral.

A recent protest organized by far-right groups at the Ohio Statehouse featured several instances of anti-Semitism symbols, as reported by cleveland.com.

Ackison, who is running against current State Rep. Bill Reineke (R-Tiffin) in the GOP primary for the 26th district state senate seat, has previously called for Gov. DeWine’s impeachment over his response to the coronavirus pandemic, including the stay-at-home order and reworking of Ohio’s primary election that was originally scheduled for March 17.

TiffinOhio.net News has reached out to the Ohio Republican Party (ORP) for comment on Ackison’s remarks. As of Thursday evening, there was no official comment from ORP on the remarks. The story will be updated with any responses from ORP if they are received.