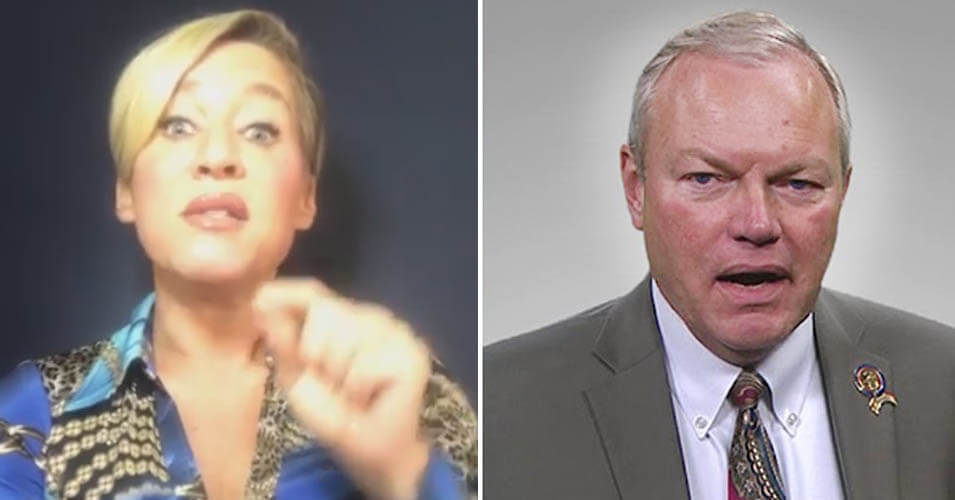 The Republican primary between Ackison and Reineke for the 26th district state senate seat has been recognized as one of the most contentious primary races in Ohio state legislative history.

“He is not 100% supportive of the Second Amendment. In fact, he’s never been involved with anything related to concealed carry or stand your ground, and in fact, voted against both of those,” Ackison said in the video, referring to a letter Reineke’s campaign sent to voters in which he boasts his pro-gun credentials.

“He’s literally lying to you,” Ackison said. “And he’s spending thousands and thousands of dollars to lie to you.”

Ackison also ripped into Reineke for the state of Ohio’s economy, saying he’s “part of the economic standing we see right now.”

“The other thing that’s concerning is he says, ‘As a businessman I understand the harmful impact of higher taxes’ — no you don’t. In fact, while he was in office, 2019 closed with negative job growth and record spending. He was part of that. This man, Bill Reineke, was part of the economic standing that we see right now,” Ackison said.

“Since this economic shutdown, he hasn’t taken to Facebook Live, he hasn’t had any conversations with any of you, he has posted a total of 27 sentences on his Facebook that have absolutely nothing to do with getting the economy up and running again,” Ackison said.

Ackison said she believes “one of the most disgusting things” Reineke has posted to his campaign Facebook page is when he thanked first responders for their service.

“Why would you thank the first responders Bill Reineke when you voted against them when it came to their workers’ compensation benefits? That’s right folks, the men and women who are taking care of the sick right now in the state and considered essential workers, Bill Reineke voted against them from being able to receive workers’ compensation. So it certainly couldn’t hurt for you to go to his Facebook page and remind him of that,” Ackison told her followers.

Ackison said she is “rated as the most conservative in the state of Ohio,” while Reineke is rated as a “moderate” by iVoterGuide.

“You are not a conservative, you are actually rated based on your crappy record, as a moderate by the iVoterGuide,” Ackison said. “So to say, ‘my conservative principles aren’t born of convenience,’ yes sir they are, because you’re a moderate and your record speaks to that.”

“When he says he’s a conservative, there’s no truth to that,” Ackison said of Reineke. “Bill Reineke wasn’t down protesting with any of you. Bill Reineke was part of the problem when we came in with record spending and negative job growth closing 2019 out. And Bill Reineke voted against constitutional carry and stand-your-ground putting hundreds and hundreds of you in a terrible position when you couldn’t get your CCWs picked up to protect your family.”

Ackison encouraged her followers to ignore letters in the mail from Reineke or other forms of his campaign advertising. “Now is not the time to be falling for this crap being sent to your houses by an establishment RINO, 100% funded by the Republican Party, 100% funded by the special interests, versus me, who has been with you from the very beginning, refused money from the PACs, the super PACs, the special interests, and only has an interest in representing the people,” Ackison said.

“You have got an absolute liar, who will continue to ignore you, just as he always had. The man has never had a town hall. He’s never been able to speak on a microphone without reading political talking points given to him by the puppet masters within the Ohio Republican Party, he charges you a thousand dollars to get into a room with him for one of his crappy fundraisers,” Ackison said of Reineke. “And it’s the reason why I’ve had so many calls from elected officials in his area saying ‘he’s done absolutely nothing for us.'”

“The real testament here is: Where has Bill Reineke been since the shutdown? He’s been nowhere and then had the nerve to thank the first responders that he voted against from them receiving any type of workers’ compensation. Shame on you, so disgusting, ratchet, just completely ratchet. Let him know what you think of him on his Facebook page, let him know that you intend to vote for conservative constitutionalist Melissa Ackison,” Ackison added.

While Reineke, who is currently serving his third term as state representative for all of Sandusky County and the majority of Seneca County, has gone back to keeping a relatively low profile, Ackison has turned much of her attention to new targets: Ohio Governor Mike DeWine (R) and Ohio Department of Health Director Dr. Amy Acton.

Ackison has received national attention after she led a protest at the Ohio Statehouse while Gov. DeWine was delivering his daily press conference on COVID-19.

Ackison has previously called for Gov. DeWine’s impeachment over his response to the coronavirus pandemic, including the stay-at-home order and reworking of Ohio’s primary election that was originally scheduled for March 17.

Additionally, Ackison called on Fran DeWine, the First Lady of Ohio, to “fire up the oven” and “bake a cake and celebrate with an ice cream social.”