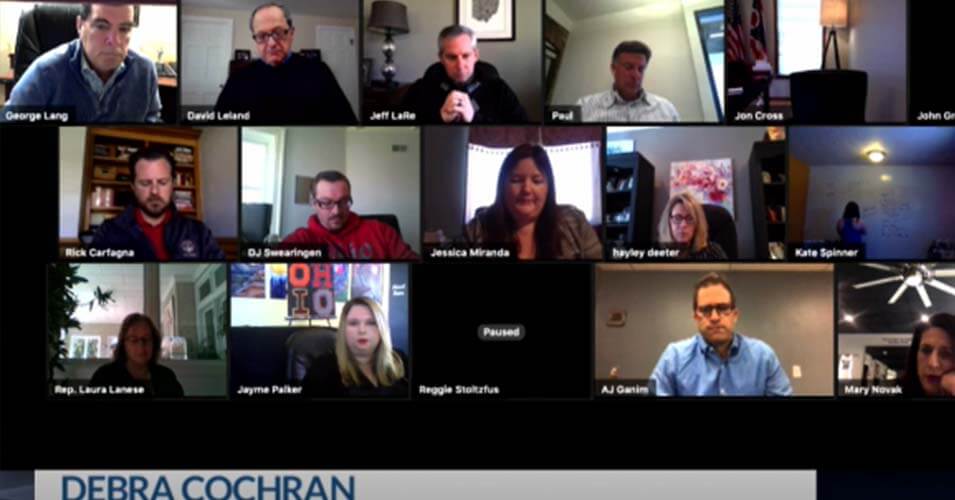 Members of the Economic Recovery Task Force are seen at a virtual meeting on Monday, April 20.
ShareTweet

Conspiracy theories, general downplaying of the seriousness of COVID-19, and allegations the governor shuttered the state economy with bad intent.

The Republican chairman of the Economic Recovery Task Force allowed all of this during Monday’s meeting. But there was one thing State Rep. Paul Zeltwanger, R-Mason, would not stand for — any effort to push back against those claims.

The task force, made up of 24 state legislators, was created earlier this month as an open forum to discuss ways Ohio can safely rejuvenate the economy amid the coronavirus pandemic.

It has devolved, however, into an open platform for the airing of grievances against the government and unemployed Ohioans. These voices have largely overshadowed those of other speakers, who have given calmer, albeit alarming presentations about how the economic shutdown has negatively affected their businesses.

A prime example of the turn the meetings have taken was the presence of racetrack owner Bill Bader Jr. during Monday’s virtual meeting. Bader is the owner of Summit Motorsports Park in Northern Ohio who made state and national news when he announced plans to defy the state’s shutdown order by reopening his racetrack.

“I’m not asking, I’m opening,” he said in a Facebook video. “Summit Motorsports Park is not going to wait for permission.”

Out of the hundreds of proposed guests made to Chairman Zeltwanger, Bader was among the few rewarded with an opportunity to speak directly to lawmakers on the task force. As the Ohio Capital Journal previously reported, nearly all guests during the task force’s first week were past donors to Republican campaigns. Bader continues that trend — in 2018, he donated $1,000 to the campaign of GOP task force member Rep. Dick Stein of Norwalk, public campaign finance data shows.

On Monday, Bader shared unfounded allegations about the government’s response to COVID-19 and lashed out at those who have criticized his Facebook statements.

“This is an open forum, as you’ll see,” Zeltwanger told Bader, affording him free range the chairman would later not allow for Bader’s critics. “We’ll hear all sides and all perspectives, so feel free to share openly.”

Bader did so, telling lawmakers of his belief that Gov. Mike DeWine’s shutdown orders were “politically motivated” and only carried out as a means to hurt President Trump.

Rep. David Leland, D-Columbus, pushed Bader to clarify: “Do you really believe that Gov. DeWine and Lt. Gov. Husted’s motivation for keeping us safe in the state of Ohio was really a sham just to get rid of the president of the United States?”

“Are there truly 41,000 fatalities due to COVID-19?” Bader wondered about America’s death toll, a figure widely confirmed by the Centers for Disease Control and other sources.

While Zeltwanger let Bader speak freely about his theories, only when Leland tried responding to the COVID-19 death statistics did Zeltwanger step in.

Zeltwanger said he wanted to “set a precedent” to not “go back and forth on questions.”

As for the government making up statistics and DeWine shutting down Ohio to spite Trump?

“I think that’s up to everybody to do their own homework on that,” Zeltwanger said, moving on to the next speaker.

Later in the meeting, craft store owner Debra Cochran from Southeast Ohio began her testimony by taking issue with the comments from Bader and another guest.

“I’m a little frustrated already this morning just listening in to some of the commentary that’s being presented,” the Nelsonville businesswoman said.

Cochran said she too wished her business The Pyrple Tyrtle was still open, but disagreed with Bader that the government overreacted in trying to keep Ohioans safe. She also made reference to another guest who repeated a common task force talking point that workers may prefer to stay on unemployment rather than returning to work when the crisis is over.

“I’m adamantly on the other side of that issue,” Cochran said.

“I’m going to ask out of respect for everyone that’s coming on here that we don’t refer to anybody else’s comments,” he said.

The chairman defended the clamp down on cross-talk as being a matter of protecting free speech.

“I actually took an oath to uphold the Constitution, which the First Amendment is the right of free speech,” he said, seeming to suggest that this freedom means not facing scrutiny. “What I’m learning for sure in this is that everybody has a different perspective … everybody has a right to their own opinion right now.”

Speaker of the House Larry Householder, R-Glenford, has not been publicly involved in the hearings. However, it was he who announced the task force’s formation and the selection of its members.

The request for comment has not yet been answered.

Though Republican lawmakers have not expressed opinions about DeWine as controversial as Bader’s, some have been no less vocal in their public criticism of the governor’s actions.

State Rep. Jon Cross, R-Kenton, has accused DeWine and Ohio Department of Health Director Dr. Amy Acton of scaring Ohioans with their daily press conferences. State Rep. Nino Vitale, R-Urbana, has referred to the health department’s data as being “guesswork” and wrote a letter to DeWine encouraging a swift reopening.

Vitale: gov’t should not work to protect Ohioans’ lives because death is “inevitable.” pic.twitter.com/DnHMvRioVB

On Monday, Vitale once again sought to downplay the seriousness of the virus. He quoted a headline from the Wall Street Journal: “New Data Suggest the Coronavirus Isn’t as Deadly as We Thought.” He did not mention the article quoted is an opinion column labeled by the WSJ as “Commentary.”

The task force is set to meet again Tuesday at 10 a.m. A guest list has not yet been announced.