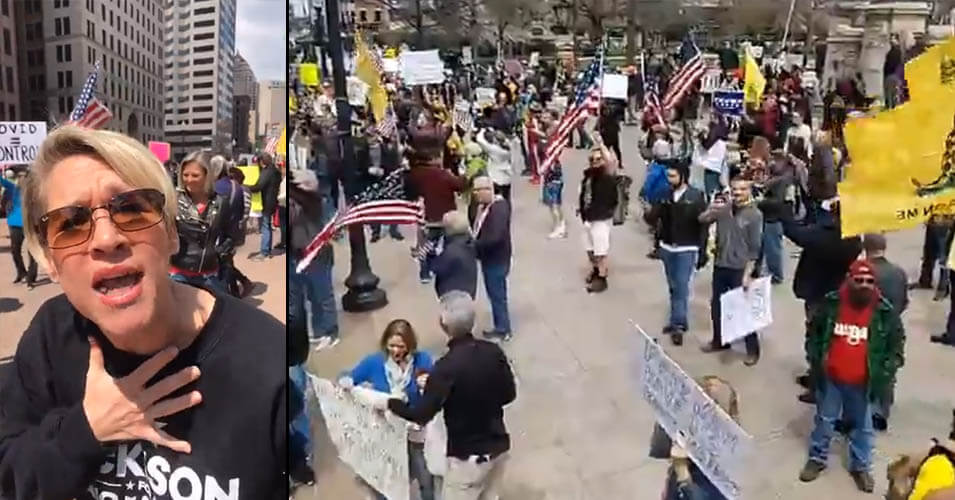 Ohio state senate candidate Melissa Ackison (R-Marysville) isn’t giving up on protests against Gov. Mike DeWine’s stay-at-home orders amid the novel coronavirus pandemic, leading yet another protest in Downtown Columbus near the Ohio Statehouse on Saturday.

The protest, organized by a handful of far-right groups and militias throughout the state such as Ohio Gun Owners, was dubbed a “drive-in protest,” which gave participants the option to stay in their cars, drive by the Statehouse, and honk their horns instead of violating social distancing guidelines by protesting on-foot.

Still, that didn’t stop dozens upon dozens of protesters holding signs, wearing Trump hats, and yelling chants such as “O-H-I-O, DeWine’s got to go!” and “Reopen Ohio Now!”

Ackison said in a Facebook Live video that the people attending the protest are “beautiful patriots.”

“Help us! Do the right thing!” Ackison exclaimed in the video.

Critics of the events, where protesters are often seen flaunting social distancing regulations and not wearing masks, say President Trump has added to the confusion.

“These are people expressing their views. … They seem to be very responsible people to me,” Trump said of people protesting stay-at-home orders. “But they’ve been treated a little bit rough.”

Ackison, a small business owner and conservative activist from Marysville who is currently a candidate in the Republican primary for the 26th district Ohio Senate seat, made national headlines earlier this week after a photo of her and several other pro-Trump protesters yelling into the windows of the atrium at the Ohio Statehouse went viral.

Ackison, who is running against current State Rep. Bill Reineke (R-Tiffin) in the GOP primary for the 26th district state senate seat, has previously called for Gov. DeWine’s impeachment over his response to the coronavirus pandemic, including the stay-at-home order and reworking of Ohio’s primary election that was originally scheduled for March 17.

DeWine’s actions have been recognized as some of the most aggressive throughout the country, with The Washington Post writing that his response has become a “national guide to the crisis.” His administration has closed K-12 schools, issued a stay-at-home order for non-essential tasks, ordered the closure of businesses deemed non-essential, and more.