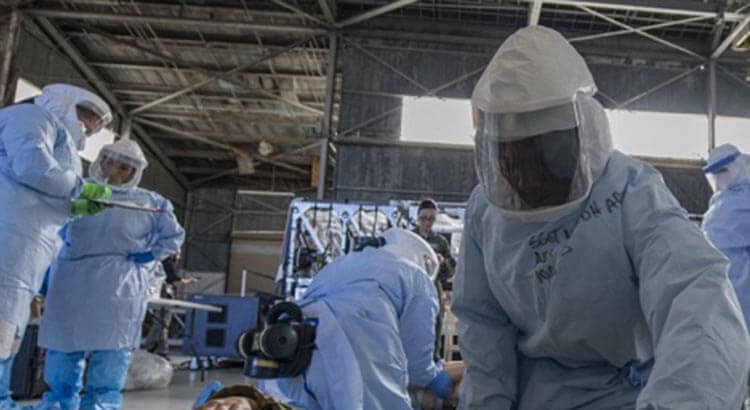 The same day the first Ohioan known to be infected with COVID-19 began to display symptoms, the state Department of Health received its first testing kit from the CDC.

Two of the three reagents that comprise the kit were faulty, according to ODH Director Dr. Amy Acton. Samples from suspected cases were sent to CDC labs. Patients had to wait it out.

The bungled kit gave the virus a head-start as it likely spread on, undetected.

That was Feb. 7. Only on March 7 was the state of Ohio able to independently begin testing people for COVID-19. Two days later, the first three citizens tested positive in Cuyahoga County.

“We know we have widespread, community transmission,” Acton said Wednesday.

The episode underscores a recurring theme playing out on a national level. A virus is spreading in the United States well beyond the health care system’s ability to detect it.

The CDC did not immediately respond to a request for comment.

Acton said the department’s current models estimate between 40% and 70% of the population will be infected over the course of 12 months.

She has cited a study from The Imperial College of London that predicts 2.2 million Americans would die in an unmitigated COVID-19 outbreak. Mitigation, however, can halve that number. The modelling, it should be noted, is based on assumptions about the disease that could prove wrong with further research.

The CDC has provided the state with three test kits, which Acton has estimated can test 1,200 to 1,500 people. Private labs and area hospitals are testing patients but on a limited basis.

As of Monday evening, more than 9,300 Americans have been diagnosed with COVID-19 according to data from Johns Hopkins University — 150 of them have died.

Despite public assurances from President Donald Trump, Gov. Mike DeWine affirmed Wednesday that testing will be restricted to the elderly, the immunocompromised, and health care workers.

“Our testing capacity is limited,” DeWine said. “In all likelihood, it will remain limited.”

Public health experts and officials have praised DeWine and Acton for taking aggressive steps to stymie the spread of the virus, such as banning mass gatherings and closing schools, universities, sporting events, restaurants, bars, gyms, hair salons and even postponing a primary election.

However, they agree the lack of testing is a hindrance.

“It would have been much better had these tests been available a few weeks ago,” said Richard Hodges, who directed ODH under the prior administration. “But I don’t know who’s more out front of this than Ohio.”

William Miller, the senior associate dean for research at Ohio State University’s college of public health, said the lack of testing kneecaps the ability to understand a lot about the virus and how it spreads.

“We should have had tests ready and available two months ago,” he said. “That would have been really proactive. When you look at the way South Korea responded with really aggressive isolation and testing of people that were exposed — we were simply woefully unprepared for that.”

Along with Ohio, several states received test kits that were inconclusive or only partially accurate, according to NBC.

U.S. Sen. Sherrod Brown, D-Ohio, said the U.S. was “unprepared as a country” in response to a question about the lack of testing. He praised state officials like DeWine. However, he criticized the president for eliminating the National Security Council’s global health security office, which surveils for and responds to epidemics. Trump later claimed someone else in his administration decided to do so.

“We have a Republican governor in Ohio that has done this right,” Brown said. “We have a president of the United States who blamed everybody but himself.”

Epidemiologists measure three key metrics of a virus: infectiousness, or the probability a person gets sick after exposure; contact rate, or how many people an infected person physically encounters; and duration, how long an infected person stays sick.

Steps DeWine and Acton have taken, Miller says, target the contact rate. The only thing people can do now to control the virus, is behave in a socially responsible way and cut down on that rate by staying home.

“This is a circumstance where, very truly, my behavior affects everyone around me,” he said.

Public heath officials and DeWine have repeatedly emphasized the need to “flatten the curve,” or slow down the spread of the virus and not overburden the health care system at a given point in time.

Researchers from Harvard University, working with journalists at ProPublica, published interactive research Tuesday analyzing bed capacity in the nation’s hospital markets. Their research predicts “vast communities in America are not prepared to take care of the COVID-19 patients showing up.”

This includes Ohio, in which only a best-case scenario will spare several hospital markets from overburdening, which can consist of doctors deciding who gets a ventilator and who does not.

“It’s not difficult to conceive of a hospital being overwhelmed with serious cases, and in addition, hospitals becoming settings of transmission of disease,” Miller said.

On Wednesday, DeWine and members of his administration framed steps like social distancing, working from home, and avoiding others when experiencing symptoms of COVID-19 as a patriotic act.

He said we’re at war with an invisible, parasitic enemy. Cutting the virus off from new hosts is the only way to win.