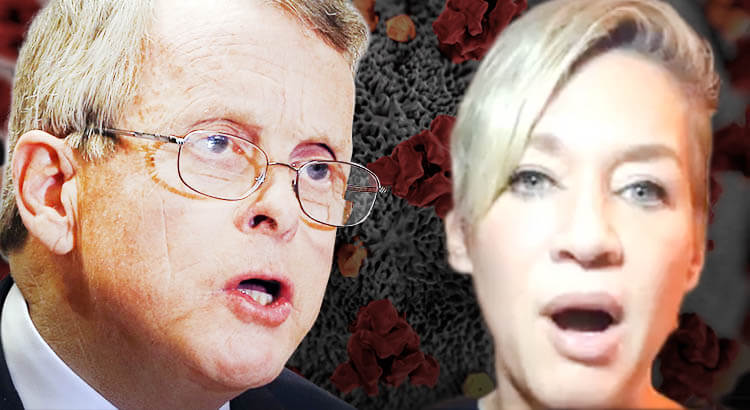 Melissa Ackison, a Republican candidate for the Ohio Senate, is calling for the impeachment of Governor Mike DeWine, a fellow Republican, over the actions his administration has taken in response to the novel coronavirus pandemic.

After President Donald Trump told governors that new federal guidelines could allow states to ease up coronavirus restrictions, Ackison said in a Facebook post on Thursday that she is “praying Dr. Acton will use this opportunity to NOW tell the TRUTH and OPEN OHIO BACK UP!” Ackison’s post came shortly after it was reported that the United States has surpassed China and Italy in coronavirus cases, leading the world in confirmed cases for the first time.

“The Ohio General Assembly must act! Governor DeWine is destroying the American ideal of ‘Ruling by Consent of the Governed!’ In America, the PEOPLE choose who represents them, and government does not decide when they choose!” the petition reads in part.

Ackison’s sharing of the petition came a day after she launched attacks against DeWine on her campaign Facebook page over his recommendation that Ohio’s primary election be postponed, claiming he is trying to “rig” the election against conservatives.

“They ARE defying the separation of powers,” Ackison, a self-described “constitutional conservative,” wrote in a Facebook post. “They have the Ultimate authority to quarantine or isolate…they picked neither! They are attacking our elections!!!!”

Ackison claimed Acton, who was appointed to direct the Ohio Department of Health by DeWine in 2019, is an “Obama holdover” and attacked her for “fundraising for Planned Parenthood.”

Ackison received over 700 comments on her post calling for DeWine’s impeachment, with some of her supporters backing her up, but the majority of comments appeared to be in disagreement.

“I will now be actively advising friends, family and neighbors across the political spectrum to support anyone but you. I am a fourth-year medical student 6 weeks away from graduation. Our medical school, like medical schools all across the country, just pulled students off of their clinical rotations due to the unprecedented nature of this crisis. I’ve suddenly come into a lot of free time and, thanks to the wonders of technology, I can now – from the comfort of my own home – educate the public about your inclination for reckless, political self-preservation over and against the health and safety of the electorate you claim to serve. Shame on you,” a fourth-year medical student from Tiffin commented on Ackison’s post.

“Super annoyed that you are not putting the health of our people above your own personal campaign. Seriously considering looking at other candidates,” a Mt. Gilead woman commented.

“Sorry but I think dewine is doing a very good job especially in these trying times. I agree with you on many things but definitely not this,” another woman commented.

DeWine’s actions have been recognized as some of the most aggressive throughout the country, with The Washington Post writing that his response has become a “national guide to the crisis.” His administration has closed K-12 schools for at least three weeks, issued a stay-at-home order for non-essential tasks, ordered the closure of businesses deemed non-essential, and more.

“We continue to evolve, every day we continue to have more facts. We process more information,” DeWine said during a press conference.

Ackison is running in the Republican primary for the 26th district state senate seat against current Rep. Bill Reineke (R-Tiffin) in what has been called the most contentious primary race in Ohio state legislative history.