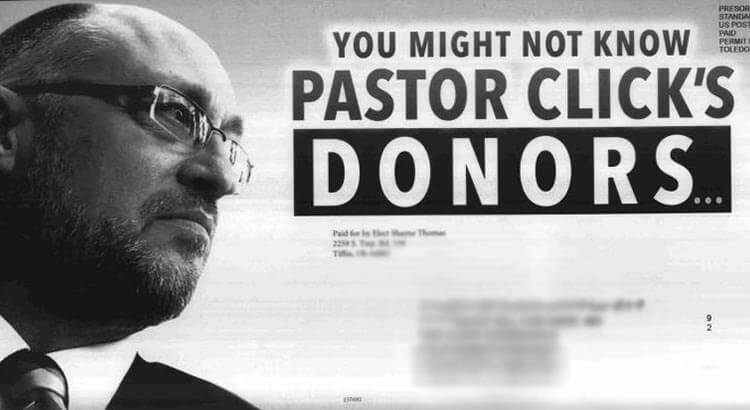 The mailer, paid for by the Elect Shayne Thomas committee, highlights the fact that Click has received the majority of his campaign contributions — over 82% — from Mike Gibbons, a Cleveland-based investment banker and failed 2018 U.S. Senate candidate.

Click and Thomas are facing off in a three-way Republican primary race for the 88th district Ohio House seat, which includes all of Sandusky County and the majority of Seneca County. The seat has been held for three terms by Rep. Bill Reineke (R-Tiffin), who is currently running in his own primary race for the state senate.

In addition to Click and Thomas, Fremont-based environmental engineer Ed Ollom (R-Fremont) is running for the seat in the March primary.

According to the most recent campaign finance reports filed with the state, Shayne Thomas reported raising $20,870 for his campaign so far, with $12,000 of that coming from his wife, Angela Thomas.

Thomas reported expenditures of $9,471.93, the majority of which was for billboard advertising, and his campaign had $11,398.07 left on-hand.

On the other hand, Gary Click reported raising $12,080.35, with $10,000 of that coming from Mike Gibbons. The rest of the contributions were mostly from Indiana residents and other individuals outside of the 88th district.

Environmental engineer Ed Ollom reported raising $8,800, all of which came from himself.

Ollom reported expenditures of $7,635.89, the majority of which was for billboard advertising, and his campaign had $1,164.11 left on-hand.

Reineke has not made an endorsement in the race, but he has previously distanced himself from Click following a viral video that showed the controversial pastor berating Reineke’s opponent in the Republican primary for state senate, Melissa Ackison, at a local fair.

Shayne Thomas currently serves as president of the Seneca County Board of Commissioners. Thomas graduated from Seneca East High School in 1986, from the University of Toledo with a Bachelor’s Degree in 1990 and from the University of Wisconsin’s Graduate Banking School in 2004. Thomas also studied graduate economics and finance at Bowling Green State University. Thomas spent time working for Fifth-Third, National City and First Bank of Ohio from 1990-1999. In 1999, Thomas was named the Vice President of Commercial Banking at Old Fort Bank. In 2007, he left the bank to become the Vice President of Business Development at MGQ Inc., where he stayed until 2013. He also was a co-founder of MGQ Terminal from 2009-2015.

Ollom, a Fremont resident, works as an environmental engineer at National Electric Carbon in Fostoria.