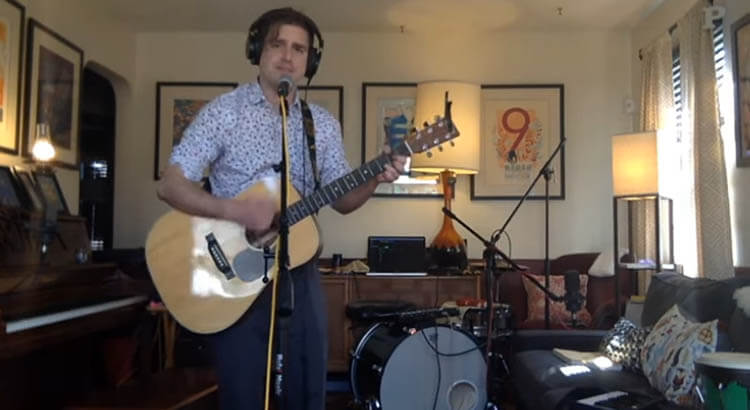 Joe Peppercorn played through all 214 songs The Beatles ever recorded in a webstream Sunday after showing a video Paul McCartney recorded for him, wishing him luck with the music marathon.

Covering the iconic band’s entire discography has been an annual tradition for Peppercorn, 39, since 2010. Usually the shows are at The Bluestone in Columbus and go from about noon to 2 a.m. with a changing cast of bandmates and a string quartet.

Read about the origins of the marathon show from Columbus Alive.

But as Peppercorn and people everywhere in Ohio hunkered down at home to curb the spread of COVID-19, he decided to set up a webcam and play every single song the Fab Four ever wrote together.

Every one of them. One after the other.

He calls it “Sgt. Peppercorn’s Marathon,” a play off the Beatles album.

It’s a distraction for Peppercorn, who has three kids to navigate through a global crisis. He still has some work as a church’s music director but lost his main source of income as a bartender. The marathon performance, he said, was just something to keep his mind off the co-occuring public health and economic crises and offer someone some joy.

Besides the wishes of luck from McCartney, there are musical appearances by his daughter, some beer drinking, and even a shoutout to Ohio Department of Health Director Dr. Amy Acton.

Here are some highlights of an interview with Peppercorn, edited for length and clarity.

OCJ: So the obvious question here, why did you decide to just, spur of the moment, go on the internet and play 12 hours of Beatles songs?

“I’ve been on my phone constantly, reading the news and freaking out and playing out every awful scenario in my head, over and over, every day. I’m feeling so distracted, I depended so much on my daily routine.

“There are parts that have been amazing, I’m reconnecting with friends on FaceTime, getting all this great time in with my family, but then just to have my life upended in tandem with everyone else, and to feel a lot of my friends hurting and struggling, I was like, I have to do something, if not for other people then for me to just stop reading the news constantly, and browsing Reddit and freaking out.

“I called a few friends and talked to my wife, asking ‘Is this a good idea or is this obnoxious?’ And they were like no, I want that. I want to think about something else right now”

I’m about 90 minutes in, and clearly, some songs are better than others, but to me, that seems like kind of the point?

You mentioned there’s plenty of whisky at the full marathon shows. Were you boozing Sunday?

“Oh yeah. After three or four hours, especially yesterday, was hard. Because man, usually there’s a giant audience and you can feed off of it. Just having deafening silence after every song was weird, and hard. To not have the feedback and be like, ‘Oh man, I botched that song,’ and it’s all quiet. It’s hard to gauge what you’re doing. I wasn’t going hard, but I had like four beers through the show.”

So what’s up with the shoutout to Amy Acton? That made me laugh.

“I think she’s doing a great job of conveying to people that the only way we’re going to be able to do this is if we do it together. That idea has been giving me comfort. I’ve been thinking of the way we normally operate, like every man for himself. I’m like, how are we going to survive this? I’m going to lose my house. But then, if we all get on the same page, we can do this.

“I have friends who are bartenders who have no income right now. I know they watch her every day, and they are comforted by watching her. Their situation is still awful, but they’re getting a lot out of watching her.”

How did you get Paul McCartney to cue you in?

McCartney’s intro video is a long story involving a cowbell, a devoted Peppercorn fan, and her efforts getting a letter of request onto McCartney’s desk. It ends with the rock legend singing the first licks of Love Me Do for Peppercorn’s show. You can read Columbus Alive’s telling of the McCartney video, or watch it at 11:15 in the video of Peppercorn’s marathon. It was unveiled in December at Peppercorn’s last marathon performance.

Now for the easy question: What are your five favorite Beatles songs?

“Dude. That’s like the hardest question, are you kidding me?

“It changes every day, but thinking about [Sunday], the songs where I was feeling it the most. I would say — Across the Universe, Dear Prudence, Things We Said Today, For No One, Ticket to Ride.”

As someone who knows the entire discography, what are three deep cuts people should know that they probably don’t?

“I Call Your Name, that song rocks. And it uses a reggae beat in the middle. Super weird.

“If someone didn’t know the entire Rubber Soul album, they wouldn’t know You Don’t See Me, that’s not a song I ever hear out and about. That song is just devasting and beautiful and also rocking.