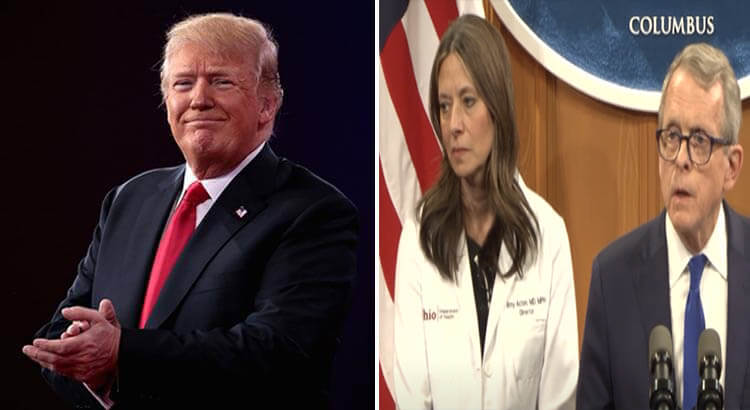 One offered sympathy, the other sarcasm.

Gov. Mike DeWine was sober and pensive as he addressed Ohioans about the state’s first COVID-19 death, a Toledo man who happened to be an old friend of his. The governor quoted scripture at length and offered condolences to the deceased’s family.

At his presidential lectern a day later, Donald Trump was told about a political foe self-quarantining from the deadly virus.

“(Sen. Mitt) Romney is in isolation? Gee, that’s too bad,” the president replied.

The differences between DeWine and Trump’s handling of this public health crisis extends far beyond emotional response.

The use of unproven drugs as treatment for COVID-19?

Ohio’s health experts expressly reject it. Trump is bullish about using them, saying he feels “good” about the drugs.

The closing of unessential businesses as a way to prevent further spread of the virus?

The consensus of Ohio’s health, political and business leader is this government intervention is necessary during an unprecedented crisis. Trump, meanwhile, retweeted an obscure Twitter user with 750 followers who wrote, “Flatten the curve NOT the Economy.”

The stark contrast reveals a vastly different message given to citizens by Ohio’s leaders versus those at the national level.

Trump’s messaging is far off-base from the medical consensus, such that he even clashes with his own health experts. This is evident in the ongoing dispute about two drugs, chloroquine and hydroxychloroquine, that Trump believes (without evidence) can be effective in treating COVID-19.

Trump, however, personally believes they are effective and said last Friday he hoped they would be “put in use IMMEDIATELY.”

….be put in use IMMEDIATELY. PEOPLE ARE DYING, MOVE FAST, and GOD BLESS EVERYONE! @US_FDA @SteveFDA @CDCgov @DHSgov

It took only a few hours for the director of the National Institute of Allergy and Infectious Diseases to publicly contradict that assertion.

At a White House press conference, and with Trump standing right behind him, Dr. Anthony Fauci was asked if the drugs could be used to treat COVID-19.

“No. The answer is no. The evidence you’re talking about is anecdotal evidence,” Fauci told the reporter.

Trump gave this defense of his views: “It may work and it may not work … I feel good about it. That’s all it is, just a feeling. I’m a smart guy.”

There are consequences to the president of the United States hyping unproven drugs during a national emergency.

“We can’t have a rush on this drug in asymptomatic people … there’s a limited supply of it,” Acton said.

The Ohio Board of Pharmacy was forced to enact an emergency rule on Sunday limiting access to the drugs for only those who require them.

There are also the health dangers associated with taking unprescribed medicine. One infectious diseases physician noted:

Please don’t take hydroxychloroquine (Plaquenil) plus Azithromycin for #COVID19 UNLESS your doctor prescribes it. Both drugs affect the QT interval of your heart and can lead to arrhythmias and sudden death, especially if you are taking other meds or have a heart condition.

Governors and state health directors have flexed their muscles this month in enacting major limits on social contact.

What began with a postponement of the Arnold Classic in Columbus led to DeWine and Acton working together to shut down schools, restaurant dining rooms and everything from movie theaters to zoos.

The strictest order yet came on Sunday, with the governor announcing a “stay at home” order through at least April 6. This forced the closure of businesses deemed non-essential and required Ohioans to remain at home (with certain exceptions).

Ohio leaders have defended the move as being necessary to enforce “social distancing” and prevent further spread of the virus. Even the Ohio Chamber of Commerce has supported the order, despite acknowledging the significant impact to businesses.

“Gov. Mike DeWine has once again demonstrated his unwavering commitment to to saving lives during this horrible pandemic,” the Chamber’s president and CEO, Andrew Doehrel, said in a provided statement.

“This announcement will undoubtedly cause further disruption to our economy and impact many employers and their employees,” he continued, “but let’s be clear: Ohio is still open for business, and the governor is doing the best to strike the right balance between protecting Ohioans and keeping the economy moving.”

At the White House, Trump is taking his cues from conservative voices who urge a more cautious, business-friendly approach. Fox News host Steve Hilton said during a Sunday evening broadcast, “there’s a much better way to flatten the economic curve.”

“You know that famous phrase, ‘the cure is worse than the disease?’ that is exactly the territory we are hurtling towards,” he continued. “You think it’s just the coronavirus that kills people? This total economic shutdown will kill people.”

WE CANNOT LET THE CURE BE WORSE THAN THE PROBLEM ITSELF. AT THE END OF THE 15 DAY PERIOD, WE WILL MAKE A DECISION AS TO WHICH WAY WE WANT TO GO!

A return to normal?

As the number of COVID-19 cases continues to rise dramatically throughout the U.S., Trump is still taking the view that things will return to normal in a short time.

States such as Ohio, Louisiana and Kentucky have issued stay-at-home orders for at least the next few weeks. Trump, though, is already encouraging a swift return to workspaces.

This push by Trump for America to return to normal may have influence on the federal Centers for Disease Control:

.@VP: The CDC tomorrow is going to issue new guidance which will make it possible for people who have exposed to the coronavirus to return to work more quickly by wearing a mask for a certain period of time.

In Ohio, it’s been a continuous effort from leaders to speak about the virus and response in serious, measured terms.

“This is not a joke, this is not a drill,” Acton said. “We all need to limit this exposure and stop the spread of disease.”

For Trump, it’s been a week of attacking the press, attacking state leaders and promoting his own reelection effort.

Whereas Acton’s message of “I am not afraid, I am determined” was shared throughout Ohio on Sunday, Trump had his own message on Twitter early Monday: “#Landslide2020.”