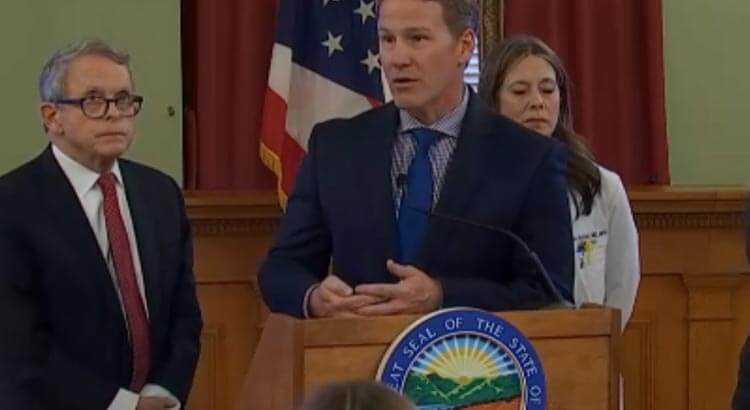 COLUMBUS — Governor Mike DeWine and Ohio Department of Health Director Dr. Amy Acton signed an order Thursday which bans mass gatherings of over 100 people in the state in an effort to stop the spread of COVID-19 amid a global pandemic. The governor also ordered all Ohio K-12 schools to close for three weeks.

Effective at the end of class on Monday, March 16, all Ohio public and private schools will be closed for three weeks through at least April 3. Each school will decide if remote and online teaching will be practiced during the three weeks, the Governor said.

“We know it’s disruptive to the families, but we have to do this if we want to slow this down,” DeWine said.

At the close of school on Monday is when the school closure starts until April 3. All K-12 schools: Public, private, charter. #COVID19 #COVID19OhioReady

The confirmed cases of COVID-19 in the state rose to five on Thursday. There are 52 persons under investigation and 30 people who have had negative tests returned. The fifth person who tested positive is a male patient at Mercy Health St. Joseph Warren Hospital in Trumbull County. He has no history of travel outside the state of Ohio.

A review will be made before reopening any schools, meaning the closures could extend past the three-week mark.

“We are in a crisis situation now,” said Amy Acton, director of the Ohio Department of Health.

As of Thursday afternoon, the Ohio Department of Health says five people have tested positive for coronavirus, but Gov. DeWine said he was told by medical experts that the number is likely to double in a week’s timespan.

“There’s going to be a light at the end, but it’s going to get darker,” DeWine described.

Current data for #COVID19 in #Ohio:

“We do most definitely have community spread.”
– @DrAmyActon

In addition to closing schools, mass gatherings of over 100 people are now banned in the state.

This excludes shopping malls, airports, typical office environments, and schools, as those are defined as areas where 100 or more people may be “in transit.” It does not include athletic events that exclude spectators. Immediate family members of athletic participants may be present. The order does not apply to religious gatherings, weddings or funerals.

In addition to the orders closing schools and shutting down public gatherings, DeWine also recommended increased limitations to psychiatric appointments and reducing visits to the Department of Children and Family Services.

The order prohibiting specific mass gatherings will not prevent voters from casting a ballot on Tuesday, March 17, but some polling places have been relocated.