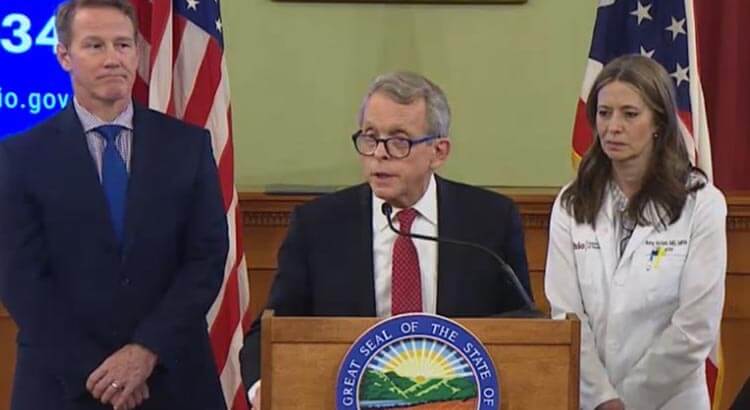 The next 14 days were a whirlwind of 439 subsequent positive diagnoses, six deaths caused by the virus, a primary election postponed with 12 hours’ notice, a blanket cancellation of K-12 in-person classes, and a “stay at home” order compelling non-essential businesses to close and people to stay in their homes.

On March 9, the day Ohio officials announced the first positive cases, there were 109,577 confirmed cases worldwide. By Monday, there were nearly 333,000, according to data from the World Health Organization.

The department has issued tiered guidelines for who should be tested. From highest to lowest priority:

The guidelines specifically state testing is not recommended for people with symptoms who are not elderly or diagnosed with preexisting conditions.

As of 2 p.m. Monday, 104 people — nearly 25% of Ohio’s known infected population — have required hospitalization after being diagnosed.

.@VP: The CDC tomorrow is going to issue new guidance which will make it possible for people who have exposed to the coronavirus to return to work more quickly by wearing a mask for a certain period of time.

Six people have died after being infected, per state data: two in Franklin County, and one person in Cuyahoga, Erie, Lucas and Stark counties.

New cases are being detected at an accelerating rate.

During the first week of Ohio’s outbreak, there were an average of 6.7 new cases per day.

During the second week, that figure was 56.

The numbers, however, skew toward testing capacity, warns Dr. Heidi Gullett, medical director for the Cuyahoga County Board of Health.

“When you have increased testing capacity you will find more cases,” she said Friday. “That doesn’t necessarily mean there aren’t more cases in a similar prevalence in other parts of the state.”

Despite being detected March 9, Acton said officials have tracked COVID-19 illnesses back to at least February 7.

Dangerous outbreaks are playing out across the state.

In Miami County, 32 people are showing symptoms after an outbreak was reported at Koester Pavilion assisted living center in Troy. Seventeen people have tested positive, as of Monday afternoon. Results are pending on the rest.

Three Koester residents, all between 83 and 94 years old, have died, although available testing has only definitively linked one death to the outbreak, according to Miami County Health Commissioner Dennis Propes on Monday.

At the nearby Springmeade Health Care Center, four residents and one staffer have also tested positive, Propes said.

The Hennis Care Center, an assisted living center in Tuscarawas County, has thus far avoided the infections but lived through the fear. A person there interacted with 22 residents and three workers on March 13. On March 20, that person tested positive for COVID-19.

Brian Hennis, an executive at the facility, said Monday there are no confirmed or suspected cases and no residents have displayed any symptoms. He did not answer inquiries about who has been tested.

Beyond the state’s health, the virus has wreaked havoc on Ohio’s politics and economy.

March 17 was supposed to be Election Day. Around 10 p.m. the evening prior, DeWine and Secretary of State Frank LaRose, arguing polls would become a hotbed of viral transmission, ordered the election delayed.

No in-person votes were cast. The question of when and how the primary election will be carried out remains unclear. The General Assembly is likely to hash out the matter this week, as a legal challenge to the postponement wages on.

A March Madness basketball tournament, with play scheduled in Ohio, was canceled. Professional basketball and baseball leagues have been canceled or delayed as well.

The “stay at home” or shelter in place” order begins at midnight Monday evening. It lasts until April 6, but DeWine indicated it could be extended.

The economy has steadily plummeted all the while, as businesses have laid off employees and braced for closures.

Quoting First Lady Eleanor Roosevelt on Sunday, DeWine remarked at the extraordinary course of the prior two weeks.

“This is no ordinary time,” he said.

For information on COVID-19 in Ohio and copies of all public health orders, you can visit the state’s coronavirus website here.

For information on how to avoid the virus, what symptoms are like and what to do if you think you’re infected, you can go to the CDC’s COVID-19 page here.