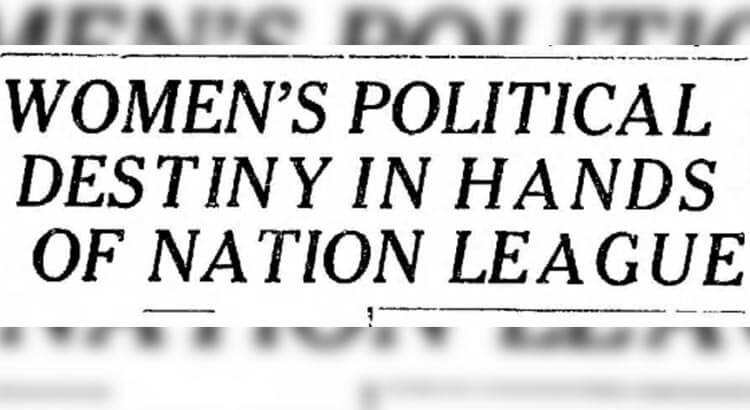 The League of Women Voters made headlines all throughout Ohio in 1920.
ShareTweet

It took nearly 150 years after the Declaration of Independence was signed for women to fully achieve the right to vote.

Once they got it, though, it took no time at all for the male-dominated political establishment to seek to capitalize.

Nowhere was that more true than in Ohio. The 19th Amendment giving equal voting rights for women was ratified a century ago, just months before the 1920 presidential election. That contest pitted two Ohioans against each other, Warren Harding and James Cox. In the fall of 1920, Democratic and Republican officials alike worked to appeal to this newfound voting bloc and bring them into their respective coalitions. Such is politics.

Emerging in this climate was the League of Women Voters, which in 2020 is celebrating 100 years as a leading American civic organization.

There were many other groups over the preceding decades involved in building momentum toward achieving women’s suffrage. The League was born at the tail end of that fight, originating with a stated goal of educating women about government and empowering them to wield their burgeoning political influence.

Ohio played an important role in this fight. The state was among the first to ratify the 19th Amendment in June 1919, just weeks after it was first passed by Congress. The first national director of the League of Women Voters was an Ohioan.

After full voting access was achieved, residents in Cuyahoga County elected the first woman to any judicial post in the entire country. She would prove to be an important trailblazer in American politics.

The League remains active a century later. There are 32 local chapters around Ohio, from Ashtabula to Youngstown.

A subsequent article from the Capital Journal will highlight the work of the League of Women Voters in today’s political climate. The following is a look back at the creation of the League and Ohio’s role in securing equal voting rights for women.

The League of Women Voters counts Valentine’s Day 1920 as its official founding date, though talks of starting the group began a year before.

The vast number of groups pushing for women’s suffrage in the 1910s demonstrated widespread grassroots support. Still, there grew a desire to consolidate the disparate efforts together.

This was a main point of discussion at the National Woman Suffrage Association’s 1919 convention. Members of the group once co-founded by Susan B. Anthony made plans to soon transform into the League of Women Voters. President Woodrow Wilson sent a cablegram from Washington, writing: “I honestly hope the suffrage amendment will soon be adopted.”

Actually, suffrage was just one part of the policy platform highlighted at the St. Louis convention. Other issues discussed included ending child labor; establishing a minimum wage and an 8-hour work day; making school mandatory for students up to 16 years old; and guaranteeing equal pay for both genders.

Those present also argued for ensuring health care coverage to all Americans, maternal leave for working mothers and protecting the rights of workers to organize and collectively bargain.

Congress passed the Susan B. Anthony Amendment a few months later, and suffragists then turned their attention to the state legislatures. They needed three-fourths of the states to ratify the amendment, or 36 states.

When the state ratification process began, 15 states already had full suffrage and 29 states allowed for women to vote in presidential contests. The point of ratifying this amendment was to give full voting rights to every American woman to vote in every election.

“We have finally reached the goal for which we have been striving for these many years,” wrote columnist Rose Giddings Haines in the Hamilton Daily Republican.

Haines made clear that the League of Women Voters was (and still is) a politically independent group welcoming of all members.

“The League is not a woman’s political party,” Haines wrote, “neither has it any desire to exclude men from its activities.”

Ohio was the fifth state to ratify the Susan B. Anthony Amendment, on June 16, 1919. Suffragists stayed active throughout the coming fall and winter. Cincinnati women gathered in early 1920 to hear about the progress and learned that 22 states had ratified it to that point.

State legislatures did not meet as often back then as they do today. Some went more than a year in between regular sessions. Legislators in more than a dozen states had to convene special sessions in order to vote for or against ratification.

In mid-February, the National Woman Suffrage Association met again for its annual convention. It was officially decided that this convention in Chicago would mark the end of the association and the creation of the League of Women Voters. Attendees were met with wonderful news at the convention’s outset: Idaho had just become the 30th state to ratify.

Only six more to go.

One notable delegate at this convention was 79-year-old Helen Ekin Starrett, a famous suffragist with ties to Ohio. Born in Pennsylvania, she helped to run the Union Female Seminary in Xenia during the Civil War. She later served as a newspaper editor who pioneered the use of newspaper advertising to advance the cause of women’s suffrage. 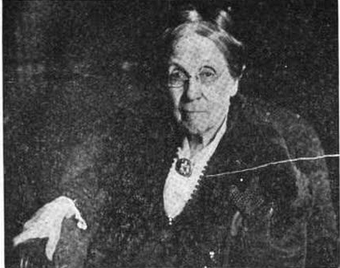 Starrett had attended the original suffrage convention led by Anthony a half-century before. This made her one of the only people to have attended both that first convention and the later one in 1920. It was said that everywhere Starrett went in Chicago that week, a crowd of young women followed in admiration. (Starrett would live just long enough to see the amendment succeed. She died later that winter.)

Another important bit of Ohio news came out of this convention: Girard native Elizabeth Hauser was elected national director of the League.

In those days, most stories about the suffrage movement were placed on a newspaper’s “Woman’s Page” or “Society Page.” These sections, buried deep in the hefty newspaper editions of that era, were likely ignored by most of a publication’s male readership.

One wonders how public opinion might have been affected had this subject appeared alongside other government stories more prominently displayed.

It took success for the issue to reach the front page. Thanks to the Tennessee state legislature, the Canton Daily News reported this A1 headline on Aug. 18, 1920: “Suffrage Is Ratified; 27 Million American Women Will Vote In Fall Election.”

Women celebrated all over Ohio. In Cleveland, the local League chapter encouraged residents to decorate their homes and offices with an American flag.

There happened to be a pending referendum which would have rescinded the rights Ohio women had already earned to vote in local and state elections. However, it was believed the federal amendment would supersede any statewide voting rights measure.

The Cincinnati Commercial Tribune reported that 80,000 women in Hamilton County were expected to vote in the presidential election that November.

“No doubt both parties will do their utmost to please the women and to get their votes,” the Tribune reported, “and it is most likely they will recommend the appointment of some as election officers.”

The growing number of League chapters wasted no time in encouraging women not only to vote, but to campaign for public office. The primary election had already taken place, but three Ohio women decided to run in the general election as independents.

Dora Sandoe Bachman was an easy pick in Franklin County. She had already made history in 1913 as the first woman elected to the Columbus school board, and this time around campaigned for Franklin County Common Pleas Court judge.

Etta Freeman Lane of London was the first woman to campaign for the state legislature. She and Bachman both lost. 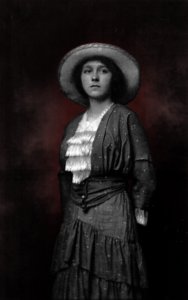 That wasn’t all. Two years later, she made history as the first woman to serve on a state’s highest court — the Ohio Supreme Court. Allen served two six-year terms until she once again made history in 1934.

President Franklin D. Roosevelt nominated her to the U.S. 6th District Court of Appeals, and she was unanimously confirmed by the Senate. Allen would go on to serve for 32 years, including several months toward the end as chief judge. She died in 1966 at the age of 82, and there is modern support for renaming a Cleveland courthouse in her honor.

Over time, women broke through the glass ceiling. The first female state legislators of the Ohio House and Senate took office in 1923. The first female sheriff in Ohio, Maude Collins, was elected in Vinton County in 1926. Nancy Hollister became the first woman to serve as Ohio governor, albeit for only 12 days upon the departure of George Voinovich.

There remains a disparity in some Ohio public offices. Just 29% of the nearly 1,000 county elected officials are women, a review from the Ohio Capital Journal found.

The League of Women Voters has remained an active, important organization in this state for the past 100 years. To this day, chapters host candidate forums in communities ranging from Amesville (pop. 150) to Columbus. Members help Ohioans to register to vote and contribute to voters/issues guides.